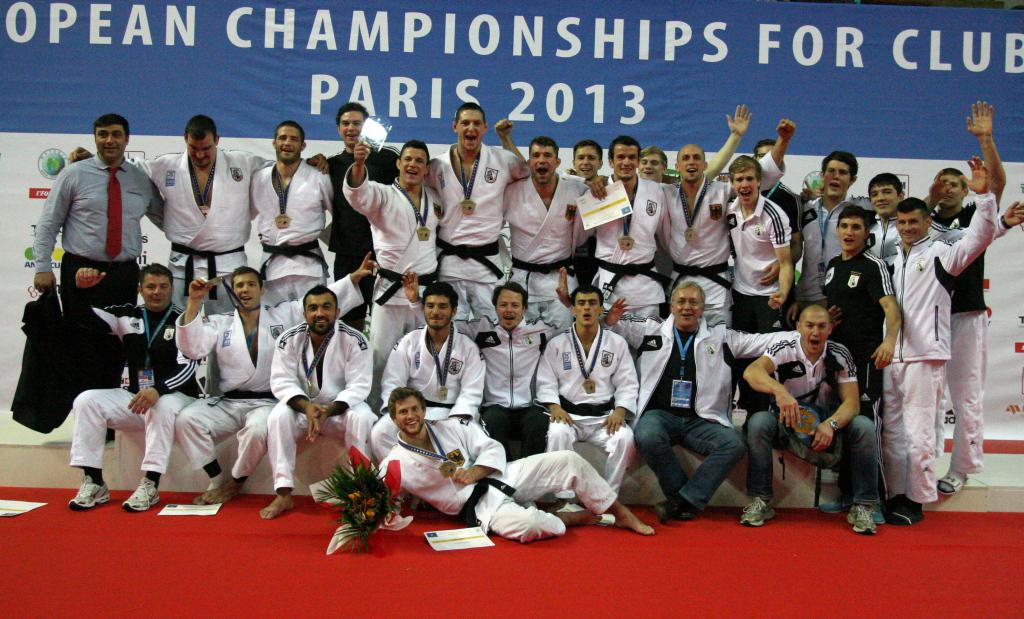 Levallois was the team that won the European club title in 2011 which was taken over by Abensberg last year. Last year’s final Yawara Newa was defeated, but despite the rich club history in Europe both topclubs had never met in a final before. The first match though was a sensational win for Dimitri Dragin. The little Frenchman was good the whole day and scored valuable points for the French team. Dragin started with a waza-ari against the world’s number three Georgii Zantaraia. This year the Ukrainian judoka defeated Dragin in Samsun. In the second match 25-year Christopher Voelk fought against the steaming Pierre Duprat. The Frenchman had previously defeated Olympic Champion Mansur Isaev in the semi final and the French Champion has developed in a spectacular way this year. He won the European bronze in Budapest and started with the GP victory in Düsseldorf. So a victory against Christopher Voelk was in the make, but it was Voelk who led the match at first place by yuko and due to a bad knee injury of Duprat he couldn’t finish the match which made the equalizer on the scoreboard, a key match and really unfortunate for the strong Duprat. Sven Maresch only had to bow as Levallois had no one in the category U81kg, Alain Schmitt got injured. Ilias Iliadis defeated Alexandre Iddir U90kg. Both fighters fought in Antalya for the ECC in Antalya in 2011 where the Greek also won his match. This time it was the final and Iliadis scored the decisive point for his club retaining the European Club title. While dancing Andreas Toelzer had to keep his mind up for the last match. His opponent was Cyrille Maret, the man who had been so important in the semi final against Yawara Newa when he threw Aslan Kambiev for ippon. The French Champion U100kg and winner of the GP in Düsseldorf is approximately 30 kilos lighter than Toelzer, but his speed could not prevent Toelzer to benefit and score a waza-ari after 100 seconds. Toelzer showed his excellent skills and threw Maret for ippon 20 seconds later. TSV Abensberg is superior in Europe and the team thanked the tall Toelzer for his amazing career. Abensberg won the title because of convincing victories against Carabinieri Roma (ITA), Adygea Maykop (RUS) and Dinamo Alania (RUS) in the semi final. What a day in Paris with amazing judo, great heros and lovely judo for the passionate fans.