TURKEY DOMINATED THE FINALS AT THE JUNIOR EUROPEAN CUP IN PAKS 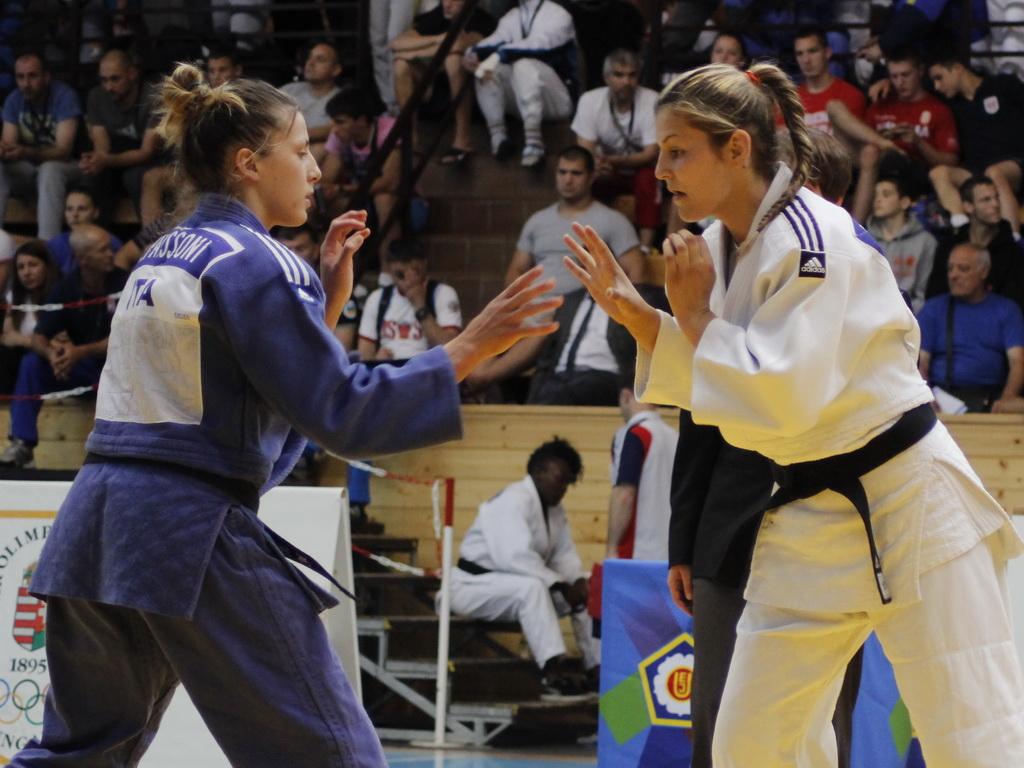 Paks is the 9th Junior IJF World Tour event in Europe. It started on the 15th of March in Coimbra, Portugal. At the second day of the event, Turkey claimed most of the medals whilst the host nation earned and additional three medals to their collection. Turkey, Ukraine and Hungary were to finish on the top of the medal table.
Out of the remaining eight weight categories, in the U55 category there were 19 competitors with Turkey taking up half of the space on the podium. In the bronze medal contest Fabian Haessner (GER) was up against Ferdi Alti (TUR), where Alti soon overcome his opponent after scoring two waza-ari. The other bronze medal contest was led by the number one seeded, Valentin Alipiev (BUL) as he overcome Artem Lesyuk (UKR). In the final, Turkey was to claim the gold by Oguzhan Karaca (TUR) after defeating Guy Smolansky (ISR).
U55 Final results
1. KARACA, Oguzhan (TUR)
2. SMOLANSKY, Guy (ISR)
3. ALIPIEV, Valentin (BUL)
3. ALTI, Ferdi (TUR)
5. HAESSNER, Fabian (GER)
5. LESYUK, Artem (UKR)

Great Britain claimed two medals in the U63 category. First it was Katie-Jemima Yeats Brown (GBR) defeated Tatiana Zadorozhnaya (RUS) in the bronze medal by a waza-ari score from a right handed attack which she followed into osei-komi-waza to win the medal contest. The second bronzewas claimed by Adele Jakubcova (SVK). In the final British player and number one seeded, Lucy Renshall was up against the home crowd’s favourite, Gercsak Szabina (HUN). Renshall put up a good fight for the Hungarian however a single shido Renshall received at the beginning of the final was the deciding score at the end. Once more the Hungarian national anthem was played.

31 judoka was fighting for gold in the U60 category. Turkey almost won their second gold medal of today, however Fabio Basile (ITA)decided to dominate the final of this weight class and overcome his Turkish opponent, Sefa Gul (TUR) who then had to settle for silver. Bronze medal winners are number one seeded, Samuel Hall (GBR) and Denis Jurakic (SRB).

Ebony Drysdale-Daley (GBR) was the number one seeded among 20 players in the U70 category. At the end the British player had to settle for bronze medal. In her bronze medal contest she defeated Alessandra Prosdocimo (ITA). The second bronze was claimed by Lisa Dollinger (GER). Alexandra Samardzic (BIH) has not only won the final against Carola Paissoni (ITA) but became the youngest gold medallist at this tournament with age of 16.

Ukrain and Bulgaria collected a bronze each on the U66 category. Amongst the 42 competitor it was Dmytro Raskin (UKR) and Plamen Gurov (BUL) who made it to the podium place. In the final, Biagio Stefanelli (ITA) had the opportunity the let the Italian national anthem to be repeated, however Bogdan Iadov (UKR) did stop him from that after scoring Ippon against Stefanelli in the final.

Number one seeded, Melora Rosetta (ITA) missed out on the [odium place after a defeat against Ekaterina Inozemtseva (RUS) in the U78 category. Salanki Evelin (HUN) and Laura Donath (GER) were both going for the bronze medal, the only trouble that it was against each other. The Hungarian titan threw her opponent for Ippon to claim the second bronze medal. The gold medal was decided in-between of Anastasiya Turchyn (UKR) and Anna-Maria Wagner (GER). The Ukrainian national anthem was played to celebrate the victory of Turchyn.

The heaviest male category of day two was the U73 category with 45 competitors on the draw. Those who made it to the podium places were Pal Gyula (HUN) and Antonio Esposito (ITA) after both winning their bronze medal contest. Turkey lost out another gold medal after Elemer Szocs (ROU) overcome Murat Bektas (TUR) in the final of this weight class. Szocs won the one and only gold medal for his country throughout this tournament.
U73 Final results
1. SZOCS, Elemer (ROU)
2. BEKTAS, Murat (TUR)
3. PAL, Gyula (HUN)
3. ESPOSITO, Antonio (ITA)
5. RAICU, Alexandru Constantine (ROU)
5. HOJAK, Martin (SLO)

Anzhela Gasparyan (RUS) was the favourite of the O78 category, however at the end she had to settle for the bronze medal alongside her team mate Iuliia Lianichenko (RUS). Only 31 seconds is how long needed for Milica Zabic (SRB) to throw her opponent Anastasiia Sapsai (UKR) for Ippon in the final of this weight category. Zabic victory was the only gold medal Serbia collected throughout the weekend.

Three days training camp will take place in Paks before the majority of the competitors heading to their next destination of the IJF World Tour which will be also a Junior European Cup next weekend in Wroclaw, Poland.

Watch all the photos in our photo gallery: