Turkey keeps the tradition claiming a European U23 title 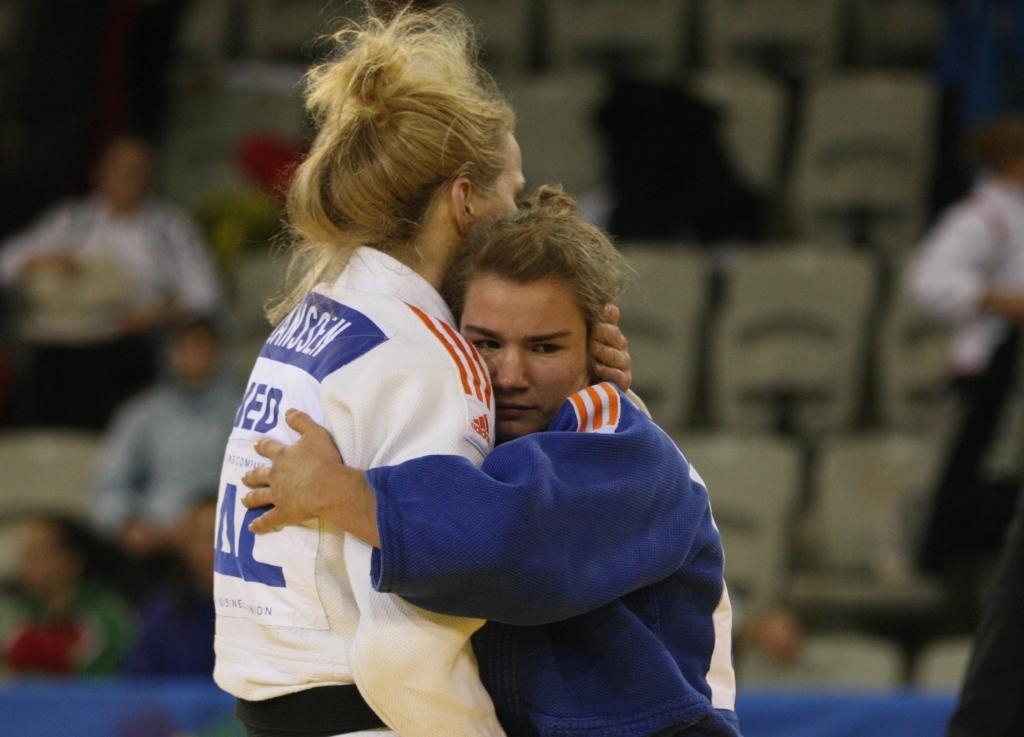 At the Green Hill European U23 Championships in Prague the category U48kg was surprisingly won Dilara Lokmanhekim of Turkey. She defeated the small strong Russian fighter Irina Dolgova. The little Russian dominated the beginning of the quality match with many scores for both fighters. Dolgova led by wazari and collected a yuko as well. With two minutes in the match the European U20 Champion came back in the match and scored the equalizer.

Fourty seconds for the end it was Lokmanhekim who claimed her second title of the year. Not just the U20 European but also this important U23 title. SO far Turkey hadn’t won this title in this category. A tremendous success for the strong women’s team. Last year Tugba Zehir won the European title U57kg and in 2010 she won U52kg.

Kelmendi takes first European U23 title for her country

Majlinda Kelmendi won the European U23 title after 51 seconds in the final in Prague. Kelmendi is by far the most experienced fighter in this category. The Olympian won many medals at the highest level events. She was a double European U20 champion and claimed the Junior world title two years ago. Despite the expectations she never fought at this podium of U23 Championships. But she Kosovarian performed well and won her four fights. In the semi final Kelmendi defeated Barbara Maros of Hungary.

The bronze medal was for Kosovarian Distria Krasniqi representing the IJF. Krasniqi didn’t have to fight due to an injury of Alexandra Florian who fought so well but was injured after her repechage match.
18-year Old Odette Giuffrida develops well and won the bronze medal U23. She struck with a devastating barai in her bronze final against Barbara Maros of Hungary.

The anthem of the IOC was played for Majlinda Kelmendi who was accompanied by her compatriot Krasniqi at this unique podium.

The final of the women U57kg was a unique final. Two Dutch women qualified for the finals in the strong category. Sanne Verhagen won four matches as well as Juul Franssen. Two potential Olympians for 2016. They fought eachother at top level three times this year, twice won by Verhagen, Franssen claimed the national title defeated her smaller rival. They met for the fourth time in two months. At the national Championships in October it was Franssen who won the national title. Coached by different trainers both ladies know eachother very well. No score for both fighters after two minutes but two year older Franssen surprised Verhagen halfway the match when Franssen struck with her tall legs and hit with a powerful left o-soto gari. She threw Verhagen by ippon and won her third European title in her career. The unique triple is in her hands built up since 2006 when she won the Cadet European title U57kg in Miskolc. Two years later she won the Junior title in Warsaw and in today she added the third possible European title in her young career.

Verhagen couldn’t smile too much after her second defeat, but the 20-year judoka will come back. She won a silver medal at the World Junior Championships in 2010 and is still progressing, sometimes with little gap. Juul Franssen knows all about the gaps and is fighting back with this great European title. Unique for the Netherlands that had never enjoyed two Dutch in the final of any European Championships in its rich judo history.

An incredible strong field with Andrea Bekic (CRO) who left the tournament after 23 seconds, Johanna Mueller (GER) who lost against Franssen, Nora Gjakova (IJF) who lost against the later bronze medallist Ivelina Ilieva (BUL). Tina Zeltner (AUT) was defeated by Gjakova in her first round.
In the poule of death Sanne Verhagen defeated double European Junior Champion Fabienne Kocher (SUI) and Emma Barkeling of Sweden.
In the fights for bronze Ilieva (BUL) defeated Manon Durbach (LUX) who fought a good tournament. Romanian Loredana Ohai (ROU) defeated Agata Perenc (POL) for bronze.
The Netherlands is the eighth country to win the European title in this category in ten years of history. Only Germany and Hungary won this category twice over time.

Franssen is the eighth judoka from the Netherlands to win the European U23 title. Franssen is the fourth judoka of her nation to win the triple. Linda Bolder, Esther Stam and Margot Wetzer all claimed the three possible titles. None of them won the senior European title so far. It’s up to Franssen to finish the serie. This is the reason for this U23 European Championships as it is so tough to adjust to the senior level.