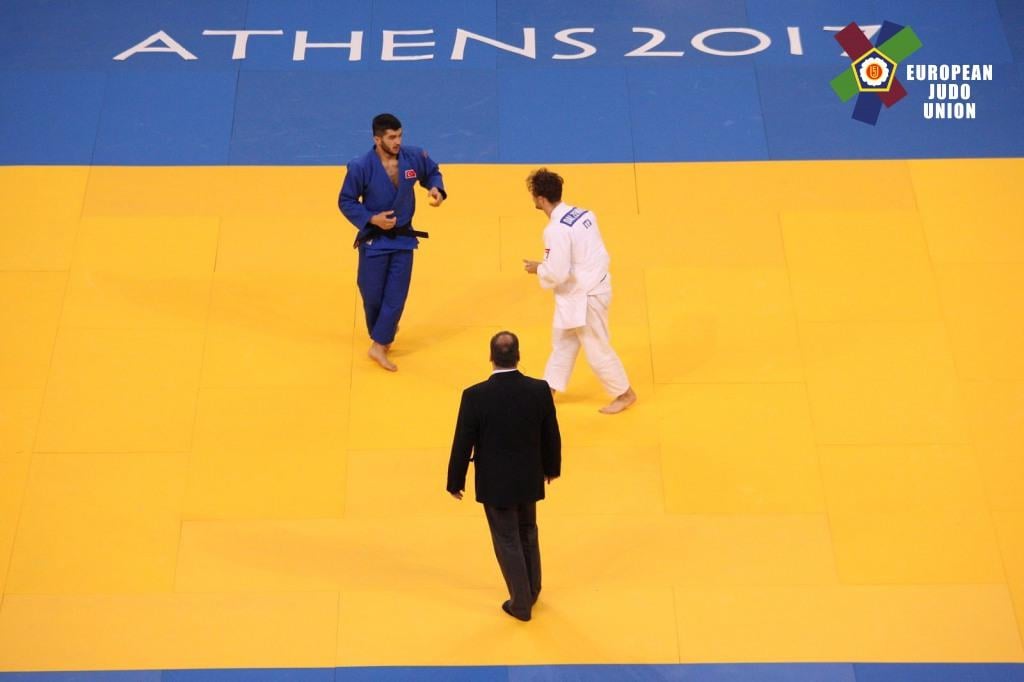 The final of the premiere of the Junior European Judo Cup Athens 2017 was marked by the playing – for the first time- of the  National Anthem of Turkey  at the -44kg women category medal ceremony. Indeed, the superiority and ascendancy of athletes from the neighboring country was such that Turkey’s national anthem was played in seven out of the eight ceremonies of the first date of the 9th Iliadis Cup.  It is worth mentioning that only 6 countries had a presence in today’s 7 finals (-44kg category was played as ”Round Robin”) and Turkey was present in all with one or even two athletes.

The first place “secured” from day one

Turkey did secure its first place to the 9th Iliadis Cup even from the first day of the tournament. More specifically Turkish athletes won 7 gold medals, 4 silver and 4 bronze medals while it also had presence in the fourth and fifth places.

“We are very satisfied with the performance of our athletes, both men and women, and results prove that. Winning medals in all categories shows that we do a great job and the secret is nothing more than hard work and training. Our country also offers us favourable preparation conditions which enables us to have a strong presence in world judo. Our aim is to hit the top in all categories by the end of the tournament. We are glad to participate in this important event under the name of Ilias Iliadis, an athlete that not only we as coaches but our athletes as well admire” .

Three years after the 7th place in the European Cadet Championships U18, that was also held in Ano Liosia, Asimina THEODORAKIS won the first place in the -57kg category. Four successful games led Theodorakis, the athlete that competed under her recently adopted Austrian flag in U23, to the gold medal. The highlight however was her victory over Meltem DINDAR from Turkey in Golden Score. Theodorakis managed to break even at the last second of the 4 minute mark, while it took her 2 minutes and 22 seconds for one more waza-ari, that led her to the gold medal and a high score in the European classification of the EJU.

“I am deeply moved and I am all in tears because I never imagined that I could reach that high in this tournament. It was a heartrending final and I constantly had in mind that I had to win, something that did happen since I was the one that wanted it the most. Whenever I compete in Greece I feel Greek but I am always moved when I hear the Austrian national anthem. This game was therefore very special for me. I am happy that this tournament  is dedicated to Ilias Iliadis who I have been admiring  throughout all these years”, mentioned Asimina Theodorakis.

“I am very proud and happy for my athlete that proved a fighted and won such a difficult final. She has a strong mind and one could say that despite having a Greek heart she has an Austrian mindset and culture. I am glad because she tries hard and from being seventh in the European Cadet Championships U18 she managed to win the gold medal.”