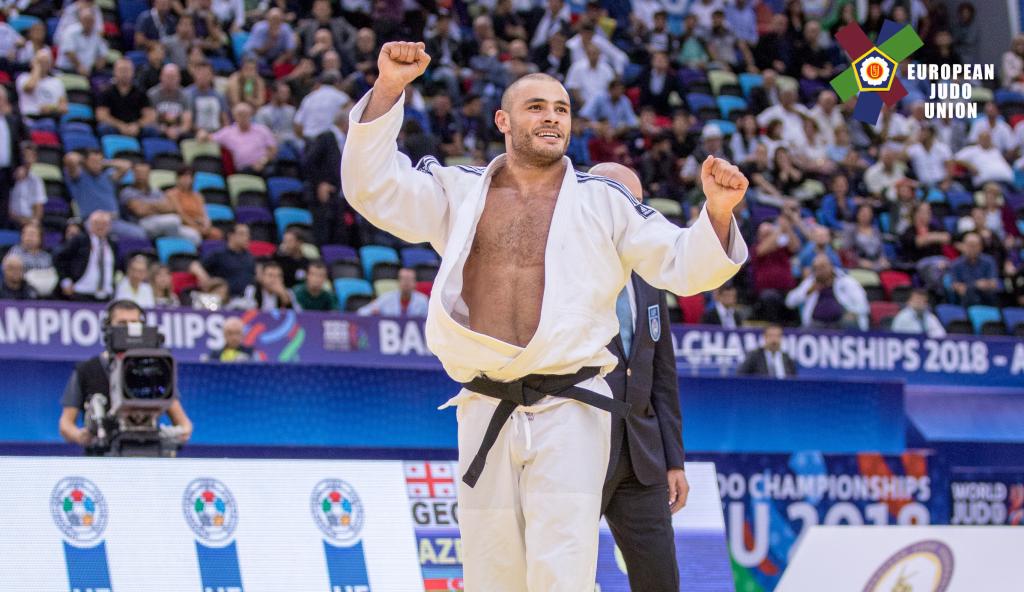 With Teddy RINER (FRA) out of the picture, the opportunity to take the World title in the +100kg category was open to all of the athletes. There were, however, some big names from Europe that were favourites to win. Guram TUSHISHVILI (GEO) and Lukas KRPALEK (CZE) are both successful athletes, the latter already a World and Olympic Champion in the -100kg category, however, he is now taking his chances in the open weight class.

TUSHISHVILI had a tough World Championships experience last year in Budapest, coming in to contact with RINER in the semi final. RINER has since told us that he appreciated being able to fight someone who was so athletic and fast and posed a challenge for him. It truly was a challenge, the Georgian coming extremely close to scoring against the Frenchman, the closest anyone has come in a long time. An unlucky bronze fight was also lost to NAIDAN Tuvshinbaya (MGL), forcing TUSHISHVILI to settle for a fifth place.

This year in Baku, Azerbaijan, the Georgian athlete changed his ending and took not only his first World medal, but the World Champion title.

“I am very happy and this is a very joyful feeling. It is very honourable. Of course I am very happy that I have won the title after Teddy. That is really a big thing for me and it will be the most difficult thing to maintain the title.”

Since then he come back stronger and wowed the crowd in the preliminary rounds here in Baku. His first contest against the towering Romanian competitor, Daniel NATEA. TUSHISHVILI benefits from being the more athletic opponent in the majority of his contests, especially against NATEA, attacking with fast ashi waza, scoring first with a waza ari and later in the contest, going under NATEA’s arm, grabbing the belt and putting in a tremendous o soto gari to score ippon. The second contest against Yakiv KHAMMO (UKR) was over in similar time to the first, scoring with seoi nage attack and finishing with a blinding sasai technique.

The quarter final against the strong Roy MEYER (NED) went in to golden score, three and a half minutes to be exact. It was a frustrating contest for the Georgian, he was awarded – and then stripped of – waza ari scores twice. Eventually taking the win with a seoi nage, TUSHISHVILI was confident heading the semi final against ULZIIBAYAR Duurenbayar (MGL), the last time they fought was in the Paris Grand Slam, where the Mongolian came out on top.

The Georgian athlete was prepared for him this time and was overcome with happiness when he executed a deep seoi nage, realising he was in to the final against Azerbaijan’s Ushangi KOKAURI. They were matched on strength, making it difficult for both athletes, but in the end only one can win. TUSHISHVILI, the smaller of the two, ended the fight with a dynamic seoi nage, scoring ippon with only four seconds left on the clock. The arena erupted.

“It was very hard, every contest today was hard. The final was the most difficult fight because I met my compatriot and friend, I know him very well and psychologically it is very difficult. But I did overcome this barrier and become the World Champion.”

Ushangi KOKAURI, became the only athlete on the Azerbaijan team to make it to the final. This came somewhat as a surprise, the unseeded athlete ranked #36 in the world. The beauty of judo is that on any given day, anyone can win, as he proved to the world on the final day of the individual competition.

KOKAURI’s initial contest was against Uladzislau TSIARPITSKI (BLR), scoring ippon by ouchi gari with ease. The third round contest with Polish athlete Maciej SARNACKI, half way through the contest, the Azeri attacked with harai tsurikomi ashi, an indisputable ippon.

It had been a relatively simple day for the tall athlete, controlling his fights and taking each exchange one at a time, until the quarter final. In his pool he came up against the World and Olympic Champion in the -100kg category, Lukas KRPALEK (CZE). Though it was a hard fought match, he was confident going in to it,

“during the international camps I met him several times and most of the meetings I beat him, so I expected also at this tournament to beat him and I did it.”

The home crowd were rallied behind their athlete as he stepped on for the semi final against Bekmirod OLTIBOEV (UZB), the fight lasted no longer than thirty seconds as he hooked in for a o uchi gari and scored ippon, his theme of the day! The Azeri had an incredible tournament and exceeded expectations, bringing pride to his home nation. When we asked about his final against the eventual World Champion he told us,

“I met him three times before, I was ready with this contest, I knew his style, everything, to be honest I was quite ready but not this time, next time will be much better but I am very satisfied with this result.”