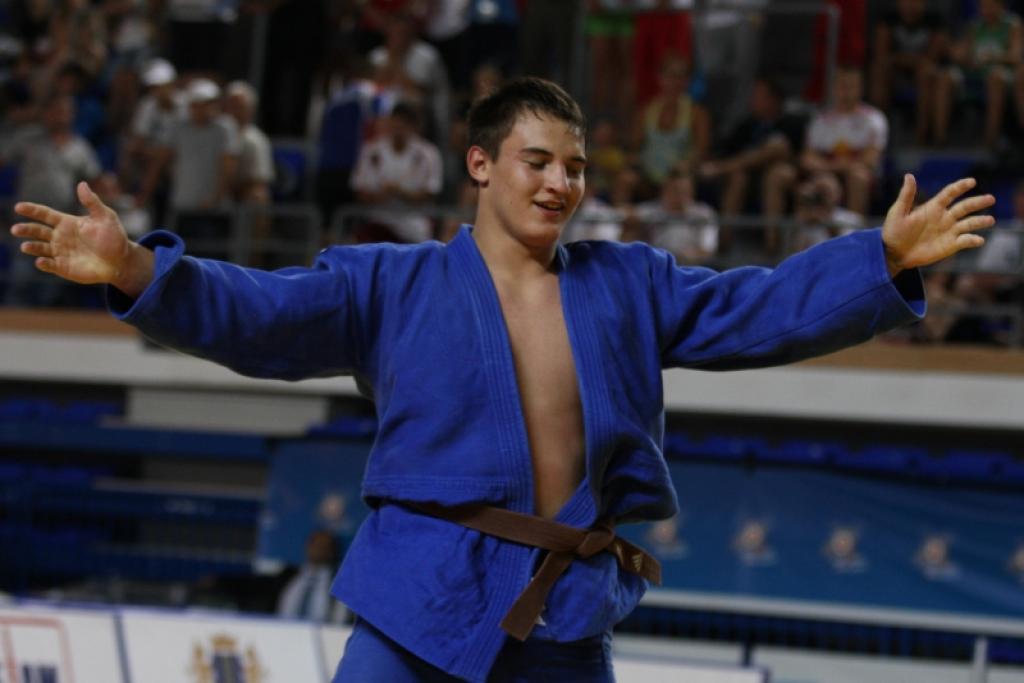 The ocean of noise in the Topolica Sports Hall in Bar, Montenegro was overwhelming all three days of the European Cadet Championships. At the well organised Green Hill European Cadet Championships, Russia was the overall winner in the medal tally.
At the third and last day Russia won two gold medals in the men’s division which was the decision maker in the medal tally, in total three gold medals this week. Last year in Malta Russia won five gold medals; four men. A distribution among twelve winning nations is great for the level of this championships where usually the more physical strong judoka have an advance. Twelve nations is a new record for the European Cadets ever. 23 Nations won a medal this week.

Men’s U81kg
In the men’s U81kg Russian fighter Mikhail Igolnikov finished his final with a devastating Ippon against Austrian Marko Bubanja. Of 30 participants Igolnikov made a good impression again, but his title was also expected. Tough to deal with the pressure as reigning World Champion. This year he fought successfully at the European Cup in Antalya to warm up for this championship in Bar. He was victorious at all his four fights and didn’t need too much time. In his second fight he needed 10 seconds, in the final just half a minute. But Bubanja was satisfied with his excellent performance against the strongest in Europe. The Austrian won four matches to come into the final and defeated Sandro Makatsaria in the semi final. The German, born in Georgia and living in Germany for four years won bronze and joined Martin Matijass on the stage. His compatriot claimed the fifth medal for Germany this event.

Men’s U90kg
Russia also won a second gold medal in the men’s U90kg division. Karen Palian won his final match against Georgian David Ramazashvili. An exhausting match where Palian made the difference after two minutes by Ippon. Palian was in a good shape winning two European Cups previously in May in Berlin and Bielska Biala.
Rokas Nenartavicius won the first medal for Lithuania, a bronze medal after defeating his fifth opponent of the day. Shota Vaniev won the second medal for Russia in this category winning bronze.

women’s U70kg
In the first of two female finals Brigita Matic won the expected European medal. Last year in Cottanera she won bronze but she learned from that small mistake in the semi final and today she was more cautious in the final. “I was actually a bit scared in the final. I had never fought her before so I took care not to be too greedy” Matic said. Matic follows her sister Barbara who was European U17 Champ two years ago and just made her debut in the seniors. Matic didn’t even think about enjoying this weekend’s success, she was still busy with her next event and works towards the European U20 Championships in Porec, in her own country Croatia.

In the today’s final she wasn’t as dominant as in the semi final against Dutch Chantal Walhout. Against Ekaterina Tokareva she fought a more tactical match and benefit of the pressure she created resulting in a penalty for Tokareva.

Bronze was for Marie-Eve Gahie of France and Sara Tintor who won the second medal for Serbia at this event.

women’s +70kg
The final in the heavyweight category between Polish Kamila Pasternak and Vaselyna Kyrychenko (UKR) resulted in the first ever European title for Poland for a young woman. Poland celebrated a few titles in the far past and the title in 2010 of Marcin Gmurek.

Today Pasternak won in an exciting final against the much heavier Kyrychenko after a penalty for Kyrychenko in the last minute. Although Pasternak wasn’t able to catch the Ukrainian with a technique she fought in a tactical way to the victory. Poland needed a success and got it.
The bronze medal was for Emese Karpati of Hungary, the fourth of this championship. Third place as well for Paula Kulaga of Poland adding to the success of the Polish team at the last day.

Men’s +90kg
What a final U90kg when Fedir Panko was creator of a great surprise when he took the gold for the Ukrain. The first gold this week after three losses. Ofcourse he felt the pressure to win that last chance for a European title. Roman Paskar was the last young man to win the title for his country, in between four European titles for cadet women. Panko defeated strong Ruslan Shakhbazov who led the final by waza-ari but couldn’t hold it when Panko came back in the match with the same result however proceeding ne-waza and collected the title with 20 seconds oseikomi while his 28 teammates shouted him for the last countdown of the day.

Messie Katanga of France won a bronze medal. He lost his semi final against Fedir Panko in a thrilling match. Katanga defeated Harun Sadikovic of Bosnia Herzegovina, although the country can be proud on the progression made.

Alexandr Begmetov won a bronze medal for Russia and added to the counter of 11 medals in total. He won his last fight controlling Attila Fabian (HUN) by oseikomi.
Typical for this championship was the tremendous support of all teammembers and family of the athletes, creating an unbelievable noise in the new hall in Bar.

The level is increasing and this championship gives all of us and the winners good hope for future success.

Join the success and watch the photos of this event in our Media Gallery:

Watch some additional reports in our You Tube Channel: