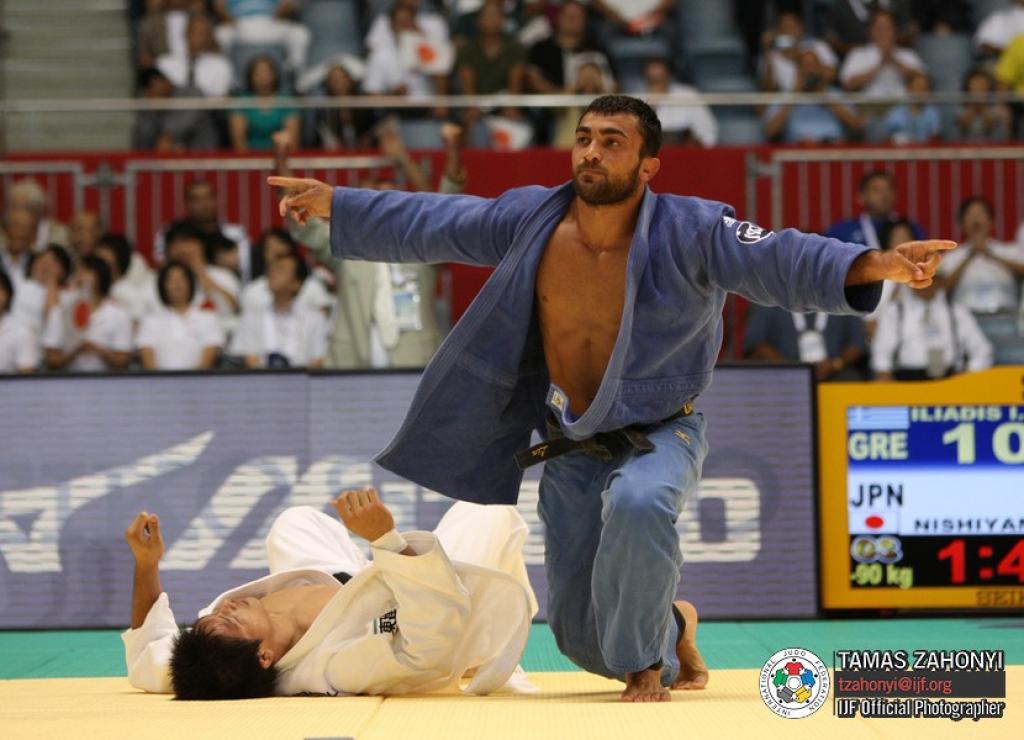 Two European World Champions today at the second day of the World’s in Tokyo. Lucie Decosse (FRA) and Ilias Iliadis won the world title and Kim Jae-Bum took the first title today in the U81kg division.

Korean Kim Jae-Bum defeated Leandro Guilheiro of Brazil in an equal final that finished in the golden score by a beautiful o-soto gari
Guilheiro was close to the victory in the last minute but it was not worth a score. Guilheiro this year won the Tournoi de Paris in February and the World Cup in Sao Paolo in May. Kim won everything where he competed this year but maybe not the best seeded events. But there’s no doubt about his skills as he finished the golden score with full control and a great point.

Cho in –Chul was the last world champion for Korea in this category in 2001 in Munich. Kim won the bronze last year in Rotterdam. Guilheiro wanted to follow up Camilo Tiago (BRA) who won the world title in Rio in 2007, but is now the successor of Aurelio Miguel who was the last to lose a world final in both 1993 and 1997.
Kim had beaten Guilheiro once more in 2009 at the Tokyo Grand Slam.

In an interesting match with two different styles Euan Burton (GBR) took the bronze defeating 35-year old Flavio Canto (BRA).
Kim is strong the whole year winning titles in Suwon, Düsseldorf, Prague and Ulaanbaatar.
Today he won four matches reaching the semi final. In the semi he overcame Masahiro Takamatsu (JPN), where two Brazilians had to fight for the final: Flavio Canto and Leandro Guilheiro. The last one reached the final defeating not only Canto but as well Japanese homeplayer Takahiro Nakai, former world medalist Francesco Bruyere (ITA) and 2010 European Champion Sirazhudin Magomedov (RUS).
Masahiro Takamatsu won the bronze in a great match against Elnur Mammadli. Mammadli, the 2008 Olympic Champion U73kg defeated favourite Ivan Nifontov in his third match.
Takamatsu surprised with this performance as he lost this year to Guilheiro and Magomedov who were more favoured.

women’s U70kg
The undisputed favourite for the world title Lucie Decosse has won the world title in Tokyo. It’s her second world title after winning the U63kg in Cairo in 2005 and finished with silver in 2007. Today she defeated Anett Meszaros who prolonged her status as silver medalist. Last year Meszaros lost to Yuri Alvear in the final, this time 29-year old Decosse was more convincing.
After almost four minutes Meszaros injured her shoulder and was too weak to defend against Decosse. 23-year old Meszaros was again stronger than last year and is still improving but was unfortunately injured to her shoulder that seemed almost dislocated and ankle and gave up after Decossse jumped on her for a hold down.

Rasa Sraka won the bronze U70kg in the golden score. Sraka lost the quarter final to Decosse, but via the repechage she made it to the medal stage.
She defeated Edith Bosch (NED) by a take over, the most doubtful decision of the day. The last victory of Sraka in 2003 at the European Championships in Düsseldorf was a disqualification for Bosch, so the match already had a history.
Former World Champ Bosch however didn’t win a medal since her world title in 2005 and bronze in Osaka in 2003. Last year in her own country she lost to world champ Yuri Alvear (COL). Sraka defeated Bosch and wins her second medal at a World Championship after finishing third in 2005 when Bosch took the title, she took sweet revenge.

Home favourite Yuriko Kunihara won the second bronze medal against Cecilia Blanco of Spain. Kunihara won her first World medal. Blanco finished four times in the top 9, but never won a medal. Last year Mina Watanabe won the bronze for Japan. Masae Ueno was the last Japanese to dominate this category in 2003 and 2001.

In the U90kg division it was Ilias Iliadis who won his first World title. Iliadis had lost the world final twice in 2005 and 2007, so knew what to do. Against Daiki Nishiyama however he didn’t show his best fight of the day. In an exciting final it was Nishiyama who took the initiative and looked stronger in the last minute but the match turned out in a golden score. But in the golden score Iliadis got more grip on Nishiyama and throwed him in a great ippon after one minute in the last minute. Knowing that he had lost the final twice he didn’t want to lose for a third time. Only Klaus Glahn from West-Germany lost a men’s final three times so Iliadis prevented himself from joining that doubtful list.

The 2004 Olympic Champion U81kg was again able to top his best performance of this year when he won bronze at the Europeans in Vienna and now has both the world title as Olympic title after all.
Nishiyama wanted to become the successor of Hiroshi Izumi who won the world title in 2005 and Hidehiko Yoshida in 1999. But at least performed better than Takashi Ono who finished ninth this year and last year.

Iliadis: “it’s fantastic, unbelievable, I can’t even speak and my heart is beating,” explained the Greek hero.
“The past years, I was really badly injured with my knee and with my hand. But today, it is like everything is gone. I feel good, I have no pain. That’s great! My judo is based only on the attack, I don’t really care about who is in front of me. I just keep pushing and pushing until my opponents makes a mistake. Nishiyama is very young and strong, but I just felt so good today” added Iliadis

This U90kg category was the most surprising category where many favoured judoka didn’t make it to the final stage. The undisputed favourite was Takashi Ono (JPN) but he lost to Ilias Iliadis in his third bout, and didn’t get a chance for the repechage.

“Takashi Ono is the best judoka in the men’s U90kg. No doubt, but today was not his day. I feel sorry for him but so happy for me. I respect Japanese Judo. It is so nice, but that is the beauty of our sport; today was my day and I did it,” concluded the world champion.

Nishiyama had quite an easy pool after all as World Champion Lee had lost his first bout, but defeated Varlam Liparteliani in the semi final. Liparteliani helped his former countryman Iliadis in his warm up for the final.