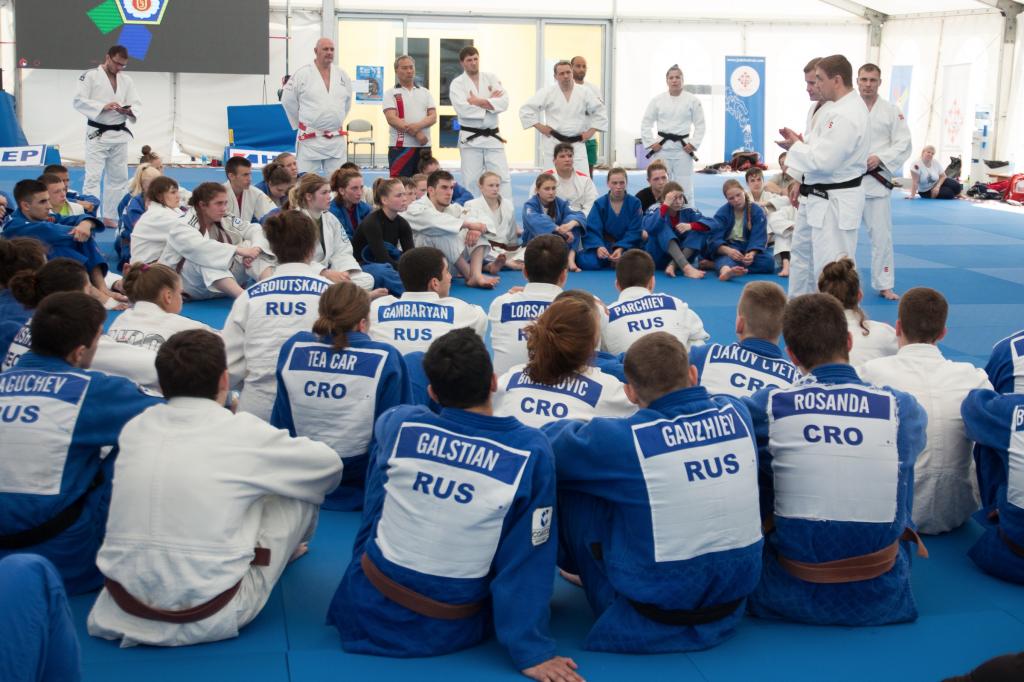 For the first ever time in the history of Judo Festival, the U16 Training Camp was combined with the Olympic Training Camp which meant once the youngsters finished with their training, they were allowed to join in with the elites. Some chose to join in and some left the challenge for another day.

Over 150 youngsters from 12 different countries conquered the tent of talents twice a day in Porec (Croatia) during the 2017 Judo Festival. For most of the youths the main focus now is the upcoming Cadet European Championships and European Youth Olympic Festival.

Whilst all the European tournament is coming up for the majority of the young ones, there was someone who also prepares for a big tournament, yet, it will be overseas. Cadet African Champion of 2017 in the -57kg, Marlii Meiring, came all the way from South Africa (RSA) to prepare for the Youth Commonwealth Games, which will take place at the Bahamas next month. The 15-year-old judoka expressed her thoughts in regards to the training camp;

“We actually found out about the Judo Festival and the OTC via Facebook, and I am glad we did. This is a very good training camp, I enjoyed it a lot. There are loads of opponents and loads of randori too which, for me, is really great because I don’t have much people to practice with back home. I fall a lot but is okay, that is how I learn.”

The local troops arrived to the camp with former Tsukuba University judoka, Shun Kondo. The former Japanese student arrived to Croatia last year and have been making significant impact on the team performance since his arrival as a support coach.

“I came to Croatia to coach and I really like it here, the people are very nice. Judo in Europe is very different to Judo in Japan. It is more playful here with different approach to grip, to move and to throw for example; and for me it is really interesting. I am working with the young group, Cadet and Juniors, and I am mainly focusing on making them understand that nothing will work for the first time and that they have to be patient and we always correct the mistakes and when it is corrected, the important is to practice, practice and more practice. It is a great camp here in Porec, especially because it is not only randori but also the young ones can learn different techniques and skills from a World Champion which I think is really great.”

“For me, with children at such age, it is each and every time about learning. At this age, they have to learn day by day, we can’t think about important competitions at this stage. It is very important to implement the fundamental parts such as grips, movements, nage komi and so on. If we start think about results at this age, it is not progressive thinking. At each training we have to give them something new and that is what I have been focusing on in this camp as well. Of course, it will not suit everybody in the dojo, but for sure everyone can take home at least one thing which suits their style of judo.”