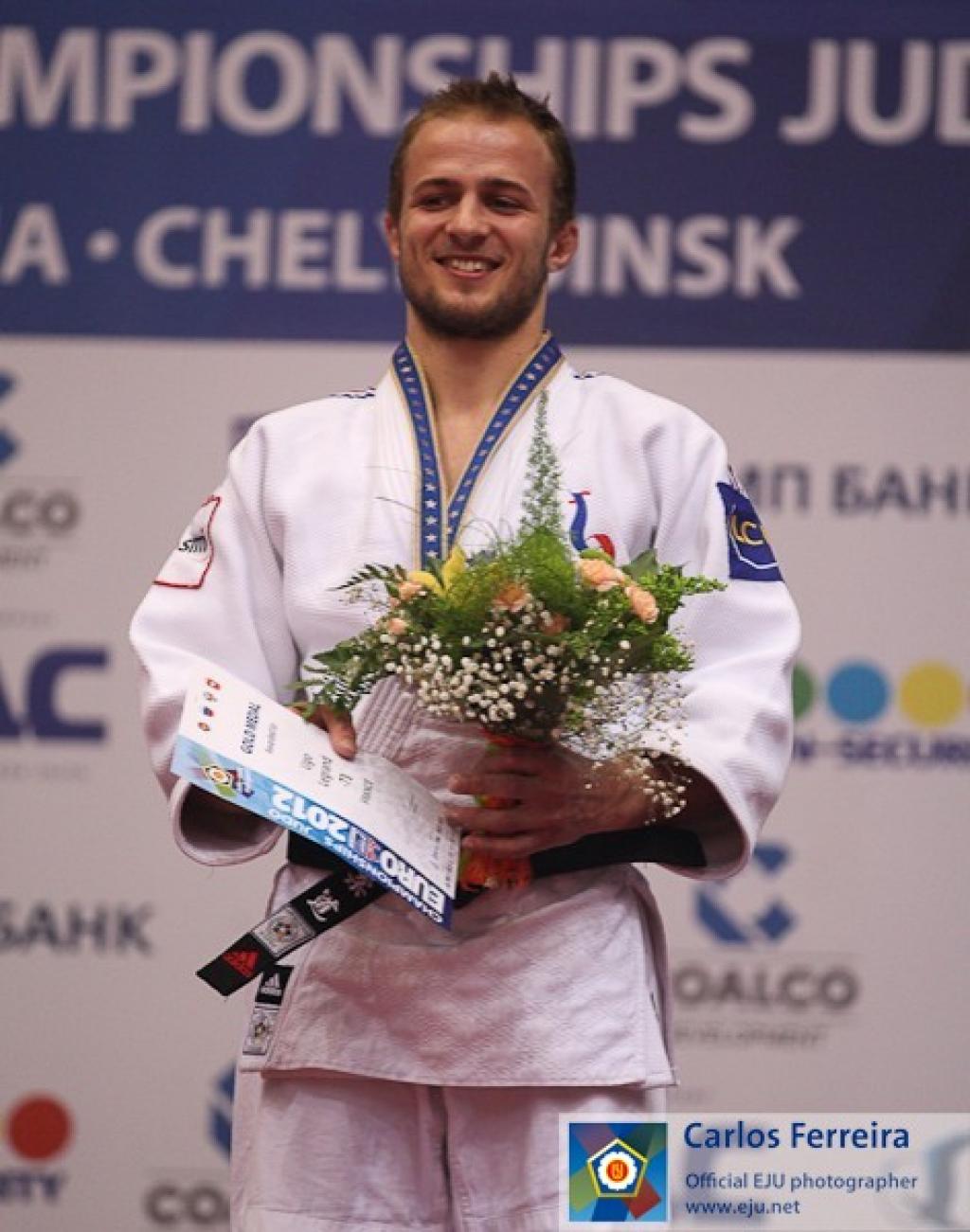 The Olympian of France Olympic team for London, Ugo Legrand won his first European title. 23-year old former World Junior Champion and current bronze at the last World Championships today in the final category U73 was dominant over Ukrainian Volodymyr Soroka. Three penalties against Soroka was more than enough to take the gold medal.

Legrand’s European title was spectacular for France. The last Frenchman who won a European title in this category was Richard Mellilo in 1983, 19 years ago U71kg. Since then France was not able to win the title despite six finals, all lost by six different judoka.

Legrand today was also better than Marcel Ott of Austria and won his second fight against the bronze medallist of last European Champinoships in Istanbul Hasan Vanlioglu (TUR). German Igor Wandtke who had a good day was a tough opponent. In the semi-final Legrand won his fight against Italian Giovanni Di Cristo.

Legrand said that he was very happy with his title and that this is like dream that came true, since he was little kid he was training for this and today it happened to him!

Legrand said after the event: “I’m not going to celebrate too much even though I’m very happy. I will use tomorrow to relax as we are competing on sunday at the Team Championships.

His opponent Soroka said: “It has been a hard day. All my fights were tough and I am exhausted. In the final maybe I ran out of energy but I am not so happy with the referees. My opponent wasn’t penalised for his moves. I wasn’t thrown, so I can’t really say I lost this final. But it was another test for the Olympic Games and it proved that I am on the right track.“

Iosef Palelashvili from Israel won a bronze medal today and the third of Israel. In the last match for a bronze medal he was better than Giovanni Di Cristo (ITA). “I had a lot of hard matches today” Palelashvili said. “I needed to win a medal in order to qualify for the Olympic games, therefore I am very pleased. For me it was a great motivation to see our both girls winning medals. It made me stronger mentally.“

World Championships runner-up Dex Elmont won his second European Championships medal with today’s bronze. Although he lost to Di Cristo he was able to fight back in the repechage. He defeated Igor Wandtke and in his final fight he met with a well known Polish fighter Tomasz Adamiec. They know eachother well and fought eachother several times U66kg. Most of the times Adamiec was better in that time but since both judoka made it to the U73g class Elmont beat him three times including today.
“In the quarterfinal my focus was off and I didn’t have any luck against Di Cristo. It was hard to motivate myself for the bronze medal match. I hate bronze medal matches, but it is better than nothing. I didn’t want to finish fifth or seventh. So if I don’t get the gold or silver at least I got the bronze. Now I have a lot of experience. I still have to work hard this summer to get little mistakes out of my system” Elmont said.

Both Legrand and Elmont and mingling with the best in the world now. The competition comes from the East with Japanese guys like Riki Nakaya (or Hiroyuki Akimoto), Wang Ki-Chun from Korea and Sainjargal of Mongolia, a lot of work has to be done for the big day at 30 July.