Ukraine does the impossible, sensation in Istanbul 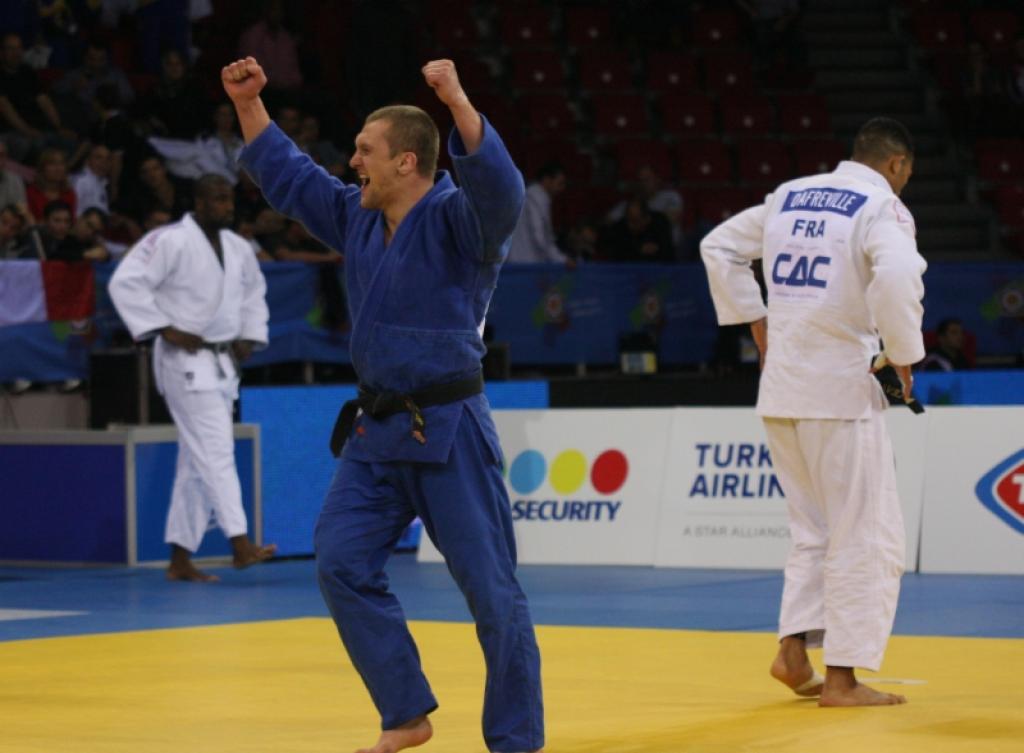 What a great finals today in the European team championships.
The first match of the European team final between the Ukraine and France was a good start of the team of France. David Larose defeated Sergiy Drebot in the U66kg category by yuko and gave the French the lead. France is last year’s runner up and they were eager to win the title this time. France didn’t win the title anymore since 2004. But Drebot gave Larose resistance until the last second. The Ukraine debuted in the final of a team event since the start in 1951 in France.
Meanwhile France had won the title 17 times. The Ukrainian team had a tough semi-final match against the Georgian team, last year’s European Champion and were the sensation in the men’s category.

The second bout between Volodymyr Soroka (UKR) and Benjamin Darbelet (FRA) was decided in the last minute when Soroka made the equalizer with a straight ippon.
Both judoka have become individual European Champion once but never won the team title. Soroka’s win have the Ukraine hope again and good spirit to the forthcoming fighters.
Two young judoka fought an exciting match, much better than the two previous bouts. Both with an offensive style Artem Vasylenko (UKR) and Loic Pietri scored points in the first minute. Vasylenko took the lead by waza-ari against the U20 World Champion of 2009. Pietri had a great week with silver in the individual event U81kg and fought back in his battle against Vasylenko and scored yuko and wazari as well after two minutes of fighting.
21-year old Vasylenko was second at the World junior Championships in 2008. 20-Year old Pietri has a faster career at senior level but both judoka offered the spectators a spectacular match but couldn’t score in the remaining three minutes.
In the golden score Artem Vasylenko gave the ultimate chance for the Ukraine to capture the first ever European title. He threw Europe’s number two for ippon.

Good old Roman Gontyuk was the fourth fighter for the Ukraine. He is very experienced and won bronze at the 2005 world championships and silver at the Athens Olympic Games and bronze in Beijing in 2008. Although he may have had his best time, a team event extracts the best out of the judoka. Gontyuk is able to peak at the right times and so he did. Against Mathieu Daffreville he took the lead from the beginning and could fight a tactical match. Gontyuk however decided the match two minutes before the end by a strangle.

The team of the Ukraine won a sensational and unexpected Championship. An great performance knowing that French eyecatcher Teddy Riner’s fight didn’t matter anymore against a smiling Stanislav Bondarenko who accepted the loss two minutes before the end by an ippon of Riner. France lost its fourth final in the last six years. More importantly the Ukraine won its first ever European team title.

bronze
The German men defeated Poland for the bronze match. The Germans were better than the tired Polish team that didn’t have the position U73kg.
In the second bronze medal fight Georgia overclassed the Estonian team. Georgia defeated Estonia by 5-0.