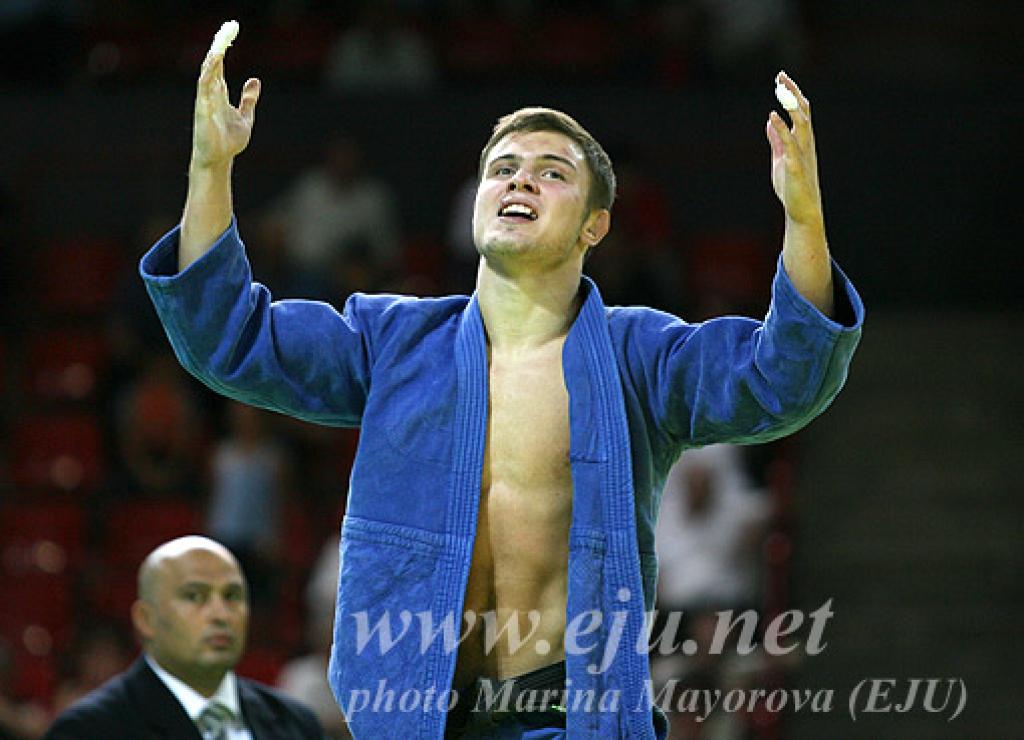 What a fantastic line-up in the U100kg final on the last day of the European U20 Championships. But Elmar Gasimov from Azerbaijan shocked all Czech fans of Lukas Krpalek (CZE), the Junior World Champion with a fantastic throw in 21 seconds.
Gasimov, the number five of the recent senior World Championships in Rotterdam upset everybody today in the sport hall Yerevan. It was the dreamfinal but it was over before everyone realized what a giants these fellows are.
Krpalek also participated in Rotterdam but lost in the first round. He wasn’t used to such backdraft as he had won everything in the juniors for the last two years. But Gasimov, coming from the U90kg category last year showed everyone today who was the best winning all fight by ippon.

In the U78kg weightclass the final was an exact copy of last year’s final in Warsaw. Audrey Tcheumeo (FRA) took the 6th medal for France and the second European title. Tcheumeo again defeated Ivanna Makukha (UKR) in the final.
Together with Abigel Joo (HUN), Tcheumeo was the only one to defend her title successfully.

In the over 78kg Iryna Kindzerska took the seventh medal for the Ukraine and second gold beating reigning European champion Sara Alvarez (ESP). She won the first medal for her country at this championship as expected, but the colour wasn’t good enough to stay in line with other countries.
The Ukraine wins the overall medal tables with four finalist, and two gold medals.

U90kg Swedish Marcus Nyman took the first male gold for his country ever. The only judoka from Sweden who took the gold previously was Sanna Askelöf in 2002. But the Swedes are coming to the top within a couple of years. Nyman is one of the outperformers in his country winning two U20 Top Junior tournaments this year but also 17-year old Emma Barkeling knocks on the door with the same type of performances as Nyman.
Today Nyman defeated Grigori Minashkin from Estonia who lost the bronze medal fight last year, just like Nyman.

The final over 100kg was a fight between Johan Mettis (EST) and Sergey Kesaev (RUS). They know eachother from the circuit for two years now, but Mettis was the better performer so far. But today Kesaev took the lead from the start and in the last minute Mettis gave away his chances to fall into an oseikomi.
Kesaev took the 5th medal for Russia and pulled up Russia to the fourth position of the medal tally. Russia had won nine European titles in the U17 European championships, twelve medals in total.

Mettis could have been the successor of well known names from Estonia like Indrek Pertelson (1991) and Alexei Budolin who won two European junior titles in 1995 and 1996. However he won the 7th medal for Estonia ever and obvious the most successful edition ever with a second silver medal today of Grigori Minashkin U90kg.