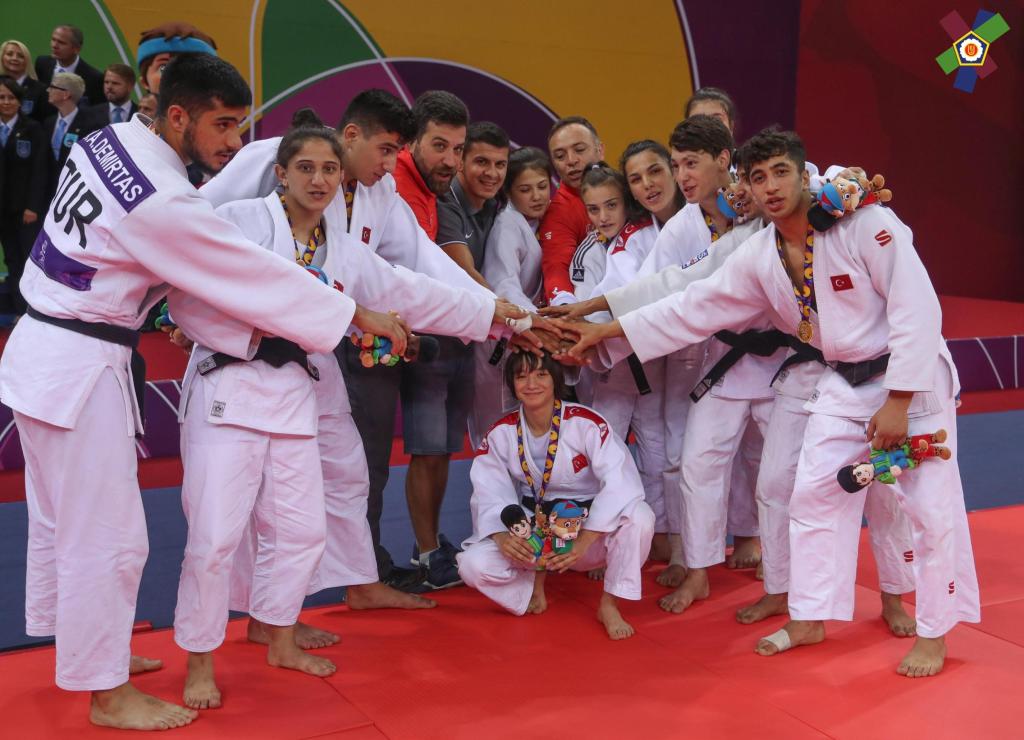 Arguably the most exciting day of the tournament, the Mixed Teams event epitomises the meaning of judo, as the athletes come together to support one another, the extended team in the stands chant for their country. The Heydar Aliyev Arena has hosted the EYOF judo for the past four days and concludes with the closing ceremony for the multi-sport event commencing this evening.

The day began with 13 teams, the first 6 to open the tournament included the home nation, Azerbaijan, along with Georgia, Italy, Slovenia, Netherlands and Poland.

Azerbaijan were unlucky in their bid against the Georgians as the match up went to 3-3, the decider was between Kote KAPANADZE (GEO) and the EYOF gold medallist, Turan BAYRAMOV (AZE). KAPANADZE had the advantage as he had come out on top in their previous contest and once again put a waza ari on the board, enough for the Georgians to take their place against the Dutch team.

The Azeri team picked themselves up, still in with a chance for a bronze medal. Heavy weight and EYOF gold medallist Huseyn MAMMODOV won his contest to make it 2-2 in the first repechage round against the Netherlands, Sabina ALIYEVA taking them 3-2 and the final hit came from BAYRAMOV, putting Azerbaijan in to their next repechage against Italy.

The Italians found themselves in a 3-3 situation but Veronica TONIOLO (ITA) took her team in to the bronze medal contest in the deciding match with a san gaku hold scoring ippon, ending the Azeri dream. Unfortunately Italy was put through their paces when they met a very strong German team. In the fight for bronze the Germans took the lead and the -48kg Jule ZIEGLER made it her mission to win the final contest to put her team on the podium, a huge success for the young squad.

Today the key to success was our team spirit. All of the athletes really wanted this medal and have been fighting for it. We had a tough draw but everybody gave their best. The biggest thing today was being a team.

In the other bronze contest, Georgia stood little chance against the Hungarian team who were simply too strong in the final round. Team Hungary surprised everyone, including themselves as they ended up winning the medal contest 4-2, Hungarian Coach, BIRO Norbert was very proud of his team today,

It was absolutely a surprise for us. I saw the draw and it looked really difficult. But finally, we beat the strong French team and also Georgia.

The team event is always special because you need a good mix between boys and girls. Of course Georgia have the stronger boys but this is not enough. In 2017 we lost against Georgia in the final when it was all boys. Today I said, it is time to take revenge.

Team Russia managed to improve on their previous result in the Cadet European Champions where they took a bronze medal once they had defeated Team Germany for a place in the final against the #1 seeds, Team Turkey. It was an assumption today that these two teams would find themselves in the final block as the individual performances were incredible, both National Olympic Committees taking gold medals and had much to give.

The girls cadet Russian coach, Igor SHKARIN was pleased with his athletes,

This is sport, that’s judo. The Turkish team was better today and they deserved the gold medal. I was hopeful before it will be 3:3 unfortunately it didn’t happen. In general I am happy with the performance and the result of my athletes. The best Russian athletes are not here in Baku because they are preparing for the World Championships.

The question now poses itself, will the athletes in the top team be able to take down Turkey?

This seems unlikely after the tremendous performance from the Turkish side today, though they had some very tough opponents, the level of judo was very high, Musa SIMSEK a stand out athlete with a very mature style, along with EYOF gold medallist Olzem YILDIZ, who missed out in the final due to the 4-0 result.

Turkey did not concede a single loss during the team event today and for this reason there is no doubt they would stand on the podium to accept their gold medals, completely undefeated.

Talking to both the Turkish teams coaches, Erdal DOGAN and Furkan OTHAN after they had finished celebrating with their athletes,

The final result (4-0) was not a surprise for us. We already won the Cadet Team Championships some weeks ago and we are here with almost the same team. The team showed a great performance today and also in the last days. So we expected this result against Russia. All athletes are Champions and we are hopeful to win also a medal at the Cadet World Championships.

Still brimming with pride and confidence, we look forward to seeing our European representatives compete in the Cadet World Championships and wish them the best of luck.

This concludes our time in Baku which has demonstrated some of the top cadet judo in Europe with the experience of an Olympic Festival for the athletes who will go on to en joy the festivities of the closing ceremony and continue to make memories. 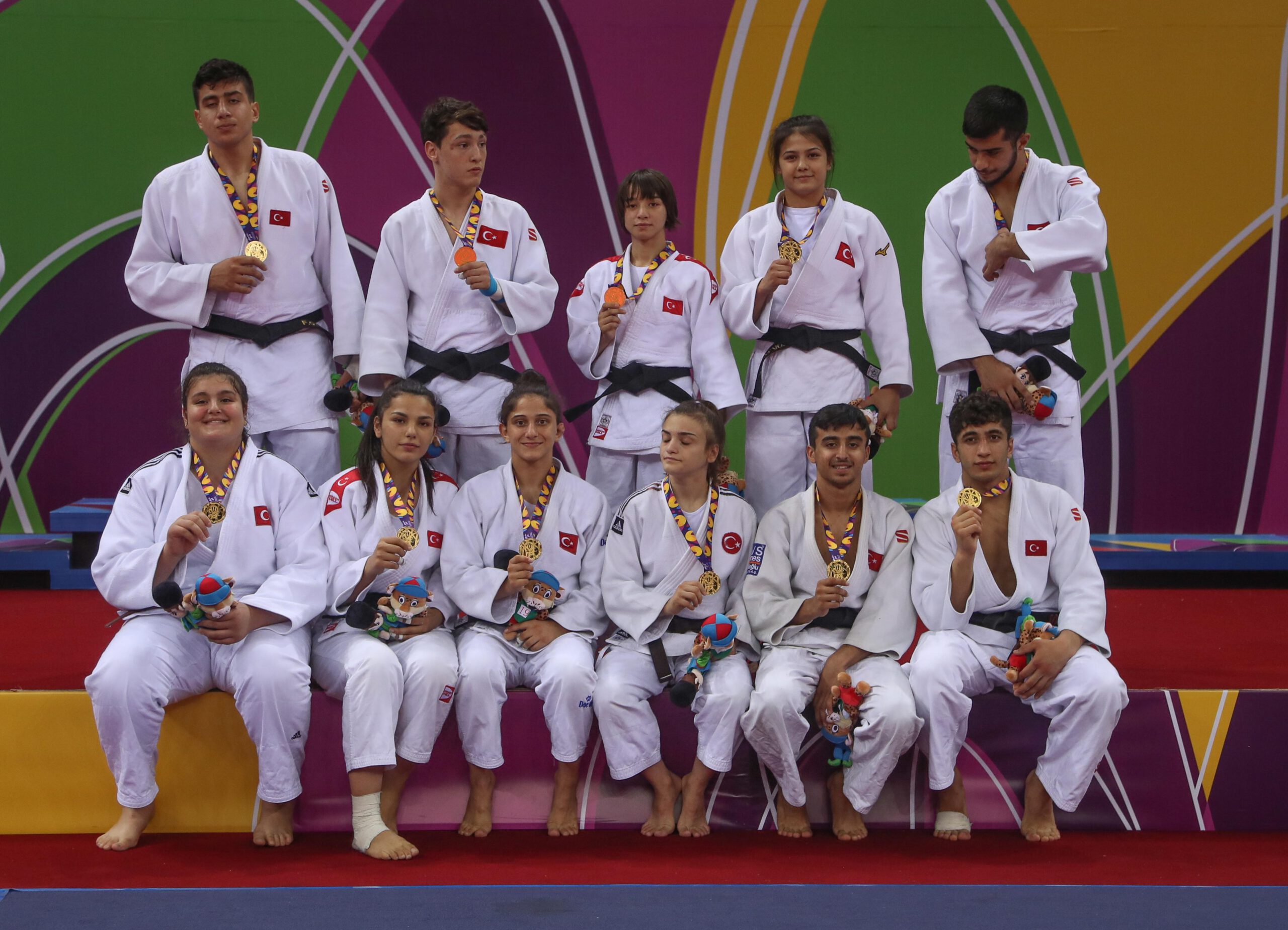 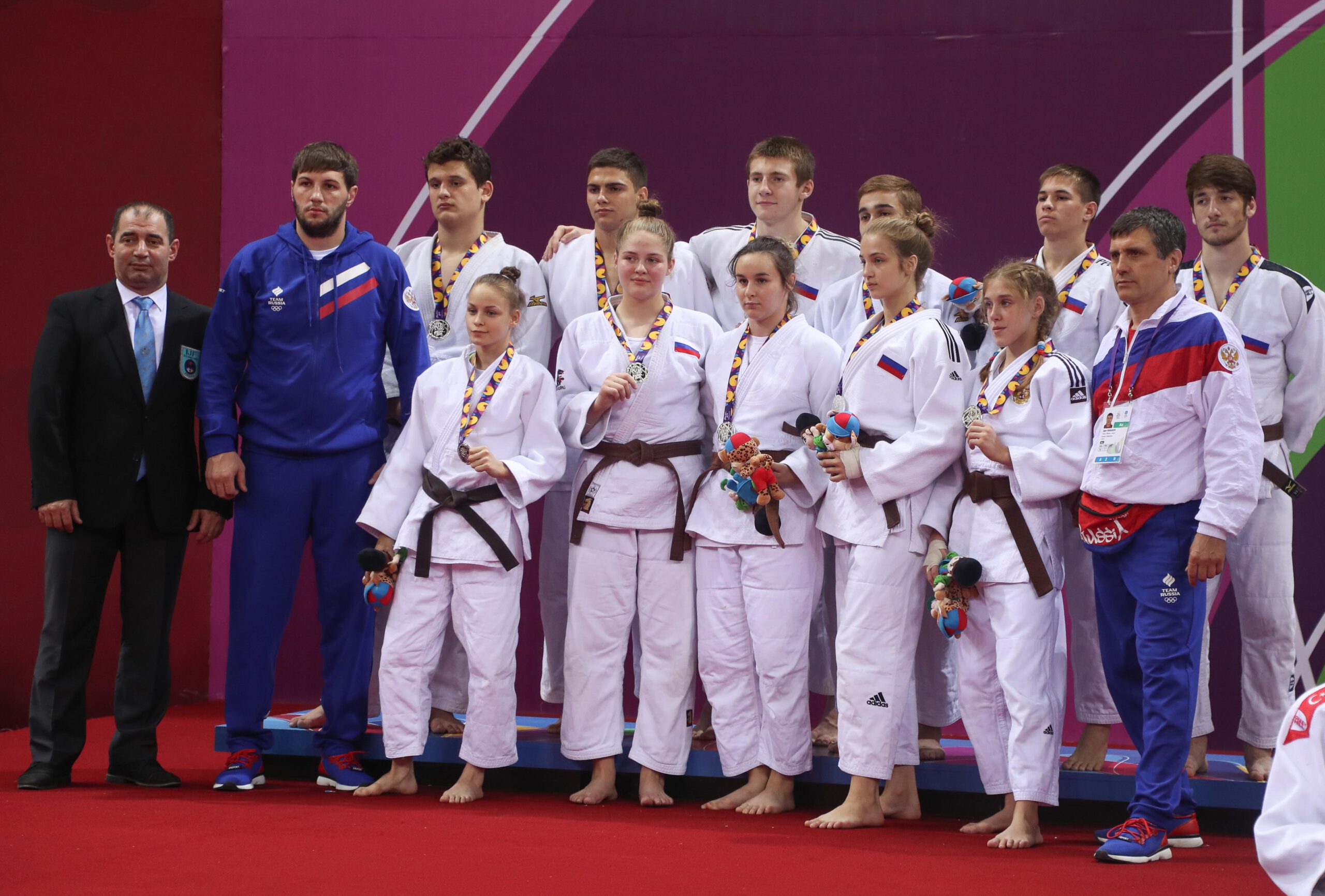 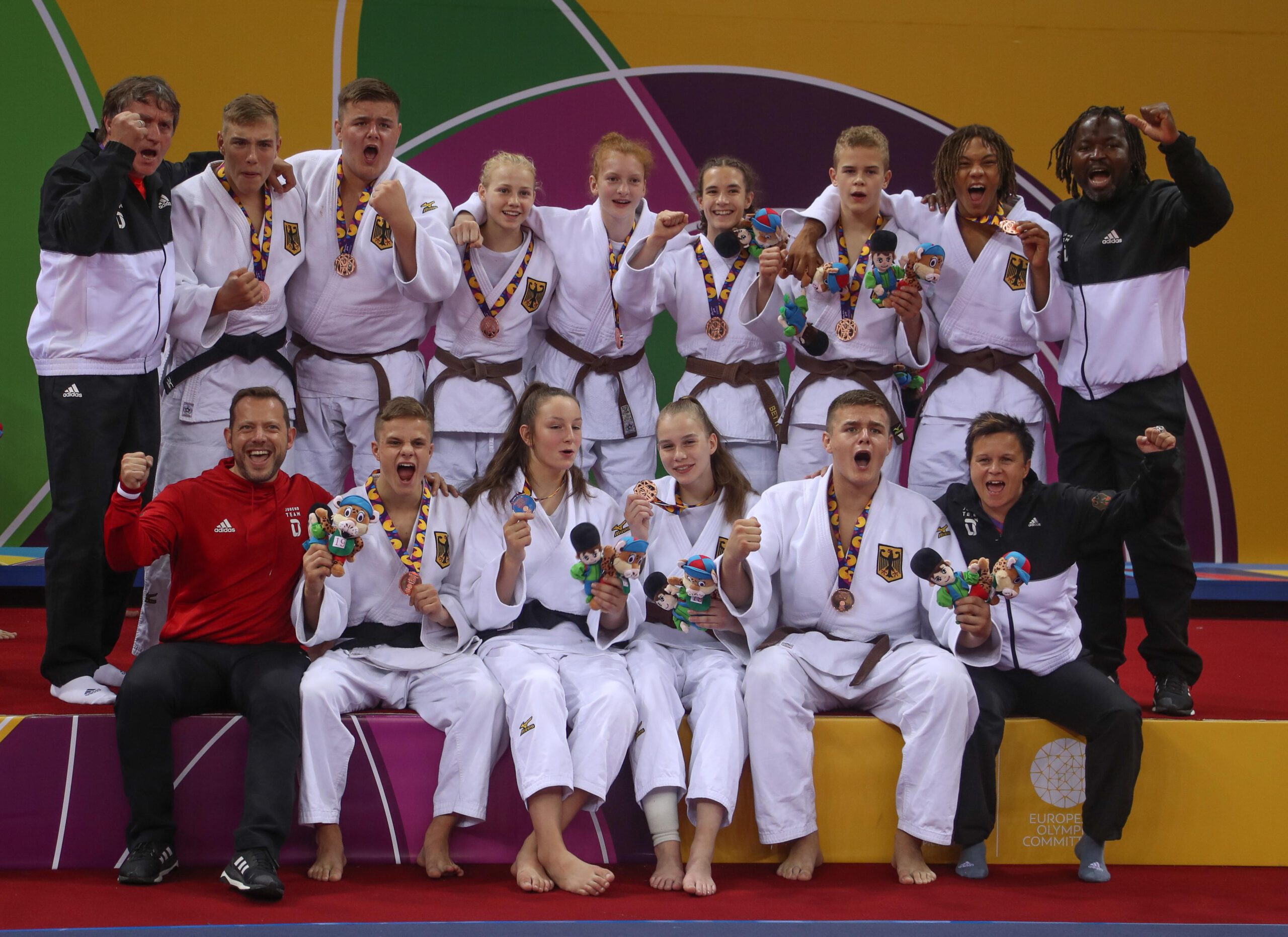 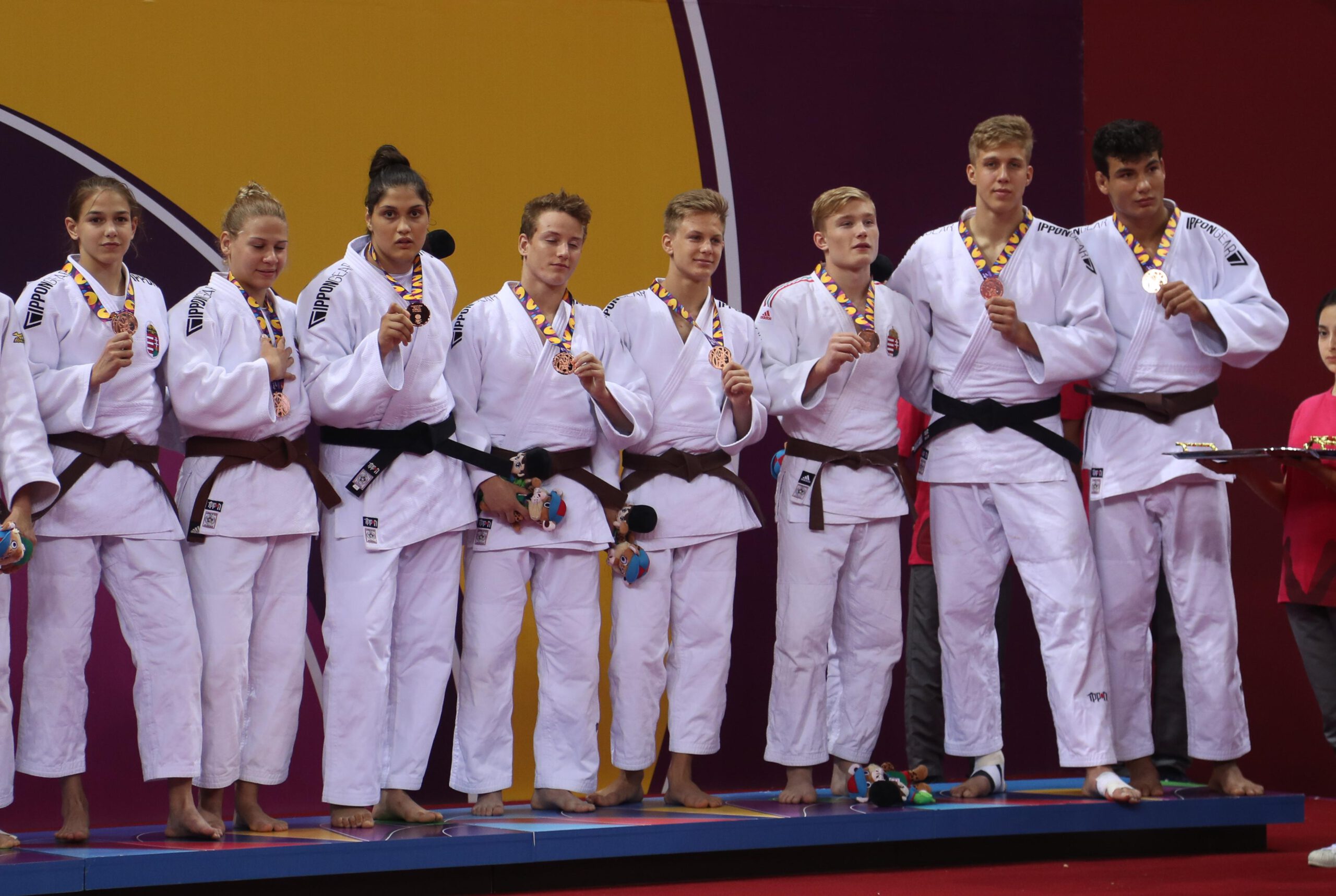