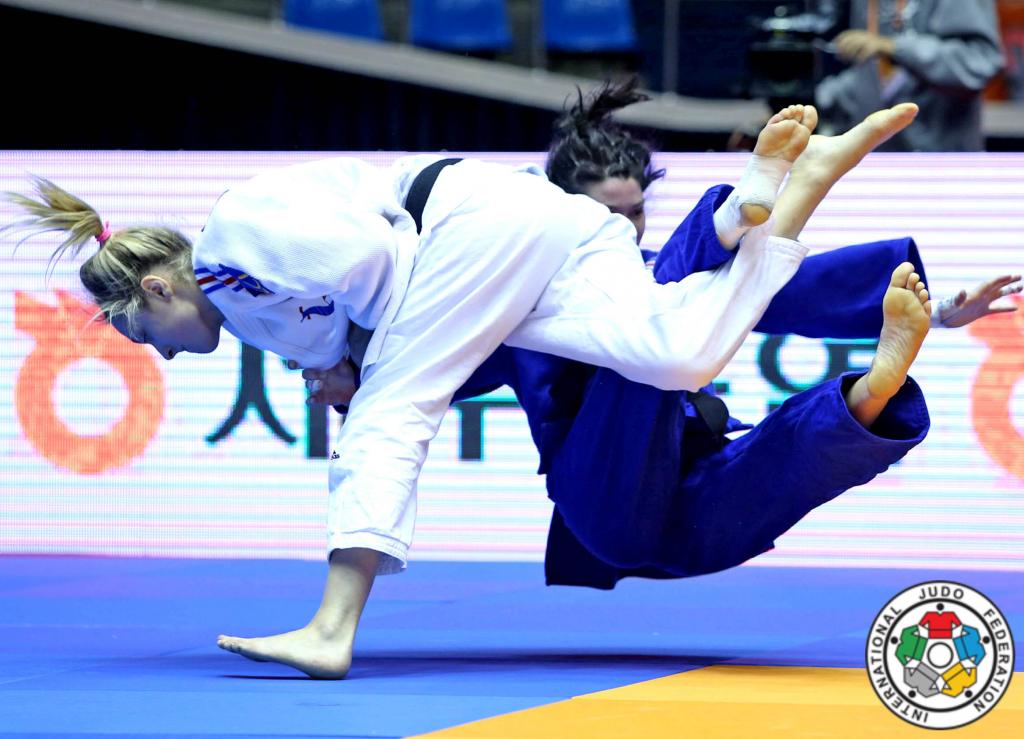 Automne Pavia FRA won the gold medal in the -57kg on the opening day of the Jeju Grand Prix in Jeju, Korea. In a dominant, strong display Pavia was hardly tested and was scored on (a yuko) only once all day, and that by team mate Helene Receveaux in the dying seconds of the final when two scores by Pavia had all but sealed the gold medal. Despite Pavia’s well-documented technical shortcomings the French fighter was still head and shoulders above the opposition field that contained several world and Olympic medallists. The world number one enjoyed a first round bye before facing Connie Ramsay GBR in round two. Scoring first yuko with tai otoshi Pavia moved quickly to finish the contest off inside a minute throwing the British fighter for ippon with harai goshi. Next up was Bulgaria’s Ivelina Ilieva whom Pavia had defeated on both their previous encounters. The superior gripping skills, tactical awareness and overall threat from Pavia was too much for Ilieva who was thrown with uchi mata by Pavia for yuko, before being given hansokumake for a fourth shido offence.

Meanwhile on the opposite half of the draw number two seed Miryam Roper GER in her quarter final was thrown for ippon by Camila Minakawa ISR pushing the German out of the final medal placings. When asked about not having to fight against world bronze medallist Miryam Roper, Pavia said “I was ready to face anyone today including Roper. But we saw today how Roper is; sometimes blasting people off the mat, other times going out tamely”. Pavia’s semi final with the other world bronze medallist from Rio last year was Flora Bedeti SLO. However the contest failed to sparkle and Pavia eased her way into the final on the back of three penalties collected by the Slovenian. In the final Pavia threw team mate 2010 junior world champion Helene Receveaux for yuko and waza ari with harai makikomi to seal a solid performance. “I won’t be competing in Tokyo but I will be there for the training camp,” said Pavia. There was a gold medal too in the -52kg category for Andrea Chitu of Romania.

For the rest of today’s results see: http://www.ippon.org/gp_kor2014.php