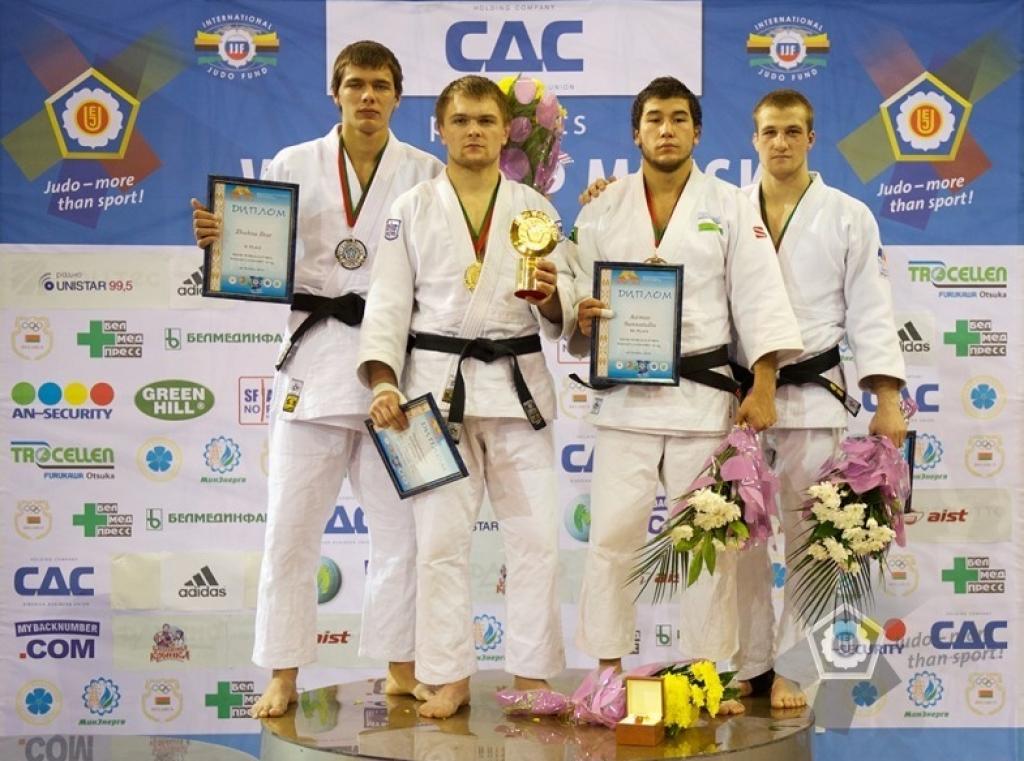 The British male judoka have done a great job. Just four guys coming to Minsk taking three gold medals and a bronze. A unique happening as in the history of British judo, never ever a British male team won three gold medals at one event. British judo is characterised by women’s judo, confirmed over and over again, not in the least at the Olympic Games at home in London.

On Saturday, not the guys from London, but from the other regions of Great Britain including Scotland were sent to Minsk to show their best effort, and they did.

The first gold medal was for Graham Trinder. The small fighter was able to win all his three fights. No, it was not the best ever seeded tournament. But it is a World Cup, at top level and it’s about judo. We know in judo anything can happen, including three gold medals for Britain. The smile was for Trinder after he beat Israelian Ido Bar in the final. Elnur Alijev (EST) and Lukasz Kielbasinski (POL) won bronze.

Canada’s surprise came out of the box of Patrick Gagne. In the final U66kg Yan Vinogradov from Israel led by yuko in a match he dominated. But Gagne is a guy who can make real points and Vinogradov allowed him in the last 10 percent of the match scoring a 100 percent ippon. Gagne claimed the only Canadian male victory in Europe this year. Ofcourse the bronze medal of Antoine Valois-Fortier was more valuable, but Gagne can be proud of a valuable medal in Minsk. Last year not one man was able to win in the World Cups in Europe, so a nice improvement for the team of Nicolas Gill to get another small and modest boost. Canada a building a new team. 21-Year old Gagne is contributing to the spirit of the new young team.

Aliaksei Svyrid definitely added to the spirit of the home nation Belarus U73kg. The home nation collected 7 medals in total, two gold, two silver and three bronze. Svyrid’s medal was unexpected. Canada could have taken two gold medals as Alexis Morin-Martel was surprised by the great start of Svyrid in the final. The Canadian couldn’t make a fist against the fast and offensive Svyrid who showed good judo today with the final as highlight. Aliaksandr Koksha added a bronze medal to the success.

Not a big surprise was the victory U81kg for Aliaksandr Stsiashenka of Belarus. Stsiashenka is by far the most experienced in this category and dominated all his matches with impressive ippons. Ihar Zhukau was more of a surprise in the final. For the last time since 2009 the final was completely Belarussian. At the Grand Slam in Moscow in 2009, Stsiashenka lost to Shundzikau in the final. Now Stsiashenka won. Good performance though for Zhukau.

Britains second gold medal was for Andrew Burns. He defeated Magomedrasul Gashimov in the final U90kg. Burns won his three matches and defeated Igor Dzierzanowski (POL) and Davronbek Sattorov (UZB) in his first two matches. Both men won bronze after all, completing and confirming the perfect day of Andy Burns.

His teammate James Austin is the virtual captain of the Minsk quartet, aged 29. Although coached by Billy Cusack James was leading from the start against Viktors Reshko of Latvia and never let go his lead and won the final convincingly with an ippon. Good performances by the Latvian men but it could have been better if Latvian Vadims Lando had won his semi final against Austin. He gave a good impression but Austin came back in the match. Lando claimed the bronze afterall with a victory over his compatriot Arturs Nikiforenko. Lando showed who was the better judoka today but could have earned more.

In the heavyweight category only four participants who fought a round robin with Zilvinas Zabarskas of Lithuania as the final winner of the four. He won all the three matches. Home player Dzianis Parkhamuk (BLR) won silver and Dmitri Lepp won bronze winning one match and had a close fight against winner Zabarskas.

Thirteen nations were gathered in Minsk, two nations from the west with Canada and Great Britain, most nations from the east with high ippon percentages U90kg and U100kg, no hansokumake at this level is a good effort and victory for the changes done over the last years. The greatest victories were for Great Britain’s medals and the seven of the home nations Belarus.

Watch all photos of Minsk

or review the results: