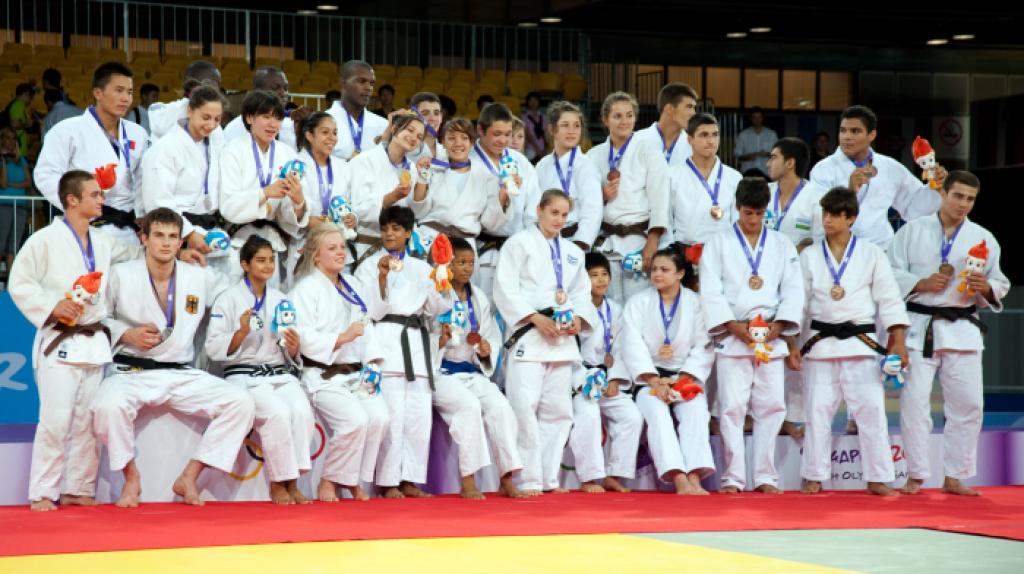 In the presence of Jacques Rogge, IOC President, Judo showed its
universality tonight in Singapore at the final award ceremony of the Judo
tournament of the Youth Olympic Games, Singapore 2010.

Historic Moment
For the very first time in history, a judo team event took place today
during an Olympic competition. Of course, Singapore 2010 is the Youth
Olympic Games, but the facts remain: 12 teams were competing on the tatami
at the International Convention Center – the specificity of today’s
competition being the composition of the teams. The brain-teaser for the
IJF, who was responsible for making up the teams, was to compose the
lineup with numerous criteria: weight categories, nationality, gender and
results. Even if it took hours to find the best solution to arrange the 12
teams, the result was simply outstanding. Being able to look at the back
numbers of the competitors while they were standing on the tatamis, and to
see side by side, on the same squad, judoka from Peru, Spain, Slovakia,
Japan or the Democratic Republic of Congo, just gave an extraordinary
vision of universality. And that precisely, was the objective of the
competition. Of course, it took a few minutes for all members of the team
to fully enter into the concept of mixed teams. For most of the
competitors, is was probably their first team competitions and the first
time they were “obliged”, in some way, to fight, not for a country, but
for an idea. Indeed, it is not something simple. However, rather quickly,
all the ingredients blended together to create a recipe for success.
Coaches and athletes from all over the world were competing for the spirit
of sport and Olympism.

New competition format
All together, 92 judoka from the 5 continents were divided into 12 teams.
A complete team is made up of four young men and four young women,
although even if we are talking about “mixed teams”, the athletes compete
against opponents of the same gender. The competition follows a bracket
format, with the winning team in each match moving on to the next round
and with no repechage. Opposing teams fight eight times, pairing members
of each at their respective weight categories, going from lightweight to
heavyweight matches. The medalists from the individual events are seeded
and allocated across the teams. The four teams that have no gold medalist
get a silver medalist and a higher number of the 16 bronze medalists. If a
team counts only seven members and it has to encounter a team of eight,
the given weight category does not count in the final result and equal
points are awarded to both teams. If the competition casts together two
opponents with a weight difference of more than 20 per cent, the match
will not be held and will be counted as hikewake (0 points). All teams
have an approximate total weight of 510 kg.

Satisfying team competition
The IJF President Marius Vizer, was really pleased with this new
format of competition, “In the framework of the Youth Olympic Games, the
team competition was maybe even more attractive than the individual
competition, which was more or less like any other judo event,” explained
Vizer before adding, “we have seen really good judo in the past few
days, and especially today, the young athletes showed us great techniques
and a huge potential. The motivation was considerable and I was really
pleased to see the overall team spirit and all the mutual encouragement,
which spread throughout the atmosphere. We had a lot of ippon, and we
witnessed a high quality show.”
Another interesting consequence of the competition format directly
concerns the coaches. The rules do not allow having two athletes from the
same National Olympic Committee on one team. And so it happened that at
the same time, the two German or Japanese competitors had to fight on
different teams, and on different tatami. For the coaches, it was a bit
tricky at first, having to cheer on two teams that could possibly have to
fight each other in the subsequent rounds, and actually, that is what
happened to the Japanese coach for instance, when Miko Tashiro and Ryosuke
Igarashi’s teams were facing each other during the preliminary rounds. Of
course, they did not have to combat against each other, but each one of
them was defending their own “new team”.

Tower of Babel
On paper, just before the beginning of the tournament this morning, the
teams composed by the IJF were clearly a metaphor of the Tower of Babel.
How can a North Korean, who only speaks Korean, find herself on the same
team and speak with a Belarusian or a Lebanese judoka? Although it seemed
difficult, it simply worked, and all the language barriers came tumbling
down because of the body language of judo, which was, in the end, the only
common language spoken on the tatami. Proof of friendship and partnership
were obvious, as if the paradox of the Tower of Babel never existed.
So many fighters, coaches, VIPs and spectators at the end of day said that
this multinational team event was an ideal opportunity to go beyond all
the cultural differences and to perfectly illustrate the spirit of these
Youth Olympic Games and the philosophy of judo, which says that when you
are wearing a judogi, whoever you are, wherever you come from, whatever
your culture, religion or language may be, your can speak together and
enjoy powerful moments of friendship.

It is always a difficult choice, but once again, it illustrates the spirit
that was flying high above the tatami today in Singapore: friendship,
universality and respect.

First Olympic medal for small countries
Of course the judoka, young men and young women, will forever remember
that they participated in this special event, that they fought for a team
that was not their national team and that they made new friends and maybe
learned a few words in a foreign language. For those who grabbed a medal,
of course that will be another outstanding souvenir and the format of
competition also had another surprising but positive effect: for the very
first time in Olympic and IJF history, so called “small countries” were
present on the podium, such as Malta, the Democratic Republic of Congo,
Mauritius Island and many others. Judo is a universal sport; nobody has
any doubt about that, but being able to show universal results is one more
element that proves it. The YOG motto this year was, “Blaze the Trail”.
For sure, today’s Judo is forging ahead and clearing a path for others.
Young people who were present here in Singapore, but also junior and
senior competitors, are currently blazing the trail, to paraphrase the YOG
motto, and the IJF and International Judo is now leading the pack.

Semifinals
The rhythm of the two semi-finals contrasted quite noticeably. While the
four minutes of the first fight of the match “Team Essen” vs. “Team Cairo”
on tatami 1 remained quite static, the second semifinal had already scored
five ippons within the same time frame, giving a 3 to 2 lead to “Team
Tokyo” over “Team Belgrade”. It can be noted that two medalists from the
individual tournament, Bae (KOR) and Dmitrieva (RUS), competed against
each other, yet this time it was the Russian silver medalists that
dominated, scoring a nice ippon with a counter attack.
Slowly the pace on tatami 1 increased and the audience was witness to a
festival of beautiful techniques on both mats. The race for the title was
sent into orbit. Back on tatami 2, progressively “Team Belgrade” caught
up the score and finally obtained its ticket to the final with 5 victories
to 3. On tatami 1, the victory ultimately went to “Team Essen”, with 5
victories to 2.

Final
In the women’s under 44kg, the Russian, Dmitrieva, won by ippon
(immobilization) against the Peruvian fighter, Cano, giving the first
point to “Team Belgrade”.
Then the Maltese, Saywell, fought in a very spectacular contest against
the Spanish Rivadulla, in under 55kg, one after the other trying to take
advantage of their opponent with acrobatic movements, but finally the win
went to Rivadulla and “Team Essen”. The third combat opposed KRISANDOVA,
from Slovakia, and Geldybayeva from Turkmenistan. After 2 minutes and 4
seconds, “Team Essen” scored again with an ippon, just at the limit of the
tatami. This was a second point for the blue team. In the men’s under
66kg, two continents were represented as Agibayev (KAZ), from Asia, was
fighting against Cisse (SEN), from Africa. Despite their fatigue, which
was apparent after individual competition a few days ago, and a day-long
team event, the two athletes gave it their all. The next victory went to
“Team Essen” again, allowing them a 3 to 1 lead. Only 42 seconds were
necessary for the Japanese, Tashiro, to throw the New Zealander, Baxter,
giving one more point to “Team Essen”. In the men’s under 81kg, “Team
Essen” kept the lead with the triumph of the Congolese, Loluku, over
Otgonbayar from Mongolia. “Team Belgrade’s” Mansour (BEL) did not fight
for the women’s -78kg because “Team Essen” had no competitor in that
category. Before the last fight, the final result was already known, but
for the beauty and the spirit of sport, one last contest was to be held in
the men’s heavyweight category. After a tough combat, Garcia (CUB) vs.
Piepke (GER), “Team Essen’s” Central American scored a final victory,
giving a clear win (6 – 1) to Peru, Spain, Slovakia, Kazakhstan, Japan,
the Democratic Republic of Congo and Cuba at the same time.

Accompanied by the hearty applause of the audience, in view of the
captivated gaze of Jacques Rogge, the officials and the referees, who did
an extraordinary job all throughout the tournament, the 4 winning teams
mounted the podium and received the last medals of this Olympic session
before uniting together while 4 Olympic flags were raised, and the Olympic
hymn was played.