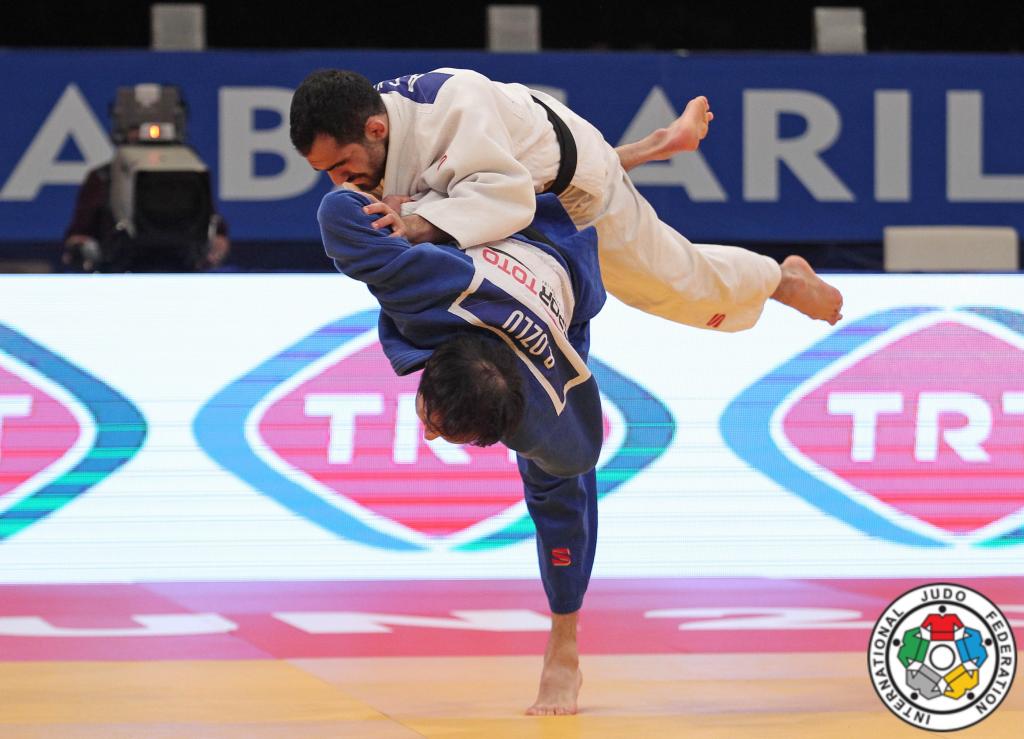 The opening day of the Samsun Grand Prix saw home favourite Bekir OZLU upsetting the odds by taking gold in the -60kg category despite his relatively lowly ranking position of 31 on the IJF World Ranking List. And as if that was not enough to get the crowd cheering, team mate Ahmet Sahin KABA carved his way through his half of a strong draw to end up facing his compatriot in the final to make it a one – two for Turkey. First to fall to Ozlu was Aaron KUNIHIRO (USA) who was thrown within 20 seconds with uchi mata for waza ari, a score that was shortly afterwards upgraded to ippon. Ozlu next racked up three scores to defeat Sergio PESSOA (CAN) before riding his luck somewhat when Diyorbek UROZBOYEV (UZB) was given hansokumake for a leg grab. In the semi final Ozlu disposed of Ilgar MUSHKIYEV (AZE) by ippon to take his place in the final against team mate Kaba. It was not a classic final unfortunately and, despite Ozlu having scored a waza ari, the contest petered out with a frustrated Kaba collecting four penalties leaving Ozlu to take the gold.

When asked about his overriding thought of the day Ozlu answered, “Of course I am happy to win a gold medal at a Grand Prix especially here in front of my home crowd. I think it would probably have been better for the crowd if only one of us had made it to the final as with two the crowd had some divided loyalty. The most important thing however was that one of us should win the final for Turkey.”

It was admittedly not Ozlu’s most sparkling performance but the win sent a powerful message that Ozlu is someone to be reckoned with. “I always aim to throw for ippon in my fights. But some of my opponents come to the mat looking to throw me for ippon. So it is not always easy,” said Ozlu. Although not quite to capacity, there was a good enough crowd to lift Ozlu and he remarked upon this saying, “It is great for Turkey to have a Grand Prix and you can see from the way the fans have responded that they really enjoy it. The Turkish Judo Federation has also made a really good job of getting a good crowd in to the stadium.”

The win brings Ozlu one step closer to qualifying for the Rio Olympics and despite a solid performance from Kaba, it is to Ozlu that Turkey are likely to look for their representative in the -60kg category.