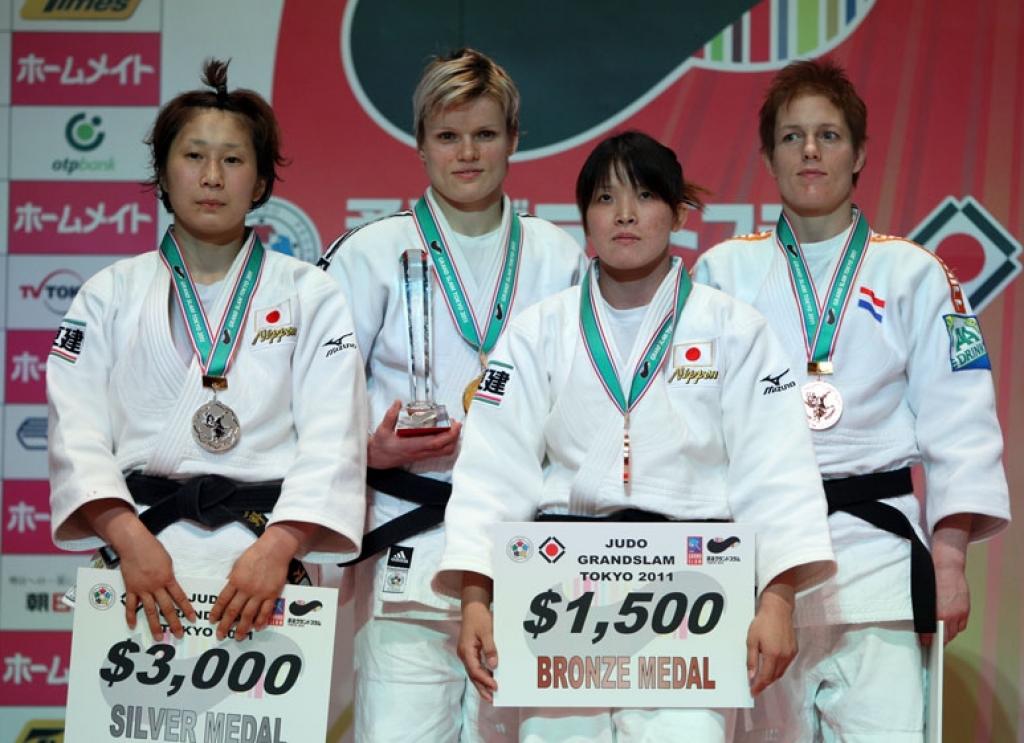 A fantastic gold medal today for Urska Zolnir of Slovenia at the Grand Slam of Tokyo. Zolnir defeated the undisputed favourite Yoshie Ueno who won the event two years ago. Zolnir won the event for the second time in her career, in 2008 she defeated Ueno as well. Miki Tanaka won bronze that year, just like today. Dutch Elisabeth Willeboordse collected a bronze medal, she lost against Ueno in the semi final. Her Dutch equivalent and competitor for an Olympic spot Anicka van Emden lost to Tanaka in the second round. All quarter finallists came from Europe which says a lot about the strength and chances for the Olympic Games for Europe.
Ueno paid back for her victory against Zolnir at the World Championships semi final. Today Zolnir made the difference with a yuko. In the semi final she defeated Miki Tanaka. The first of three Japanese opponents was Haruka Yasumatsu in the first round. Claudia Malzahn of Germany finished fifth after losing to 30-year old Slovenian powerhouse.
It’s her 13th victory in the World Judo Tour since 2001 when she won the Grand Prix of Sevilla. Sofia three victories, Budapest and Tokyo two since today.
Urska Zolnir is the only Slovenian who has ever won an event on the soil of Japan. Zolnir won an Olympic bronze medal in Athens in 2004 and two bronze medals at World Championships.

Japan won three gold medals today in the men’s category. U81kg it was Tomohiro Kawakami who beat Leandro Guilheiro (BRA). German Sven Maresch continued with a good result after winning the Grand Slam of Moscow a bit luckily, now he took an important bronze medal. His opponent for Olympic Qualification Ole Bischof lost in the 1/8 final against Keita Nagashima who won a bronze medal today.

One more medal so far after two days for Europe compared to last year. Nine against eight in 2010 with the same categories and one more final spot.