USUAL SUSPECTS FROM GEORGIA AND THE RETURN OF CYPRUS 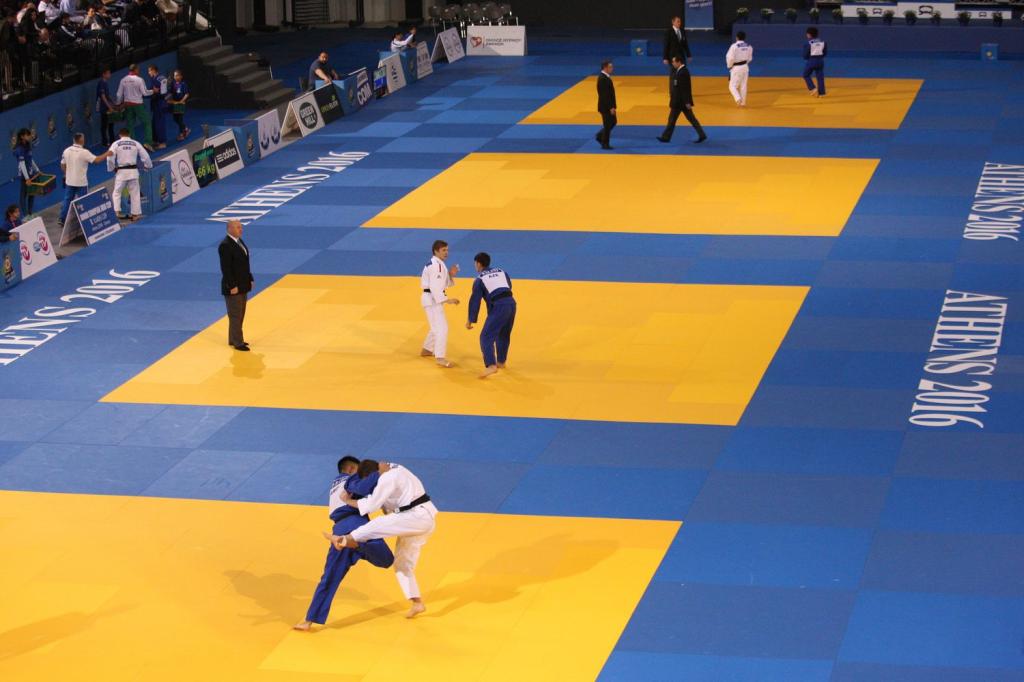 The curtain of the Junior European Judo Cup held in the indoor Olympic Hall of Palaio Faliro an formally known as «8th Ilias Iliadis Cup 2016», finally fell. Georgia emerged the dominant force for yet another year, Greek women judoka made their presence felt and Cyprus managed to enter the list of medals after an absence of three long years. This tournament was described by the EJU authorities found these days in Greece, as the jewel for the calendar and the Union, since according to their own words “organization-wise has nothing to envy from the European Opens and Grand Prix”. All in all, 302 athletes from 24 countries competed in Athens.

BEGLARASHVILI: «Athens is my lucky city, Ilias Iliadis is my idol»

Robinzon BEGLARASHVILI gave his home country Georgia one of four total gold medals at the 8th Iliadis Cup. Found at the summit of his -60kg category, he kept no secret of the fact that he was intrigued to take part in a tournament baring the name of his idol. “I am very happy for this medal, especially earned in an event dedicated to the great Ilia Iladis. I am very glad that I saw the flag of my country rising and I heard the national anthem of Georgia in the games that honor this great judoka, who was also a Georgian-born. He has been my idol; an incredible athlete, a legend of the world judo. And I’m confident that at the Rio Olympics I will couple my medals” said Beglarasvili, who made himself an early 18th birthday present by winning this gold medal.

For the athlete from Georgia, it was the second medal on Athenian soil, after the bronze one won in the European Cadet U18 Championships of 2014. “Your country brings me luck especially this year as it is my first medal in the U21 category». Beglarashvili, recently crowned champion in his native Georgia, referred to his imminent competitive goals; “The task ahead of me are the European Championships, held in Malaga in September. My spirits have lifted a lot and I anticipate some success there as well.”

Concluding, Beglarashvili fervidly referred to judo as being his whole life. “It’s more than an exceptional sport. It’s my whole existence, a code to live one’s life. Every step that I take, every moment of my daily life is devoted to judo. Judoka leads a life full of discipline, courtesy and high values.”

The spotlight was thrown on women to save the prestige of Greek judo for a third consecutive year as Vasili BALAMPANASVILI, crowned World Champion in U18 category last year in Sarajevo, was eliminated by the Armenian Davit NALBANDYAN in the round of “32” of -81kg category. This year, though, there was a dearth of the glow of gold and hence the Greek national anthem was never echoed in the stadium, as it was the case last year and 2014 owing to Elisavet TELTSDIOU.

The Greek woman Antigoni ALEIFERI won silver in the under 78kg category. She was only defeated by the Israeli Raz HERSHKO, gold medallist at the European Cadet Championships U18 in Sofia in 2015. Aleiferi, a Polytechnic of Alsace sophomore, was undoubtedly disappointed: “I expected the gold medal, but unfortunately it did not come my way, although I had been better prepared than other years. A shoulder injury made it all the more difficult and I clenched. In the quarterfinals I fought better, but in the final I was subdued by anxiety”. The two rivals crossed swords also in Iliadis Cup 2014 in Thessaloniki, when the Israeli managed to emerge victorious again and win the bronze medal in the same category.

Aleiferi concluded: “I have been training in France, where the level is highly competitive. Imagine that in Alsace alone, there are more judoka than the whole of Greece! I am currently studying chemical engineering and juggle it with my favorite sport, judo.»

The second Greek medal came from Mina Agneta RICKEN in the -63kg category. After her 5th place last year, she won bronze by beating Sol CELLERINO from Argentina in the repechage final. “I performed better this year because my training overseas helped me a lot; I was in a high spirit and had no nervousness. It was a very nice feeling when I climbed on the podium and I feel very honored to have excelled in a race that bears the name of Ilias Iliadis. I dedicate the medal to both my coach and my father who follows me everywhere. Now I set my eyes on the European Championships held in Finland”, said Ricken.

Cyprus in the medal table after an absence of three years

Cyprus returned to the medals table of «Iliadis Cup» after an absence of three years (3rd place in 2012). Last time they won a silver medal was in the 2009 event. The island of Aphrodite found its protagonist in Vasiliki KOURRI, who was found in the second step of the podium in the -44kg category. “I toiled away and reap the rewards; the feeling was awesome! However, I believe that if I had been a little more stubborn, I could have won the gold medal. I was teemed with pride to see the flag of my country rising on the pole. I dedicate this medal to my family and my coach who support me day in, day out” said the 16 year old gymnast. She is currently attending a sports school, which facilitates her training without worries about playing truant!

The coach of the Cypriot team, Lavrentis ALEXANIDIS, is a 2005 and 2008 European bronze medallist for Greece. He referred to the development of judo in the country where he currently lives and works. “We gradually improve ourselves and feel that we can be serious medal contenders in international competitions. There is a lot of young blood and we have been working in the best way possible despite the difficult financial state. Judo is beginning to take the place it deserves among sporting events in Cyprus, which particularly pleases us” said Lavrentis Alexanidis.

Starting tomorrow, Monday April 4th through Thursday, April 7th, the EJU Junior Training Camp will be held at the Sport camp of Loutraki, with the participation of more than 170 judoka.