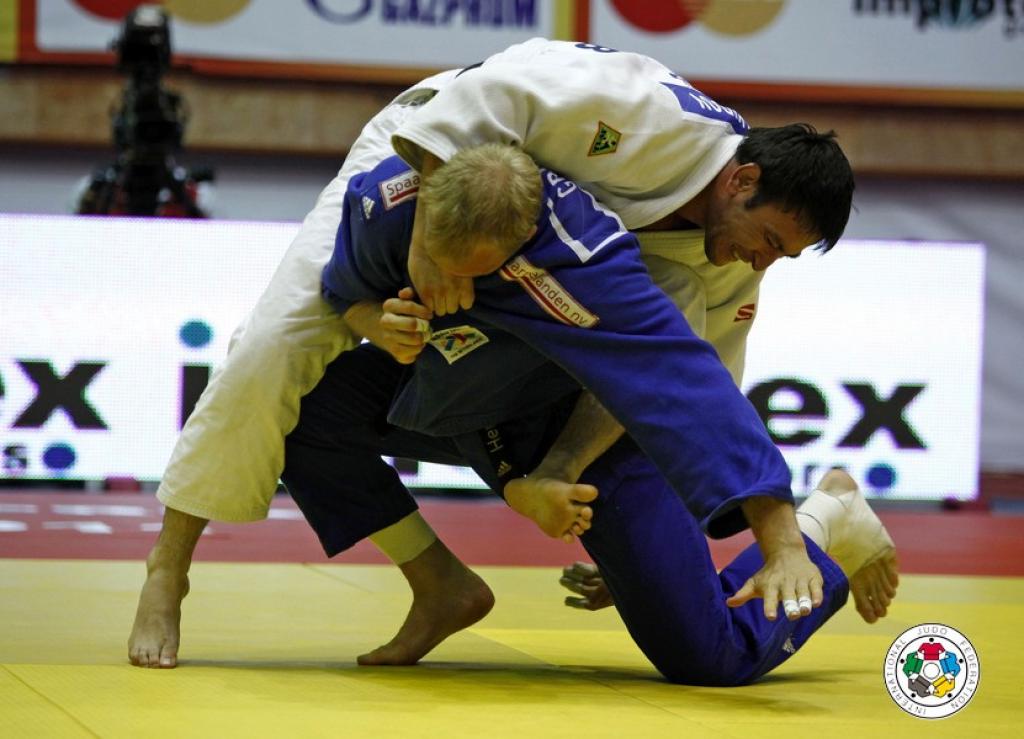 Uzbekistan was the surprising winner of the Grand Prix in Baku this weekend. The Asians won two gold medals, today Dilshod Choriev added the second title, while Ramziddin Sayidov had chances for the third gold medal.

In the U90kg category a terrible battle for the gripping was engaged between the two finalists Kirill VOPROSOV (RUS) and Dilshod CHORIEV (UZB). After several shido for passivity given to the
two fighters, Choriev took the lead by yuko just before Voprosov was disqualified for a leg grab, which is now forbidden in judo. Before that, Elkhan MAMMADOV, currently 5th at the world Ranking list, won bronze on his territory in Baku and generated an incredible atmosphere for the first semifinal of the day. The 29 year-old athlete from Azerbaijan seems to like the Sarhadchi stadium, where he won the Masters title last January. But to enter the final, he was opposed to Kirill VOPROSOV (RUS), member of the Russian rising talent who is only ranked at the 39th position in the World Ranking list.
Dilshod CHORIEV, ranked 6th in the World Ranking List was opposed to number 22nd, Karolis BAUZA, from Lithuania in the semi final. After a tough beginning where both fighter neutralized themselves, the Uzbek, Choriev scored and got his ticket to the final and won gold afterall.

U78kg
The winner of the women’s U78kg really represents the youth. Only 20 years old, Abigel Joo wins her first Judo Grand Prix. After a first half of the final where the two finalists couldn’t really take the advantage, she countered one of the attacks of German Luise MALZAHN, also 20 years old and scored a beautiful and efficient ippon. Turning herself towards the public, she could great her delegation which was supporting her all day long.
In the first semi-final, the 20 year-old Luise MALZAHN (GER) was opposed to Lucie LOUETTE (FRA), recently silver medallist in Istanbul, on the occasion of the European Championship. Without her teammate, Audrey Tcheumeo, who beat her in Turkey and who now seems to dominate the category (even if she is still at the 4th position in the WRL), Louette was again in really good shape in Baku. And she was in the final, she was sure at least to get an other silver medal and may be a gold one … until the very last second. Leading my waza-ari, she made THE mistake and was caught by Malzahn, exactly on the final gong.
In the bottom half of the draw, Abigel JOO (HUN) and Marhinde VERKERK (NED) dominated the debates to enter the final four. The winner of the U23 European Championship, last November in Sarajevo, Joo, therefor confirms that one will have to count on her in the future, whereas Verkerk showed one’s worth that she is still competing at the highest level, after her world title, in Rotterdam, back in 2009. But only a few second were necessary for Joo, to find the perfect combination of movements to throw Verkerk for ippon.

U100kg
It has been a difficult day for the Dutch fighter Henk Grol. Nevertheless, he won the men’s under 100kg and adds one more line to his already long prize list. The final had a strange rhythm, both athletes neutralizing themselves and opposing their power. Penalties were dropping. At that little game, Grol scored a yuko even if at the end, he won by a waza-ari, equivalent to the three shido that Sayidov, who tried to play with the leg grab rule, received.
Earlier today, it has not been so easy for Olympic Bronze medallist and two time World Silver Medallist, Henk GROL (NED), but he was able to make it through the preliminaries to be opposed to a “legend” of the category, Ariel ZEEVI, in the first semi-final. The 34 year-old champion from Israel, also Olympic and World medallist is now a veteran of the tatami, but he is still very strong and many young judoka discover that the years also make the value of a champion. Two fighters looked a little tired and the youthfulness of Grol finally allowed him to pass the Zeevi’s trap.
In the second semi-final, the Uzbek Ramziddin SAYIDOV (UZB) confirmed, once more, that his country was definitely a nation of judo and good judo, specially after the 100% Uzbek final of the second day in Baku. His opponent was Daniel BRATA (ROU) who almost stopped judo two years ago. Born in Baia Mare, National champion in 2003, he later moved to Bucharest where he found a second wind in his career. But only 14 seconds were necessary to Sayidov to score ippon and to enter the final.

+78kg
The five minutes of the regular time plus the three minutes of the golden score were necessary to determine the winner of the Women’s +78kg weight category. Nevertheless, the referees had to take their flags out to give the victory to DONGUZASHVILI, who wins in Baku a very nice gold medal.
The very young Iryna KINDZERSKA (UKR) proved in Baku a great potential while entering the final block of the women’s heavy weight category against Song YU (CHN), ranked 12th at the World Ranking List. But after only 23 seconds she was lying on her back, thrown by a devastating ko-soto-gari from Yu. In the second semifinal Tea DONGUZASHVILI (RUS), who is now 34 year-old is a really experienced fighter, specially with her bronze medal at the olympic games and her two bronze medals at the world’s. She was opposed to Franziska KONITZ (GER), winner of the World Cup in Bello Horizonte (BRA) in 2009. A tremendous harai-goshi from Donguzashvili opened here the doors of the final.

+100kg
After his recent 8th continental title, harvested in Dakar, last month, El Shehaby came here to win and that’s what he did. Never in danger all day long, the fighter from Egypt added 200 more points in his pocket, confirming is ranking list position.
Earlier during the day, the “Block of Cairo” who is the highly ranked in the WRL of the men’s heavy weight (2nd position), behind the unreachable Teddy Riner from France made no details, winning all his fight by ippon. The second qualified judoka for the semifinal of the heavy weight category was the 23 year-old Stanislav BONDARENKO (UKR), number 10 in the WRL. But El Shehaby was far too strong for his opponent and after a period of observation, he just caught Bondarenko and immobilized him until the last second, with only one toe still touching the fighting area. But that was enough to give the victory to El Shehaby, who entered the final after a quite easy day.
In the second half of the table, the elimination of German Andreas Toelzer, who had a good start in the morning though but couldn’t pass the stage of the preliminaries, opened the championship for the -100kg looking athlete, Vladimir Osnach, from Latvia. The fourth competitor qualified for the semifinals was Ihar MAKARAU (BLR), who in semifinal won by ippon.

text by IJF
Pictures can be found at http://www.ijf.org