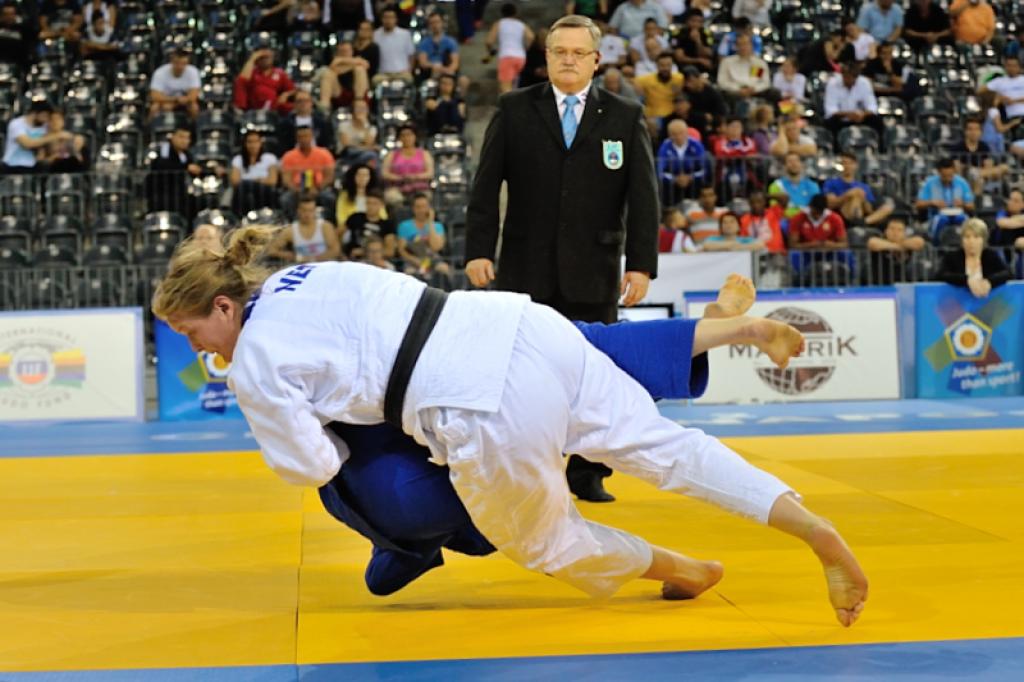 The Dutch have a long history of success in the under 70kg. Irene de Kok was the first Dutch fighter in that category to win an Olympic medal – bronze in 1992 in Barcelona. Later on it was Edith Bosch who dominated that category for many years with silver in Athens 2004 and bronze in both Beijing 2008 and London 2012. Following quickly in the footsteps of Bosch is Kim Polling the current world number one. And there were other strong contenders like Linda Bolder or Esther Stam, both of whom have decided to change nationality.

It seems now that Sanne van Dijike another Dutch youngster is on course to continue the success story. Only 19 years old she has already arrived at the senior level. Van Dijke, still junior this year, has already collected nine gold medals at Junior European Judo Opens, but today in Cluj won her first gold medal at senior level. She did so in fine style. All five fights she dominated and won by ippon. “I am so happy that I triumphed today. Of course, I know that a European Judo Open is maybe not the biggest event. But I put myself under so much pressure that it was definitely one of the most difficult so far”, Sanne van Dijike explained. Although she won her first senior medal at the Grand Prix in Düsseldorf (bronze) in February, she found things at the following events in Samsun and Zagreb less to her liking going out in the second round. “That shouldn’t happen again. I wanted to show that I can win a medal.” And today she showed that clearly.

After her opening contest which she won against Carola Paissoni ITA she defeated the number one seeded and former African champion Antonia Moreira ANG with koshi waza. “I had already had one win against her in Düsseldorf. But there it was only by shido. I expected a tight contest. But finally I threw her for ippon”, she said and smiled. After winning against the Russian Irina Gazieva she had the hardest contest: the final against the French fighter Valeriane Fichot. “At the beginning I felt her power and was quite impressed. But then I focused again on my own aims and threw her with a counter”, van Dijike said happily.

Sanne van Dijke almost went unbeaten last year: She only lost twice in 2014 and ended up with a 7th place at the main event of the year: the Junior world championships in Ft. Lauderdale. The Junior worlds are also her stated highlight for this year. “It is the last chance for me to win gold there before I will fight in seniors”, she said and added: “The junior level I feel I dominate, I am already used to being successful and winning there. Not yet in senior level though. There I am still collecting more experience.”