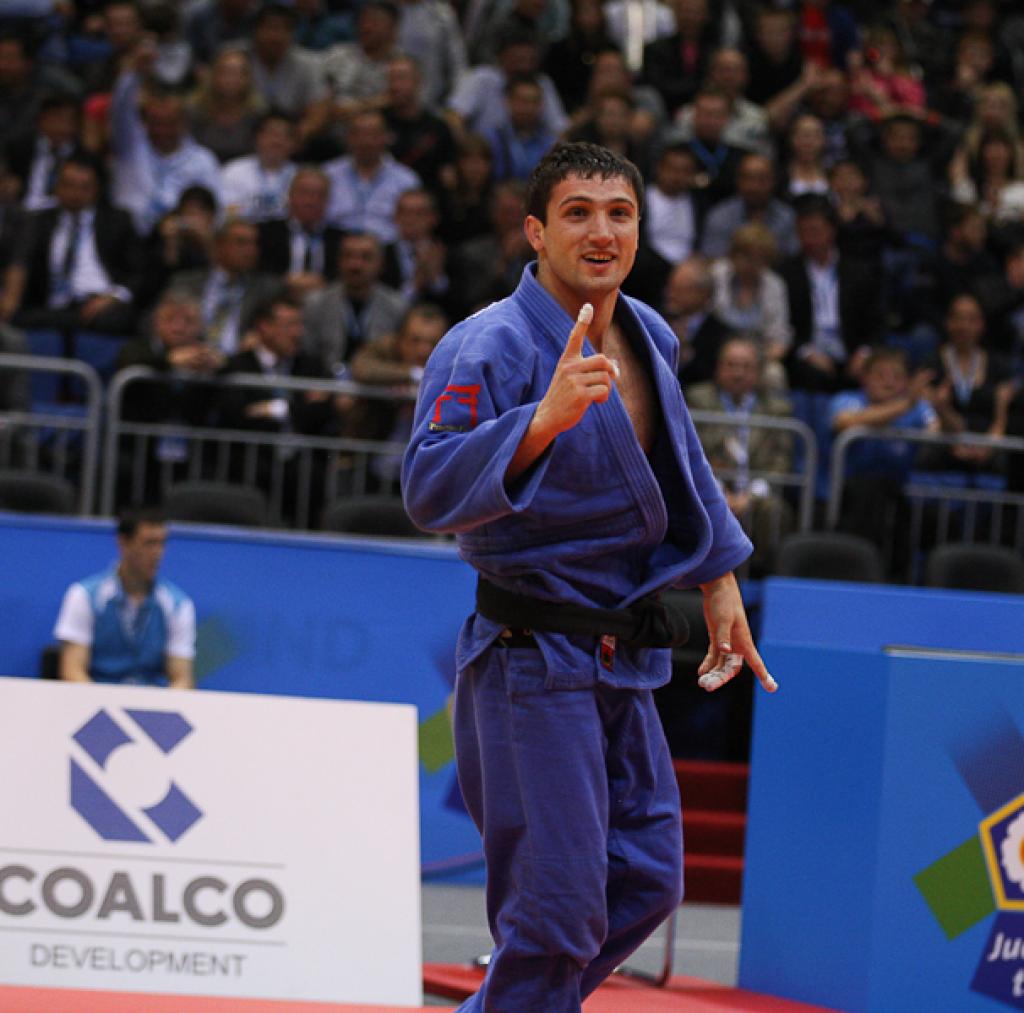 Georgian Varlam Liparteliani finally won the European title. In an attractive final against homeplayer Grigorii Sulemin he collected his first European title after his third final (2009 and 2010). Liparteliani is ready for the Olympic Games and mentally this is an important motivation winning a final. This year he is in the winning mood taking the gold in Tbilisi’s World Cup and the Grand prix of Düsseldorf. His compatriot Zurab Zviadauri didn’t show up at the weighing and wasn’t mentally prepared for this championships after weeks of training getting back from 115kg as a coach. Liparteliani was already qualified based on his 8th position at the IJF ranking.
In the final Grigorii Sulemin was supported by 4,000 fanatic supporters who have seen a great fighter in Sulemin. The Russian made one of the best points of the tournament defeating German Christoph Lambert in the semi final. However despite his energy and great points shown this tournament Liparteliani was able to score the Ippon 90 seconds before the end.
Courageous performance by Sulemin who had the initiative in the final but Liparteliani had already paid his learning money in previous European finals.

Liparteliani said: “ I can’t believe it yet. I even cried. I had lost twice in the final and I wanted to win so much. It is great to have won this first gold medal at the European Championships for Georgia. Georgia needs this gold medal”
“Obviously the crowd was on the side of Grigorii Sulemin, but this motivated me even more. I know how hard it is to lose the final in your home country, the same thing happened to me in 2009 in Tbilisi. I know exactly how he feels right now. But this is the sport.“

Sulemin wasn’t able to comment indeed but his coach Valeri Makarov could analyse the match: “The lack of experience was shown. Maybe he wasn’t focused enough or he wanted to win too much. He let a technique slip through that he knew the Georgian uses. I hope he’ll learn from his mistakes.“

Without a doubt a surprising category as favourites were defeated in the beginning of the tournament. Marcus Nyman, European Champion of 2010 lost against 21-year old Czech Alexandr Jurecka and 2011 European and World Champion Ilias Iliadis lost to Christophe Lambert (GER) who reached the semi final. Zurab

In the fight for bronze Roman Buffet fought against Andrei Kazusionok (BLR). Kazusionok defeated Serbian Dmitri Gerasimenko who lost against Lambert in the quarter final. Kazusionok needed the golden score to make the difference against Buffet by ippon. The judoka of Belarus was European Champion in 2009 and won a bronze World Championships medal in 2005 and previous European bronze in 2008.
Kazusionok comments: “I’d give myself four points out of five. I didn’t compete for two years as the rules changed and all my techniques and throws could not be used anymore. So I had to start from scratch and relearn everything. Now I feel I have adapted and I am on my way back.“

The other bronze medal was for Christophe Lambert against Alexander Kukolj. In fact both outperformed today and both deserved a medal for their courage and fighting spirit today. Lambert led the match and added a waza-ari after 90 seconds. Halfway the match he threw Kukolj for Ippon and left Serbia with empty hands. Excellent European Championships for Germany and Lambert was one of the surprises.

Lambert was extited about today’s performances: “This is crazy. It was a perfect day except for the semifinal. I don’t know if it will be enough to qualify for the Olympic Games, but I am very happy with this medal. Today I was really relaxed and I had my coach Sven Loll at my side. I couldn’t have been any better prepared for this event.“

Liparteliani is the first ever European Champion for Georgia in this category. The last to win the European title was Zaza Kedelashvili, he won the triple between 2006 and 2008.