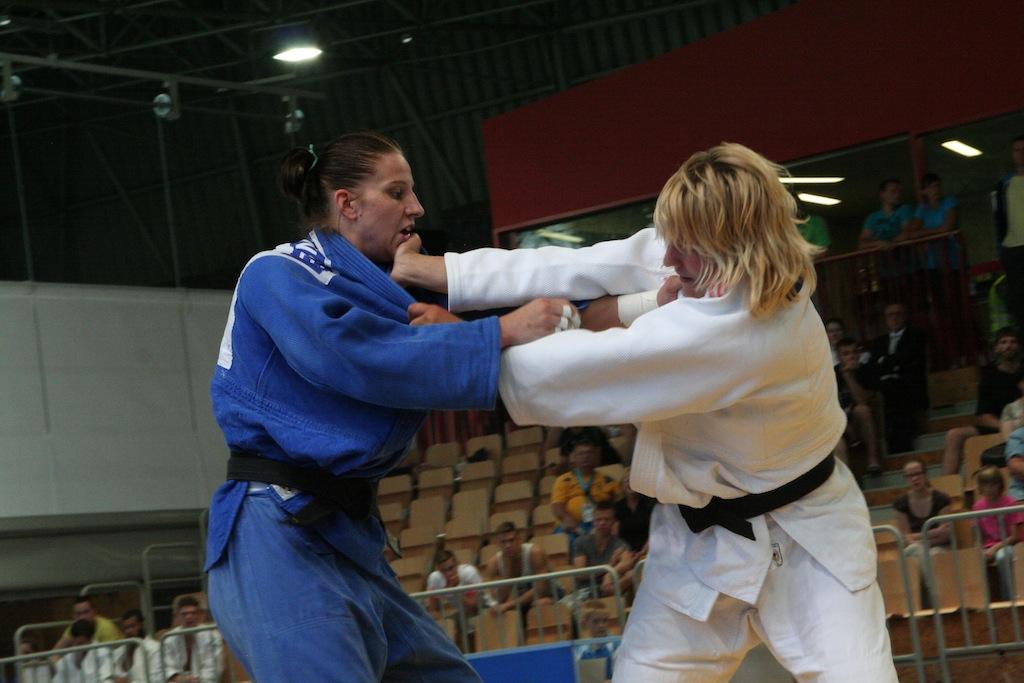 The European Cup in Podcetrtek continued on Sunday. Surely the most expected category of the second day was -78 kg with the biggest Slovenian hope for gold. “We did very well yesterday”, Mr. Trbovic, coach of the Slovenian junior national team said. “But our fans expect to hear the Slovenian national anthem here in Podcetrtek”. And Ana Velensek proved that she can cope with the pressure. “I was a bit nervous today because we did not win any gold yesterday and I really wanted to please our judo fans” Velensek said. But the final against Stevenson of Holland was not easy at all. In the opening seconds of the fight Velensek was thrown for yuko. “I did not care too much about the score. I heard the fans and really felt their big support. I prepared my attack well and threw Stevenson with my favorite technique soto-maki-komi. I hope that me and my team-mates will do well also next week in Budapest”, Velensek concluded.
The first category of the day was however -81 kg. “We expect a lot from Aslam Lappinagov in -81 kg”, Mr. Shishikin, the head coach of the Russian U-23 team said. “But except of -81 kg we do hope to get more medals also in other categories. But Lappinagov is in a very good shape here”. The former European junior champion indeed showed his qualities today in Podcetrtek. In a very beautiful final match he defeated Ndiaye of France with waza-ari awarded for an uchi-mata. “This is my second victory in the Senior European Cup”, Lappinagov said. “The style in senior category is quite different from juniors and I still need some time to get used to it. Last year I won the European Junior Championships and I will do my utmost to get the European title also in U-23. I also expect to do well in the Russian Seniors Championships to be held in October”.
The Russian team expected to win the second gold in -70 kg but Diedrich of Germany produced a spectacular uchi-mata against her final opponent and won the first for Germany.
The crowd witnessed another breathtaking fight in the -90 kg final. Kovtunov of Ukraine threw Lamour of France for yuko in the beginning of the match but Lamour did not give up and produced several dangerous attacks. In the last seconds of the fight the French put everything he had in stake but Kovtunov countered his last attempt and won the fight.
In -100 kg category Tobias Mol of Holland was the best today. In the final he first scored yuko with a seoi-nage. Then he scored waza-ari with a sumi-gaeshi and immediately continued into osae-komi and scored the second waza-ari. ”I have already won some medals from senior tournaments but till today the gold medal has been missing in my collection”, Tobias Mol of Holland, the winner of -100 kg said. “I am very happy to win a tournament like this. I hope to continue performing well also in the tournaments to come.”
Another gold went to Holland thanks to Lena Buseman in +78 kg category. Despite being 2 shido down she managed to equal the final fight some 10 seconds before the end of the match and score the winning yuko in the last second of the fight.
Similar result turnover showed Khammo of Ukraine in +100 kg. He was even waza-ari down but managed to win the fight with a massive tani-otoshi.
The Slovenian organizers did an excellent job in Podcetrtek. “I am very much satisfied with the tournament”, Urska Zolnir, 2012 Olympic Champion, who was together with Mr. Fabjan in charge of the tournament, said. “The quality of judo this year in Podcetrtek was very high and we saw a lot of beautiful matches here. I must admit that the organizing work is quite demanding. When I was competing here I just concentrated in my next fight but now I have to take care of many other tasks. But I hope that the participants enjoyed their stay here in Slovenia and I am looking forward to seeing them again next year”.