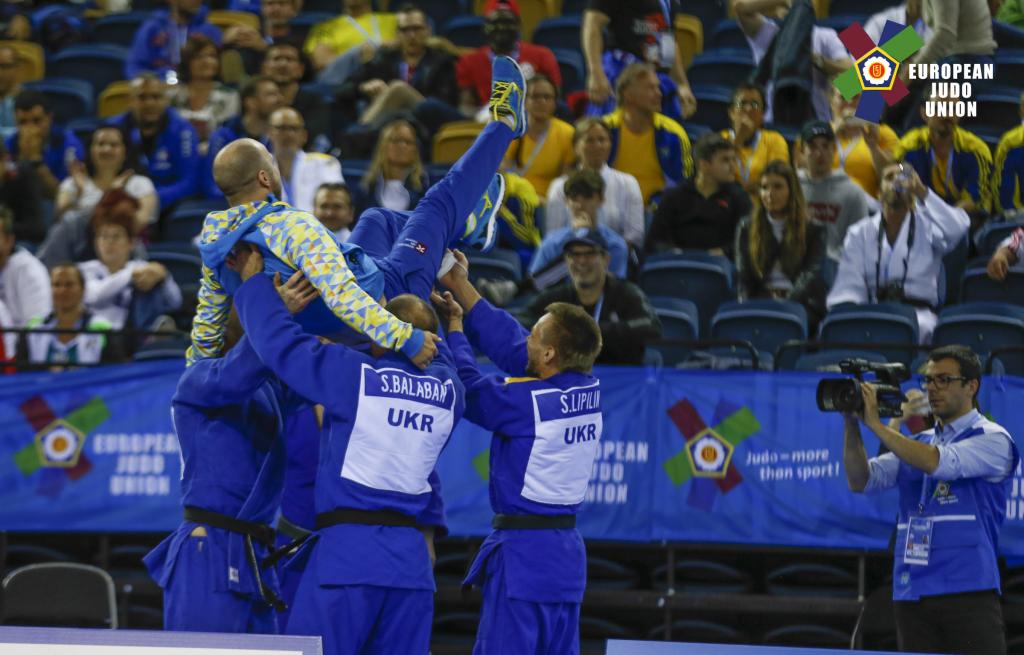 The fourth and final day of the event brought an astounding entry of 51 teams from across Europe. With a packed crowd, the Emirates arena in Glasgow was filled with energy, the veteran competitiors waiting in the tunnel to step on to the tatami.

Showing that European judoka are as united as ever, the tournament witnessed numerous mixed teams in the arena. In this event, rules allowed for one competitor from another nation to join with another country.

Today this demonstrated that together we are stronger and that the EJU is one family.

Azerbaijan TM 30 and TM 40 were coached today by players that fought and medalled in this tournament. Vugar BUDAGOV (AZE) attained a bronze medal in the M3 -73kg category on day 2 of the event. Farhad RAJABLI (AZE), competed on the first day of individual tournament in the M6 -90kg category, claiming the gold medal, however both swapped the tatami for the coaching seat today to steer their men to victory.

This was not RAJABLI’s first achievement on the veteran circuit, previously securing six gold medals, four silver and two bronze in Veteran European Judo events. The Baku-based coach also had a successful experience as a junior and senior competitor. When asking about his history within the sport, he is proud to say that it has been part of his entire life,

“my first European Championship medal was as a junior competitor in Miskolc, Hungary in 1978. That’s exactly forty years from my first to last European medal.”

This very experienced judoka enjoyed his senior career, achieving many titles in Soviet Union tournaments, his knowledge now passed on to his students and assisting with his coaching skills today. Both the TM 30 and TM 40 groups fought hard to take home the bronze medals.

The triumph of the day came from the strong Swedish teams. Their men’s TM 50 stole the show in their final, reaching glory with help from day one’s King of Kosovo, Anton CENA (KOS), who paved the way for the rest of the team. The women’s TM 30 closed the tournament with an emotional final contest,  their adopted player, Sabine BONITZ of Germany bringing the cup home to them. 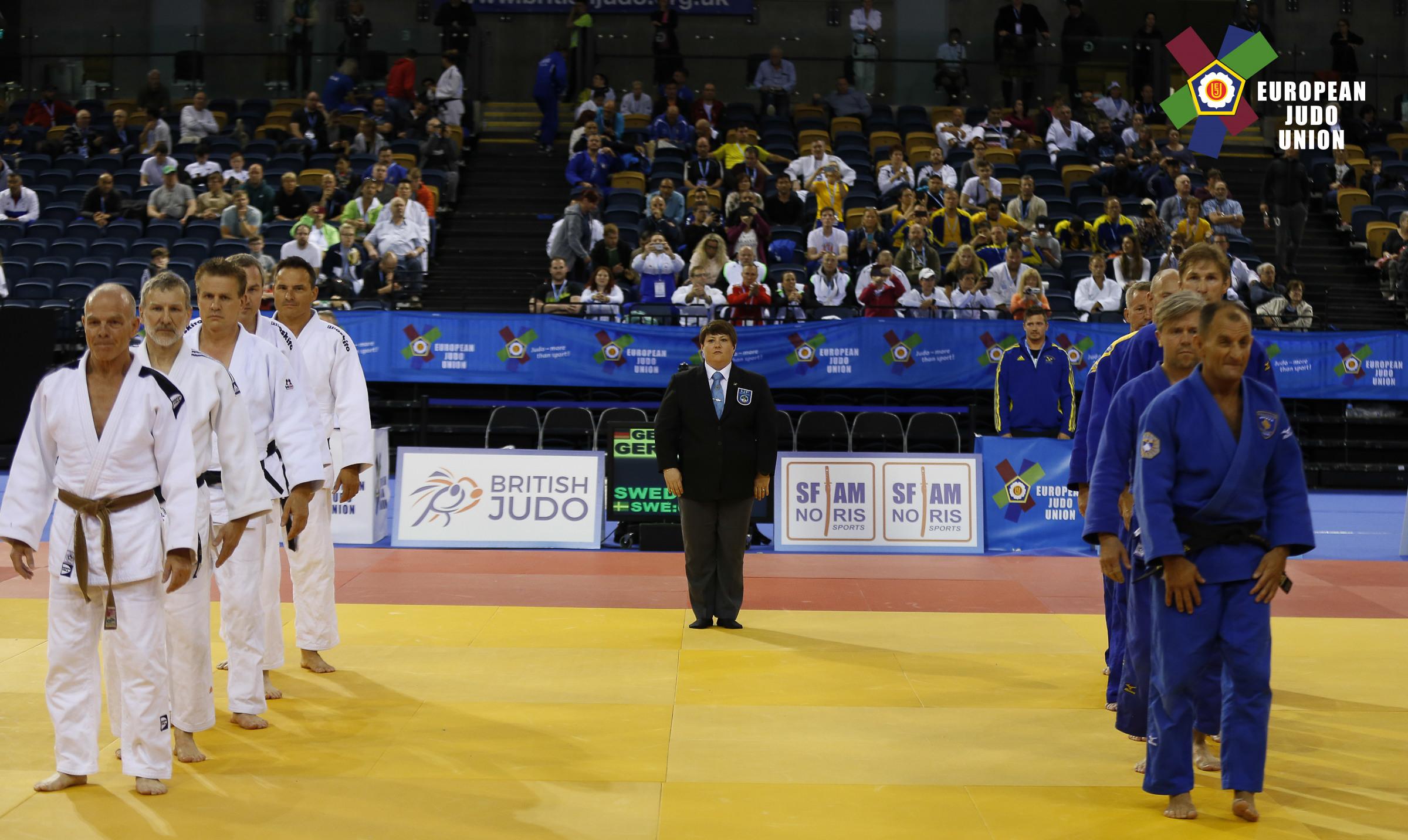 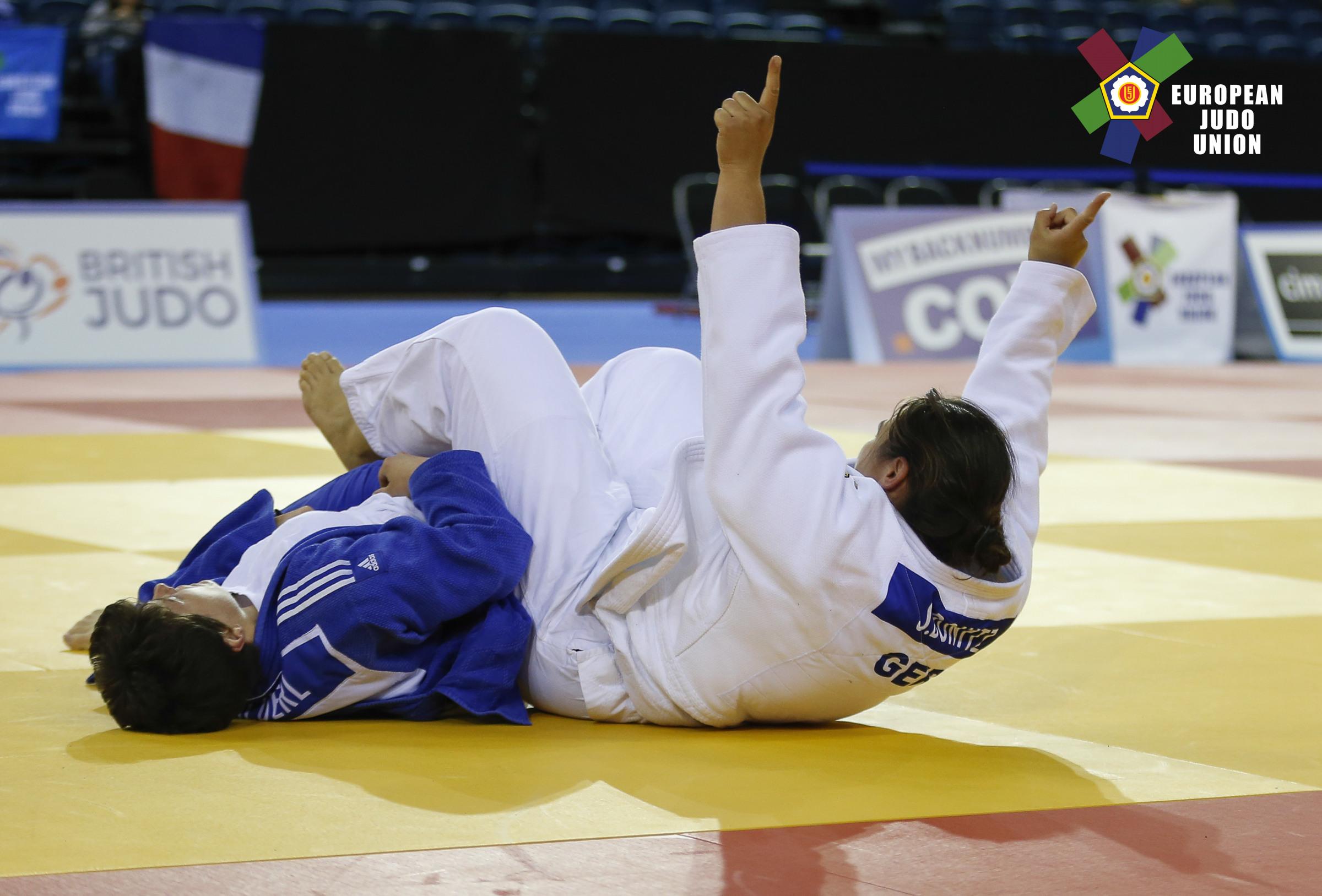 Sabine BONITZ (GER) helping the Swedish team on their way to the top of the podium. – Carlos Ferreira

– How does it feel to achieve the gold in the Veteran European Judo Championships today?

“The win for us today is amazing, we’ve worked really hard to get here, its a great feeling.”

– Do you think having the crowd support and of course the men’s TM 50 securing a gold, helped you at all?

“Yes, it gave us the motivation to go home with a womens title and we did it!”

– You have such a fantastic following and all wearing the Master Team Sverige tracksuits, do you all train together?

“We’re actually from all over Sweden, it’s lovely to come together to achieve something like this as a team, but I’ve been practicing judo for over thirty years now and I like having the opportunity to keep competing.” 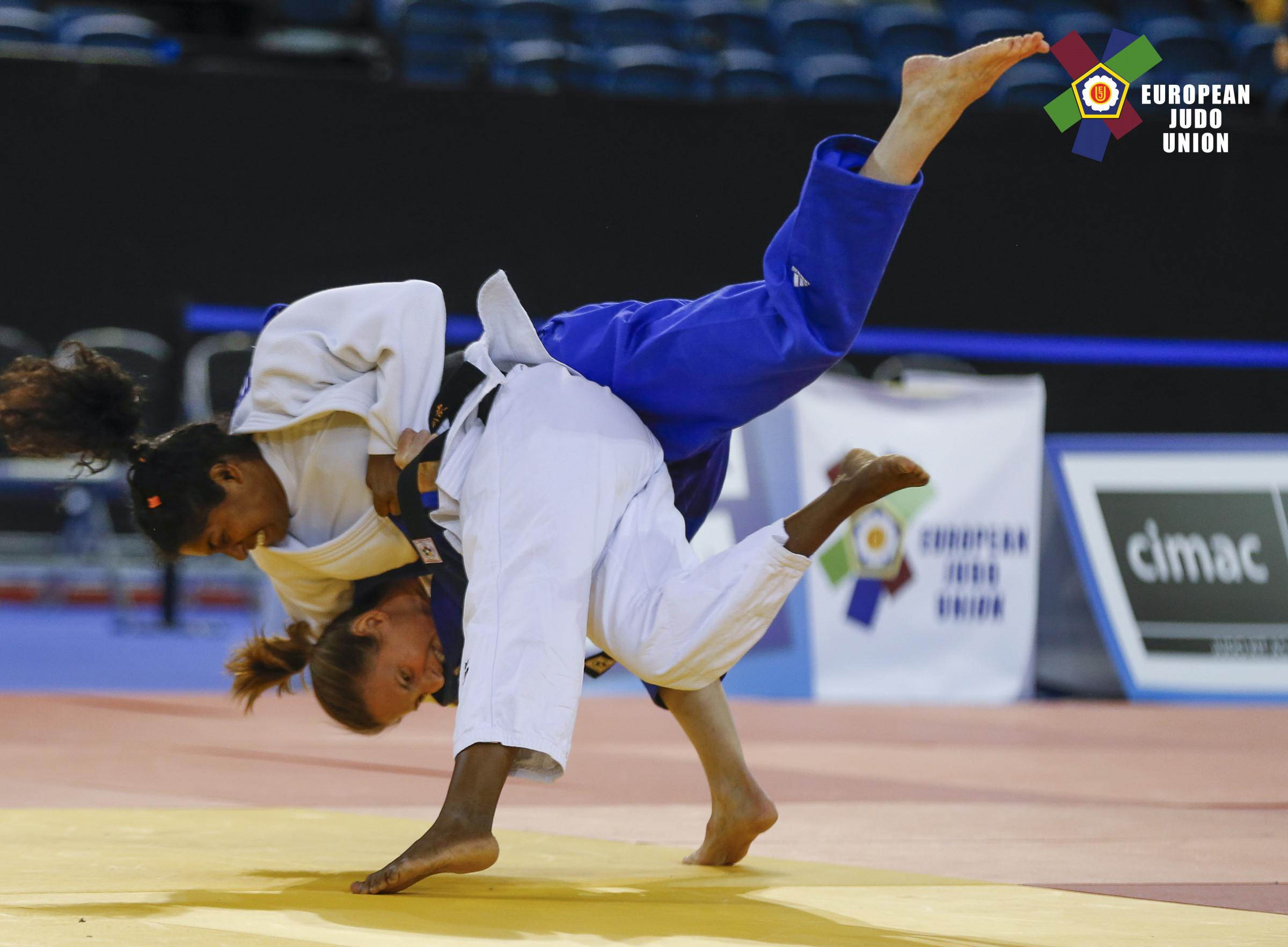 Ida LINDGREN (SWE) accumulating a win in the final round. – Carlos Ferreira 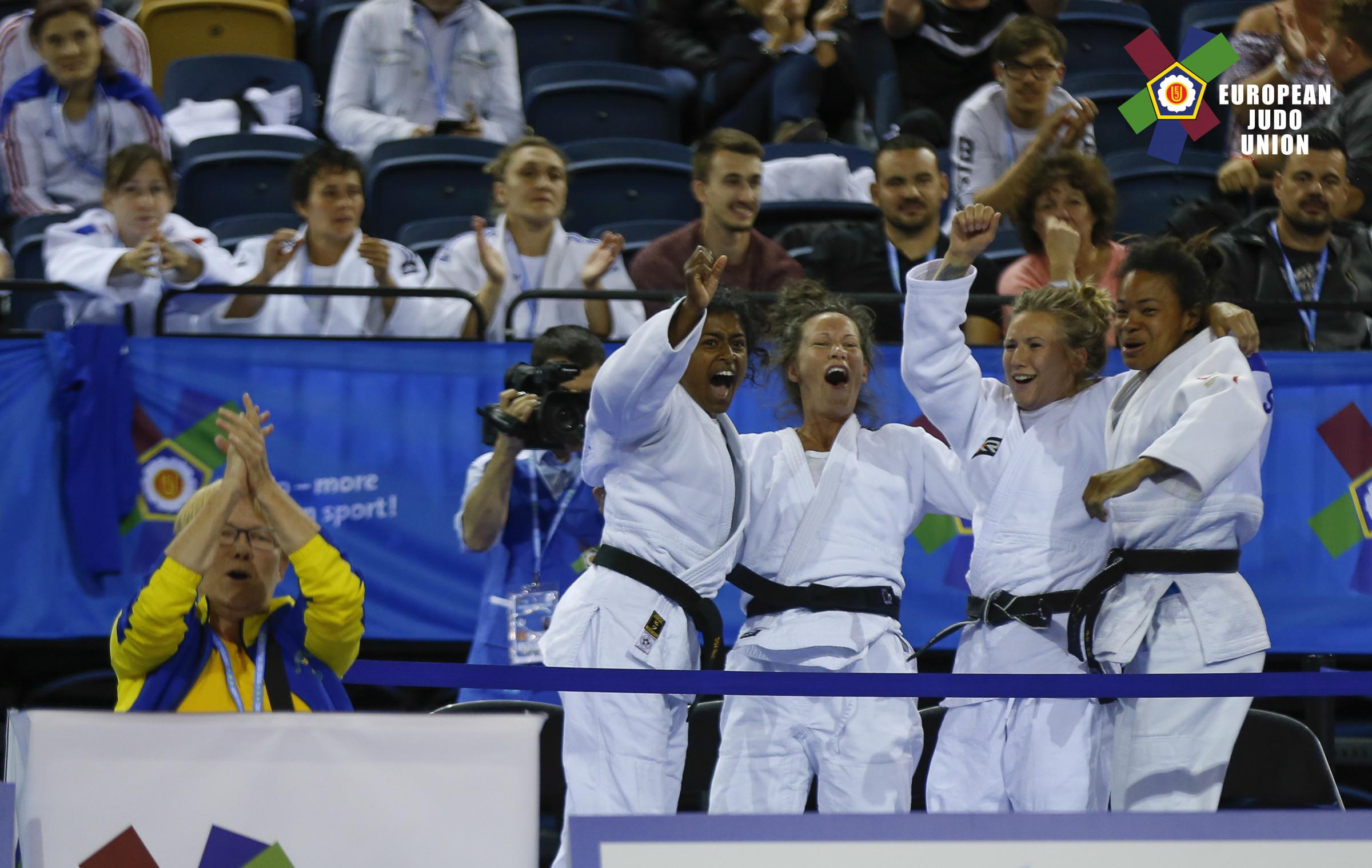 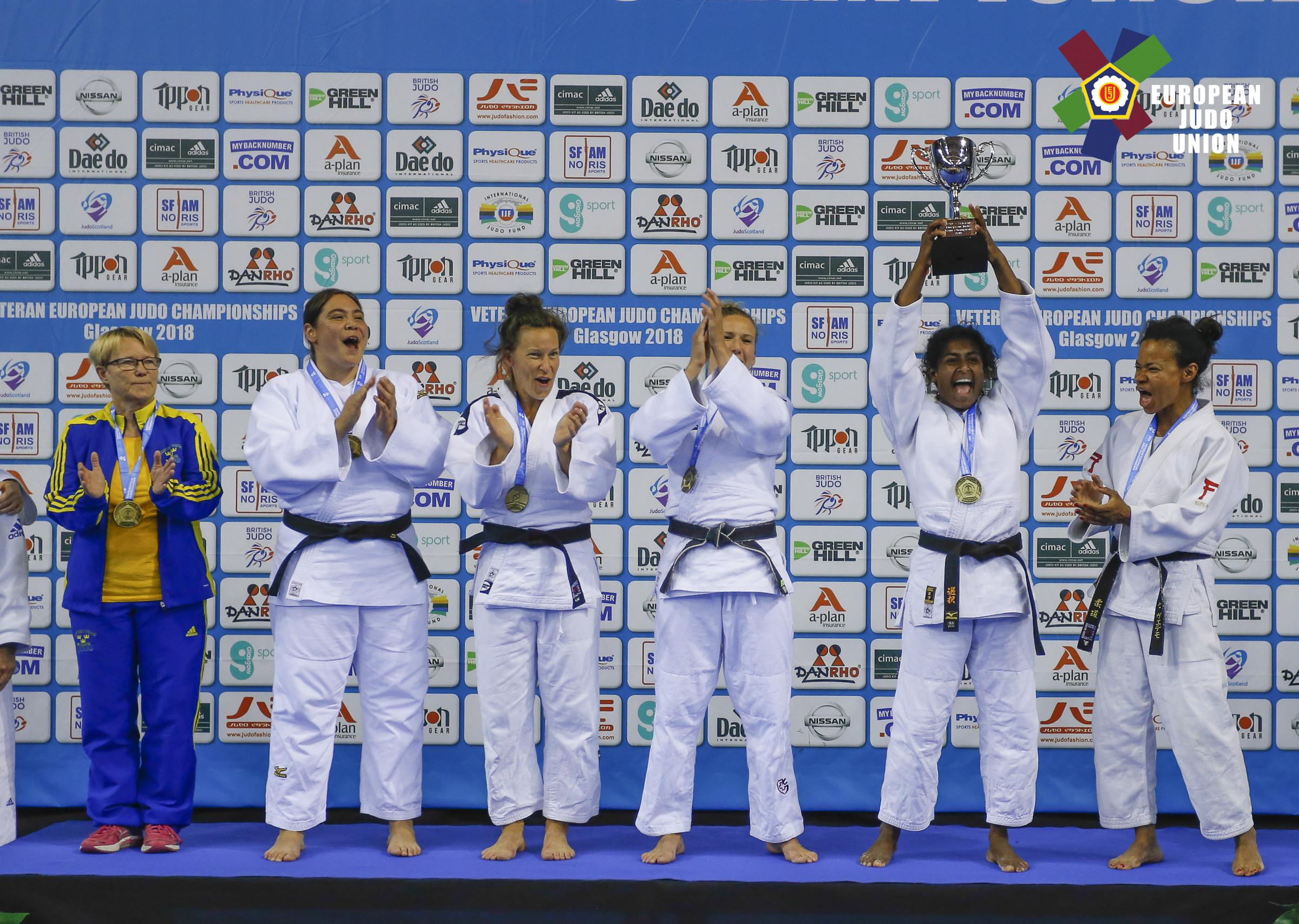 We’re off to Gran Canaria!

The closing ceremony today saw the offical flag hand over from the Chairman of the British Judo Association, Ronnie Saez, hosted by European Judo Union Vice President Jane Bridge. The Veteran European Judo Championships 2019 will be hosted by Gran Canaria. 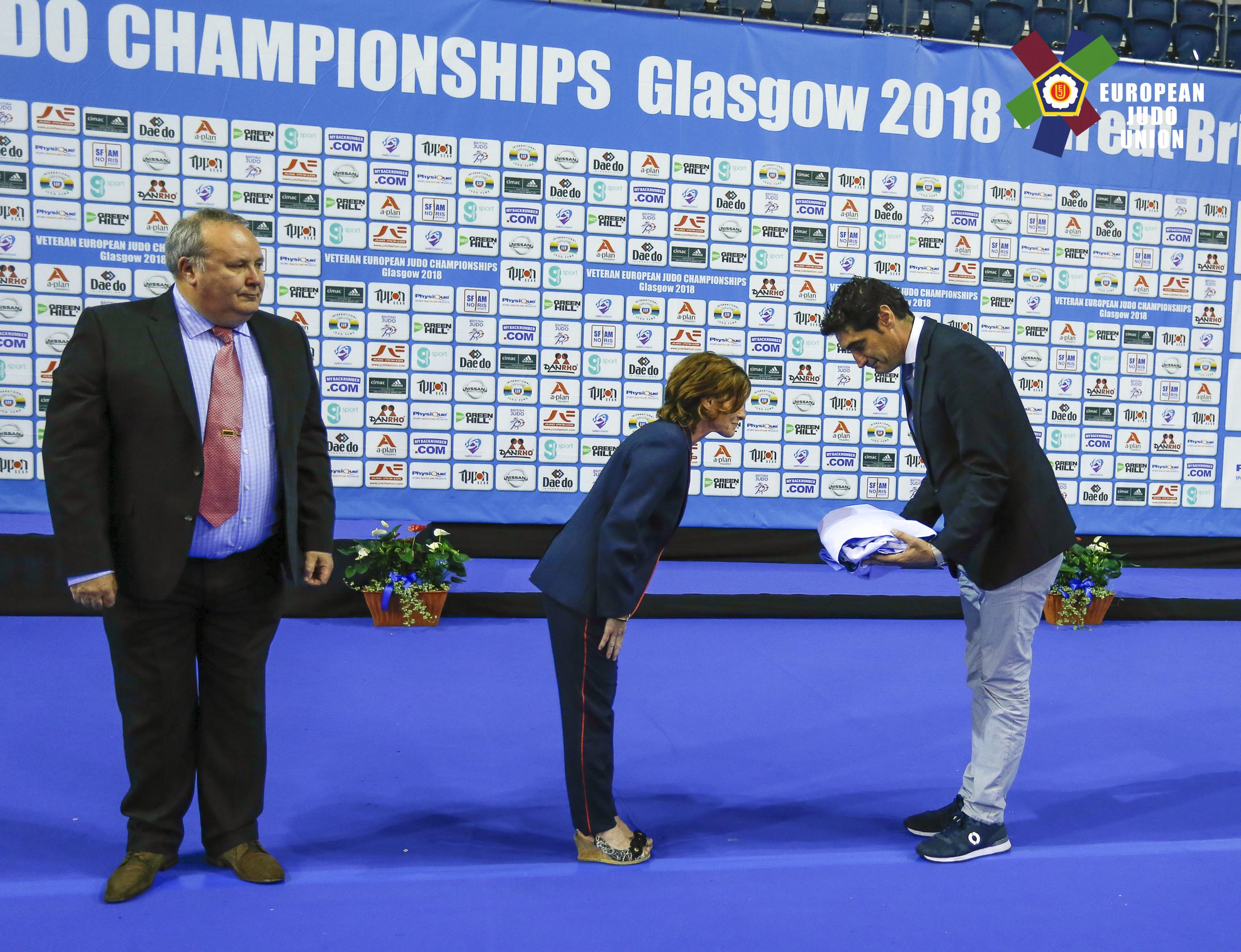 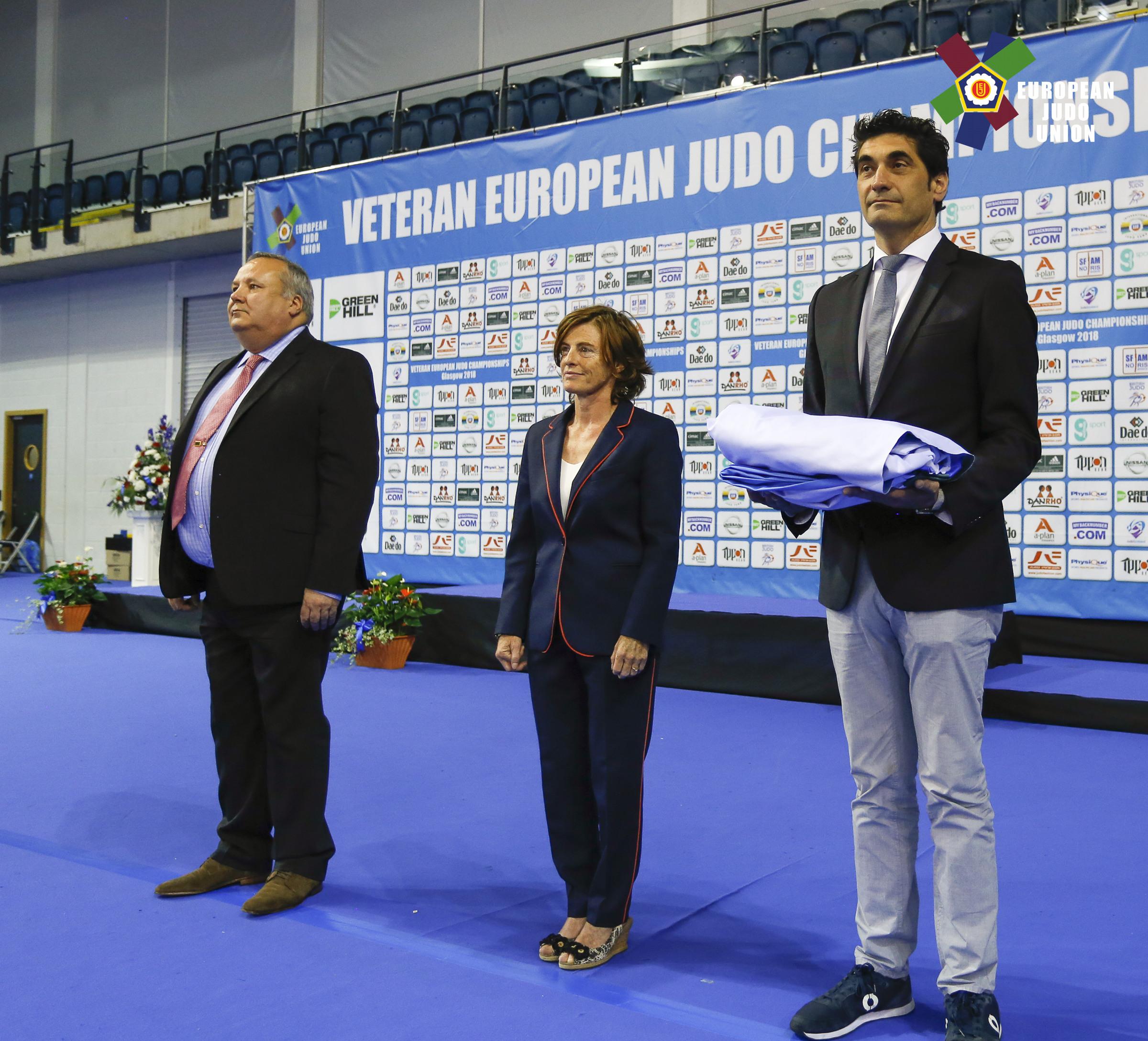 A huge congratulations to the medallists and a tremendous thank you to all those competitors, coaches and family members that travelled to Glasgow for the event. An EJU goal is to improve the engagement of athletes within this sport over the age of thirty. Year after year, incredible amounts of entries surpasses the last and we expect this will carry on in the future as our community continues to grow.