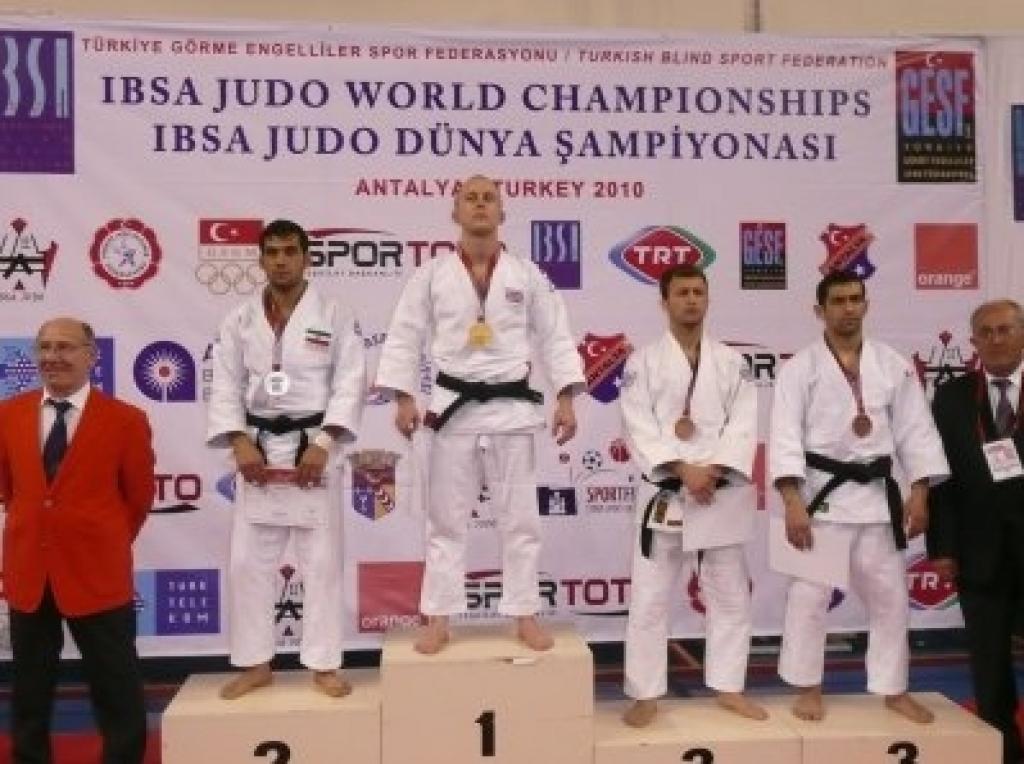 Quilter, 28, who trains at the British Judo Performance Institute in Dartford, is also only the fifth Brit ever to hold the title – the last being Simon Jackson MBE in 1998.

This is the first medal for the six-strong British team, just one day into the IBSA VI World Judo Championships.

Immediately after stepping off the rostrum, Ben said, “I feel really proud to be at the top of the rostrum with the other medallists – all who are Beijing Paralympic medal winners. This feels out of this world!”

Quilter was not phased having to fight the opening fight of the tournament in Antalya, Turkey in the -60kg weight category. He swiftly dispatched his Venezuelen opponent with an efficient shime-waza on the ground within the first half a minute.

His second fight saw his opponent, Staselka of Belarus, being disqualified for repeated defensive play. Progressing to the quarter final, Quilter faced Zasyadkovych of Ukraine. The fight was close, with both players scoring, but Quilter held on to win a place in the semi-final with his superior waza-ari score against the Ukrainian’s yuko.

In the semi-final, Quilter faced his old rival, Beijing Paralympic bronze medallist Ramin Ibrahimov of Azerbaijan. After getting thrown for a yuko score against him, he kept his focus and threw Ibrahimov for ippon to end the contest.

Talking of his win against Ibrahimov, Quilter said, “I was really pleased to beat him in the semi-final, he has beaten me at both the Paralympic Games and at the Europeans before, so I was chuffed.”

In the final, Quilter earned his World crown in style throwing then holding down his opponent Eigdar Habiboll of Iran.

This is a career best for Quilter who had previously finished in 5th place on two occasions at this event.

“This has put me in good stead for the 2012 Paralympic Games and really boosted my confidence,” said Quilter.

“Along with my gold medal at the VI German Open, I couldn’t have had a better start to the year. I hope to keep the momentum, keep getting better, and do the same in two years time in London.”

Paralympic Programme Manager, Dave Sanders said, “This a fantastic result, a result that has come from all the hard work and dedication that Ben has put in. He dominated the weight category, showing great skill and will put him in great stead, guaranteeing Ben as one of the top seeds in London 2012.”

Margaret Hicks, Performance Director, said, “Not only did Ben win the World title, but the manner in which he won every fight was world class.”

The other Brit also competing on day one of the Championships was Darren Harris who was knocked out in the repechage.