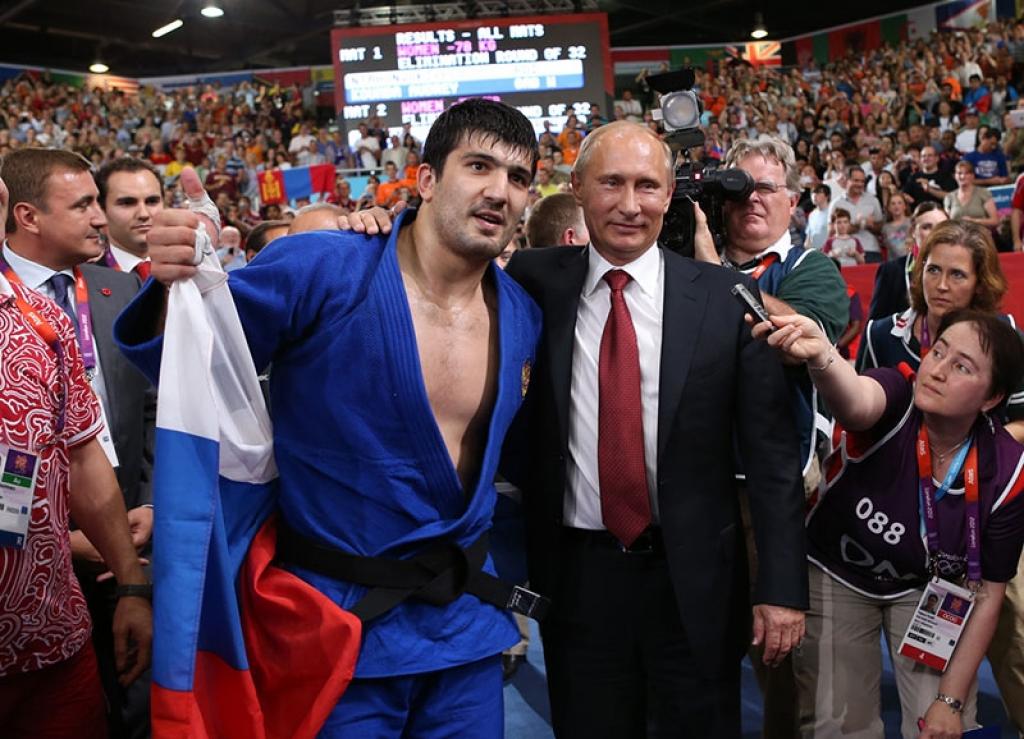 Vladimir Putin, President of the Russian Federation, and David Cameron, British Prime Minister, were in ExCel to witness an incredible display of judo on the sixth day of the 2012 Olympic Games.

Mr. Putin, who is also Honorary President of the International Judo Federation (IJF) and the European Judo Federation, congratulated the Russian men’s team and Tagir Khaibulaev, who won the gold medal for Russia in the U100kg division. This was Russia’s third gold medal of the judo and fourths in total. What a success for Europe again today with a silver medal for British Gemma Gibbons, witnessed by PM Cameron.

European President Sergey Soloveychik was congratulated by Mr. Putin after Khaibulaev won the third gold for the Russian team. Last time that the Russian President was at an event was at the 2010 European Championships in Vienna.

Mr. Putin, who started judo when he was 11 and is a black belt, was at an Olympics for the first time to watch judo. It was a fantastic atmosphere, with several incredible Ippons.

Kayla Harrison made history when she won the first ever judo Olympic gold medal for the USA. In the final she defeated Gemma Gibbons of Great Britain, who had been in fine form all day. Gibbons won the first Olympic medal for Great Britain in judo since 2000 when her current coach Kate Howey won silver in Sydney.
Gibbons had the honour of being congratulated by Mr. Cameron after the contest.

IJF President Mr. Marius Vizer, who welcomed both Mr. Putin and Mr. Cameron said: “It was a big celebration for judo. The biggest leader in the World – Mr. Vladimir Putin – as well as the British Prime Minister David Cameron, were with us for more than three hours. It was one of the best days of judo here in London.”

“We had a very high quality of judo, with lots of ippons and spectacular victories,” added Mr. Vizer and we had representatives in the finals of both Great Britain and Russia.”

“The emotion was very high and all the fights of the final block were just incredible. Our guests, as well as the entire audience was involved in an enthusiastic atmosphere, which ended like fireworks.”