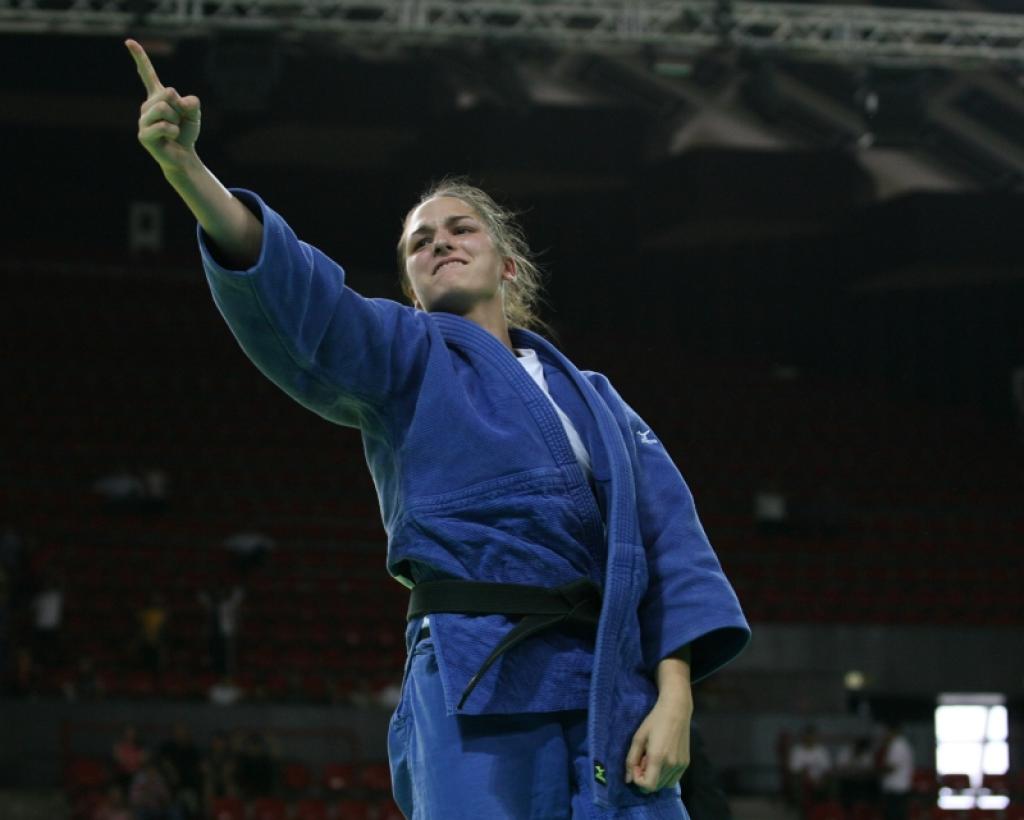 The World Cup in Warsaw was a great breeding ground for the neo-seniors who are trying to win a spot among the best fighters of Europe. The most talented women where gathered in Warsaw to measure who is ready to candidate for the European Championships selection later this year in April.

The category U63 was a victory for Dutch Esther Stam who won her second World Cup in her career. Stam earlier won in Lisbon last year. Today she defeated European U20 Champion Edwige Gwend of Italy. Stam however is a previous U17 and U23 European Champion herself and already quite experienced at the age of 22. Stam won by waza-ari against Gwend who is trying to get a recognized place in Europes best fighters in this class. But the competition is tough U63, witnessing the fact that Stam is Holland’s number three behind Elisabeth Willeboordse and Anicka van Emden.
In all honesty the World Cup in Warsaw was an excellent platform for the neo-seniors to get their necessary rhythm to concur the best in this class.

In the U70 kilogram class another Dutch in the final, but European U17, U20 and U23 champion Linda Bolder lost to 23-year old Irene Marzok from Germany. Marzok finally won her first World Cup in her career after three bronze medals in Lisbon, Birmingham and Sofia. Mother Irina Marzok, a double East German Champion, can be proud of her two judoing daughters Iljana and Katharina. Now Iljana won the tournament by a great ippon just after the golden score was started.
Marzok faces competition in Germany from Claudia Ahrens, Alexandra Sebald who finished 7th today, Hilde Drexeler who finished 5th and not in the least the undisputed number one Claudia Malzahn who the GP of Düsseldorf last week.

U78 kilogram Abigel Joo (pictured) took the title in Warsaw in this new category. Joo, who became European U23 Champion last year U70kg now defeated the competition in this heavier class. All in all she needed five matches to be crowned as champion, her second World Cup win after Sofia last year. Joo beat two Canadians in the final phase. Amy Cotton in the semi final, Catherine Roberge in the final. Too bad for the Canadian women who have won just 7 World Cup ever in their history, but lost 23 finals including today’s.
27-Year old Roberge is well experienced is fights for 10 years now her competitions in Europe and won 9 World Cup medals between 2003 and 2010.
Joo took the lead from the start and could defend her waza-ari lead the whole match to win the gold.
Joo took the first Hungarian golden medal in World Cups this year.

The plus class was the exception where the more older and experienced judoka where leading. 29-Year old Eva Bisseni took revenge of her lost final +78kg last week in Düsseldorf. The French mother is in a good shape and defeated Gulzha Issanova from Kazakhstan in a tough match where it was equal for a long time.

The Polish crowd was happy to celebrate a home medal when Urszula Sadkowska took the bronze medal in this category, although she needed the golden score in her bronze match against Belousova who got a penalty in the last seconds. Sadkowska shared the stage with Gulsah Kocaturk (TUR).

The Netherlands wins the medal tally with one gold medal and two lost finals, just before France, Turkey and Romania.