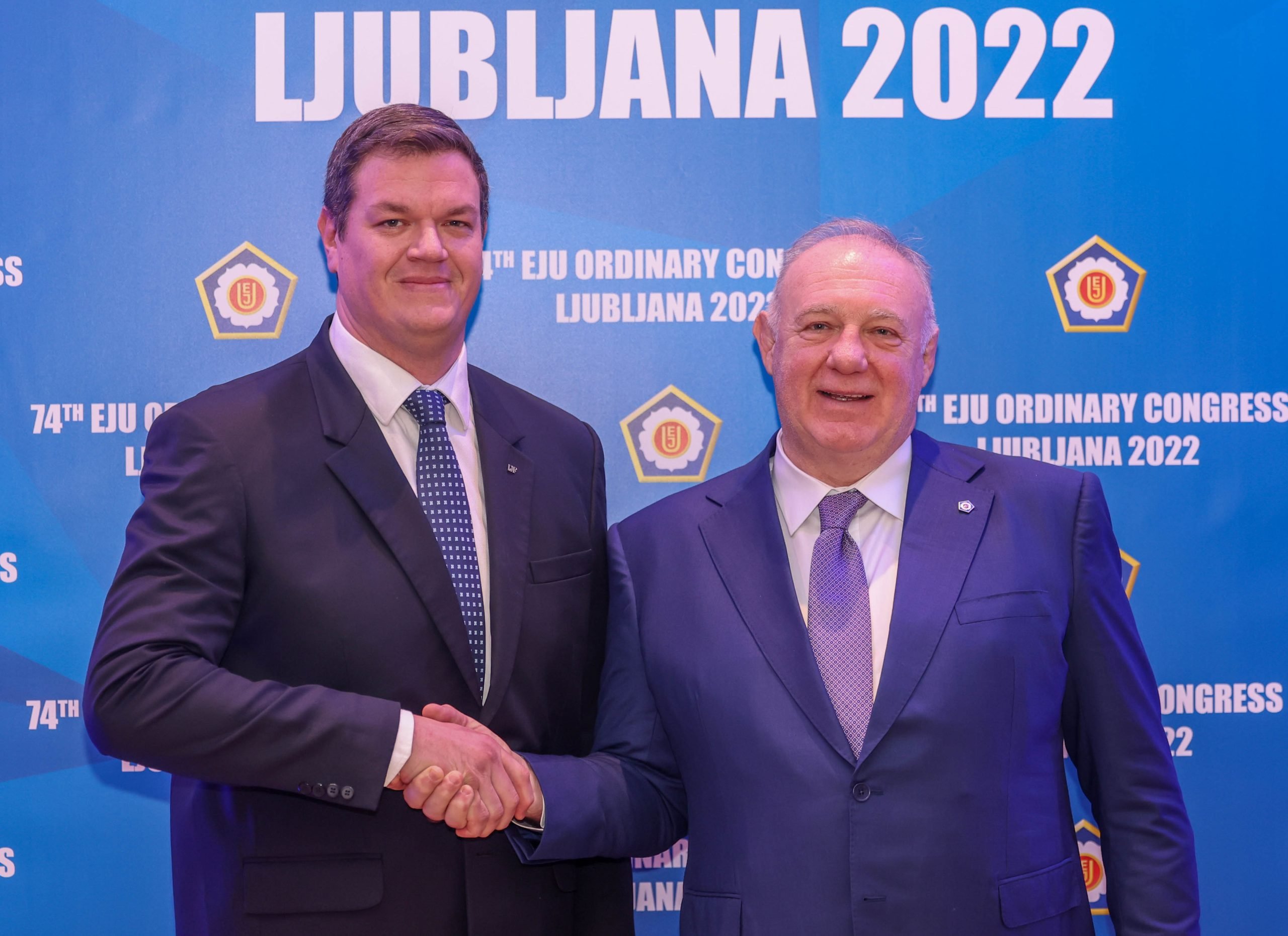 Saturday, 10th of December, was an important day for European Judo with the 74th Ordinary Congress taking place in Ljubljana, Slovenia. It was the official closing of a special year, that also saw a new team leading the biggest continental Judo Union. 46 out of 51 member federations, as well as honorary guests like IJF Vice President and Pan American Judo Confederation President Carlos ZEGARRA PRESSER, were present.

The year 2022 will be remembered as a specially challenging one. But despite all the difficulties still going on, it also showed, that Judo really is more than sport. As European judo family, we concentrated on working together. We not only delivered wonderful events together, but also established a new atmosphere and closer partnerships – within our European family as well as the International Judo Federation. I believe that cooperation is key to success, so we will definitely continue this path in 2023 – and I firmly believe doing so, Judo can also send an important message to society.

After the initial address, all reports – by the President, General Secretary, the three Vice Presidents, the Refereeing Director as well as the General Treasurer – were approved unanimously. As were the minutes of the previous Ordinary Congress in Istanbul 2021 and the Extraordinary Congress in Vienna 2022. In addition to that, the Executive Committee members also delivered future plans in their respective sectors.

With the pandemic hopefully behind us, in 2023 we can finally start with full power again to host more than 100 events together with our member federations. We will also start a support project for athletes, where the goal is of course the best possible results at the upcoming World Championships and Olympic Games. Another important project is the beginning of a close cooperation between the coach, athlete and referee commission.

A better understanding for each of those three parties is also what should be achieved by the very first joined meeting between coaches and referees, which will take place during the Olympic Training Camp in Mittersill in January. On top of that, Refereeing Director Alexandr JATSKEVICH also wants to raise the quality and quantity of European Referees in 2023:

Exactly half of the 54 referees who were active on the IJF World Tour in 2022 were from Europe. So, at the top of the referee pyramid, we are doing great already. But in 2023 we also want to attract and educate a new generation of referees. We want to give young and aspiring referees from national federations the chance, to not only learn from the very best, but also to prove themselves on international level.

Providing continuous education is what Vice President Sergei ASCHWANDEN also wants to ensure in the future:

Since we do have a whole new team in the education department, in our first six months we put the emphasize on listening to national federations and understanding the different needs.  Now we focus on fixing the priorities like an intensified collaboration with IJF and building close partnerships within the European Judo family. Therefore, we are developing a strategy based on best practice experiences – with the ‘national federations workshop’, we held in the run-up to the congress, being the first step. The implementation of Kata as an education method for children is also a big goal for the future. And of course, we also want to ensure with tools and framed guidelines, that all our member federations have the same level of education.

Helping the national federations reaching new levels is what Senior Vice President Otto KNEITINGER had in mind too, announcing the introduction of a supportive programme at the last Ordinary Congress:

I made a promise in Istanbul and whenever you make a promise, you need to deliver. One year later I am glad to tell, that we were able to do that, with providing more than one million euros to our member federations via our pandemic program. This was a family act with the help of our suppliers and partners, but in the end turned out as a win-win-situation for everyone. In addition, we were also able to give 150.000 euros via a solidarity fund to federations that were having real problems in 2022. Next year we will continue to promote Judo all over Europe with projects like the offering of free high-level steaming production for ten additional tournaments, the creation of additional social media channels to reach new target audiences and a special marketing project focusing on the road to Paris 2024.

General Secretary Dr. Martin POIGER had good news too, with announcing the prolonged financial support of the Austrian government for the EJU Head Office in Vienna.