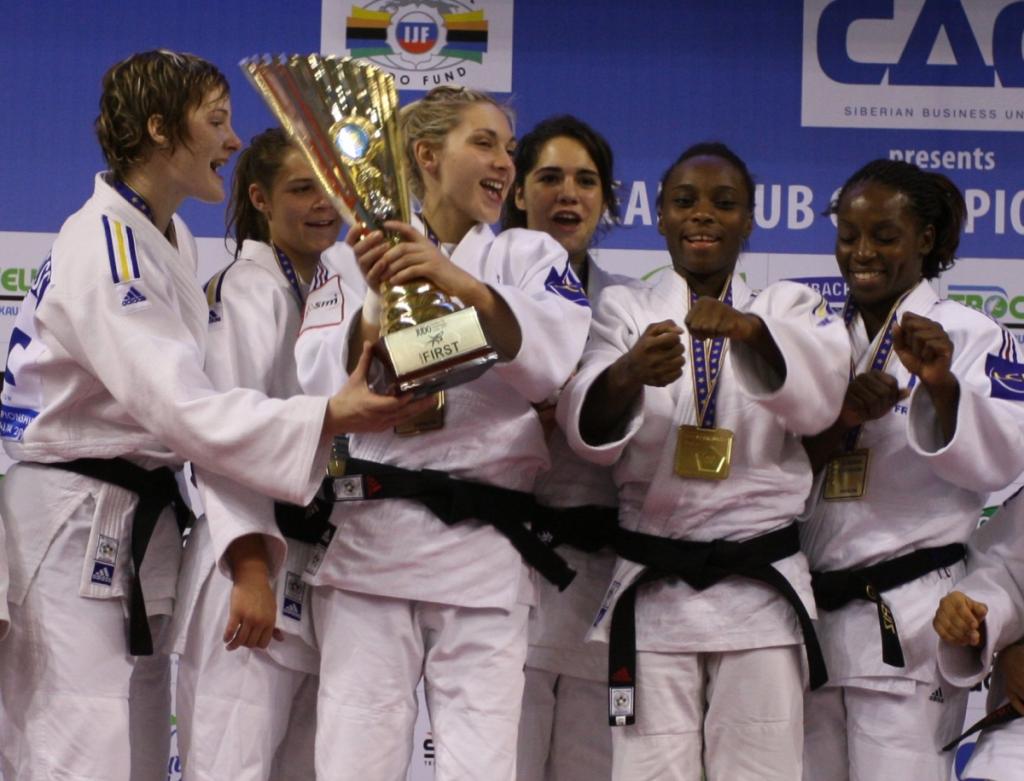 Levallois started with a win by Priscilla Gento who decided the match by ippon after 3.5 minutes against Delphine Delsalle U52kg. Automne Pavia and Audrey La Rizza know each other well, but La Rizza used to fight in the U52kg category but fights U57 since last year. The taller Pavia won the match one minute before the end and put Levallois at 2-0.

World Champion Gevrise Emane confirmed the supremacy of Levallois against Emmanuelle Payet U63kg although the strong Payet gave tough resistance but couldn’t prevent a waza-ari difference which meant the victory for Levallois. The team coached by Christian Chaumont lost the fourth match as Marie Pasquet scored for Red Star Champigny, but Lucie Louette finalised the score to 4-1 defeating Emilie Andeol.

Levallois won the European Cup in 2003 and last year the European Club title, not even speaking about the men’s team that was superior too.

For the bronze medal in the women´s category Vienna Samurai of Austria and Pontault Combault from France battled. Pontault Combault with strong French women such as Elodie Grou and the strong and experienced Stephanie Possamai as icing on the cake they won the bronze medal. For the French team an easy victory by 5-0.
Pontault Combault lost the semi final against Red Star Champigny by 4-1 but was able to beat Kocaeli BSB Spor in their first meeting. A fourth consecutive medal for the French team that was finalist in 2009 and won bronze as well last year in Orleans.

The second bronze was for the Turkish team of Izmir BSB Spor. The team of Izmir defeated French team Villemomble Sport by 3-2 after lightweight Derya Cibir took the first win. Villemomble has World Champion Audrey Tcheumeo in the team but if the lightweights did well, the danger of Tcheumeo was disarmed. It was Izmir Spor that took the initiative and in an exciting match Esin Taskaya made the difference U70kg by defeating Leila Couriol to win the bronze. Tcheumeo was able to beat Gulsah Kocaturk by o-uchi gari for ippon in the last match, but Izmir Spor had the bronze.

Villemomble defeated Vienna Samurai in their first match by 4-1, but stranded in the semi final against Levallois by 3-2, but Levallois first three categories all won their matches.
Izmir Spor lost to Red star in their first match but came back in the repechage by defeating Kocaeli Spor. It’s the first time ever that a Turkish team wins a medal at the European Club Championships.

Review all photos and results here: