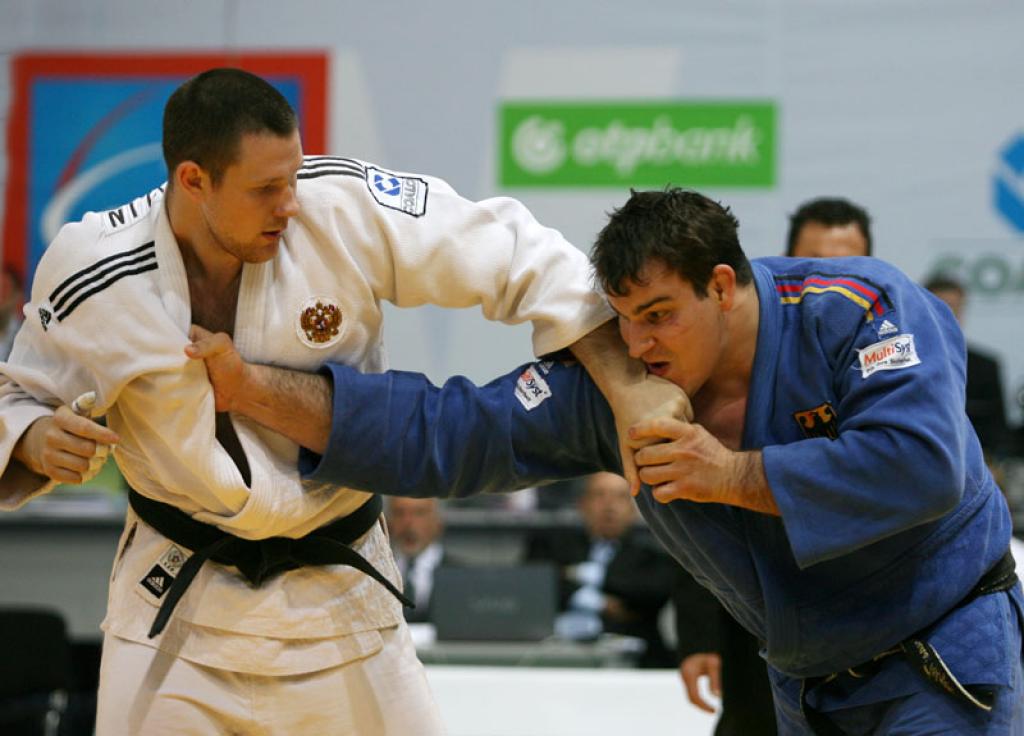 Not Romania (4) but Russia (5) has won the most gold medals at those four previous world cups, followed by Hungary (3). In the men’s category Russia, Hungary and Belarus have won 2 gold medals each, amongst them Siarhei Shundzikau (BLR) and Alexandr Mikhailine (RUS) (Left in the picture) who both won the IJF Grand Slam last weekend.

Previewing at the current participants many new talents will try to win a medal and concur with the 29 participating athletes who were also present at the European Championships in Tbilisi.
The average age however of the participants is quite young with 22 years and 5 months, quite young. We can look forward to interesting matches with some new champions in Bucharest.

Unfortunately home favourite and bronze European medalist Daniel Brata will not start, but another local star appearing in Bucharest will be national champion Daniel Matei (22 years).
21-Year old Aljaz Sedej (SLO) was one of the few to win a medal in Tbilisi. This weekend they can prove if it was either a highlight, or a growing peak towards the World Championships in August in Rotterdam.

Despite the young average age, the public can be curious for the performances of two home classics; Valeriu Perdivara, aged 38, as well as Gabriel Munteanu, now 36 years. Both have won more than 10 national titles, and multiple World Cup medals.
But the public can also enjoy Romania’s youngsters like Adrian Daroti (18), Catalin Bratulescu (18), Vladut Simionescu (19), Christian Stanciu (19), Stefan Bichisan (19), Alexandru Nedelcu (19).
Good chances for a Romanian medal will be in the hands of Daniel Brata and Daniel Matei (both U100). Matei was 3rd at the U23 Europeans in 2008. Dan Fasie is already experienced at the age of 22. He won both the European U23 as U20 title, but never won a World Cup medal, this is his chance.
Fasie is actually World Champion already. In December 2008 he became World Police champion in Tripoli. Let’s see if he can manage the expectations this weekend.

Join us at http://www.eju.net on Saturday and Sunday with live results coverage.