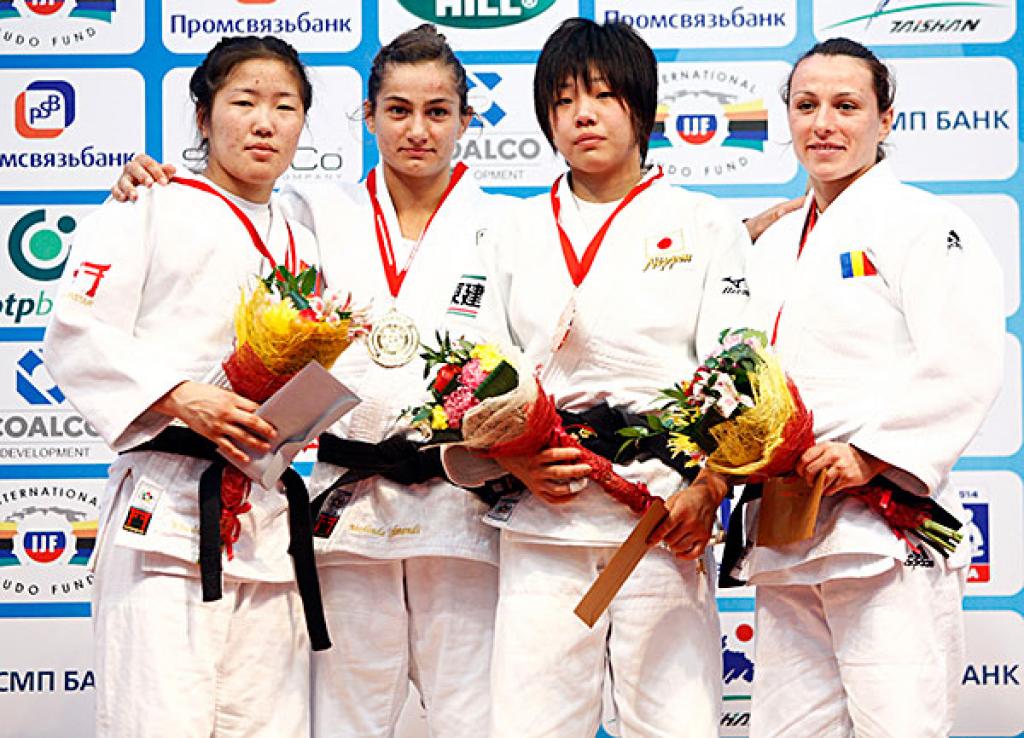 At the first day of the World Judo Masters in Tyumen, the Asian judoka were very strong. Europe was able to win one gold medal by means of Majlinda Kelmendi of Kosova.

The youngster defeated three opponents in Laura Gomez (ESP), Andreea Chitu(ROU) and Tsolmon Adiyasambuu (MGL) in the final.
World number one Majlinda KELMENDI (KOS) celebrated her latest success in Tyumen after producing a polished display to topple Baku Grand Slam silver medallist Tsolmon ADIYASAMBUU (MGL) in the final. Paris Grand Slam silver medallist KELMENDI pressed for an opening and pounced when a weak attack from ADIYASAMBUU was countered with a foot sweep for a yuko. KELMENDI coolly kept her opponent at bay to protect her advantage and take the title.

The first bronze medal was awarded to Andreea CHITU (ROU) after Jaana SUNDBERG (FIN) was forced to withdraw after a strong attack from CHITU saw her knee accidentally hit SUNBERG’s collide with SUNDBERG’s face. The second bronze was won by MIYAKAWA, Takumi (JPN) who threw European bronze medallist Laura GOMEZ (ESP) with a makikomi and such was the impact the Spaniard tapped out from MIYAKAWA’s transition into a kuzure-kesa-gatame.

Europe claimed 11 medals in total at the first day. One gold, three silver and 7 bronze, a better results than last year.

Nyam-Ochir SAINJARGAL (MGL) conquered Dex ELMONT (NED) in a repeat of their London 2012 bronze medal contest. World number one SAINJARGAL and world number three ELMONT were both active in the early stages as they looked set to avoid going the distance in Tyumen. However, as the contest progressed they proved equal to each other’s threat and ELMONT’s decreasing work-rate in the latter stages was the difference as he received two shido scores.

In Elmont’s semi-final the Dutchman reacted brilliantly to being thrown for a yuko by escaping a resulting kesa-gatame to demonstrate his own oksaekomi-waza as he trapped Navruz JURAKOBILOV (UZB) with a kami-shiho-gatame and kept him there to win by ippon.

European Champion Automne PAVIA (FRA) was by Sumiya DORJSUREN (MGL) with a gutsy performance in the -57kg final. London 2012 bronze medallist PAVIA fell behind to a yuko and despite her endless endeavour the frustrated French star failed to register a score of her own. In the semi-final PAVIA bested Being 2008 Olympic bronze medallist Ketleyn QUADROS (BRA) to win by a waza-ari. The first bronze medal was won by world number three Corina CAPRIORIU (ROU) who left it late but finally broke QUADROS’ resistance in the final minute to score a yuko and then throw her for ippon. The second bronze medal went to Telma MONTEIRO (POR) who was handed victory via shido scores accumulated by YAMAMOTO.

Paris Grand Slam bronze medallist ABE Kana (JPN) sprinted to the top of the medal podium as she defeated world number two Yarden GERBI (ISR) in just 22 seconds with a juji-gatame. The in-form GERBI was defeated Kathrin UNTERWURZACHER (AUT) in the semi final.

The first bronze medal was clinched by VAN EMDEN as she received one shido penalty compared to the two of Edwige GWEND (ITA) in a nervy contest.

Marius L. VIZER, IJF President, said:  “The World Judo Masters is one if the highest level competition in judo because the best 16 athletes are taking part in each category. Only two events can beat the masters: the world championship in quantity and the Olympic in quality.”

EJU President Sergey SOLOVEYCHIK said on behalf of the EJU and Russian Judo Federation I’d like to thank the judo federation of Tyumen for conducting such a high level event that we’ve enjoyed today and will do so tomorrow. We wish the Tyumen judo federation prosperity and success for the future. I wish good luck to all the athletes. I also wish my friend Marius VIZER, IJF President, well in his bid to become the SportAccord President next week. The whole judo family is united in supporting our leader in what would be a huge moment for judo and sport in general.”