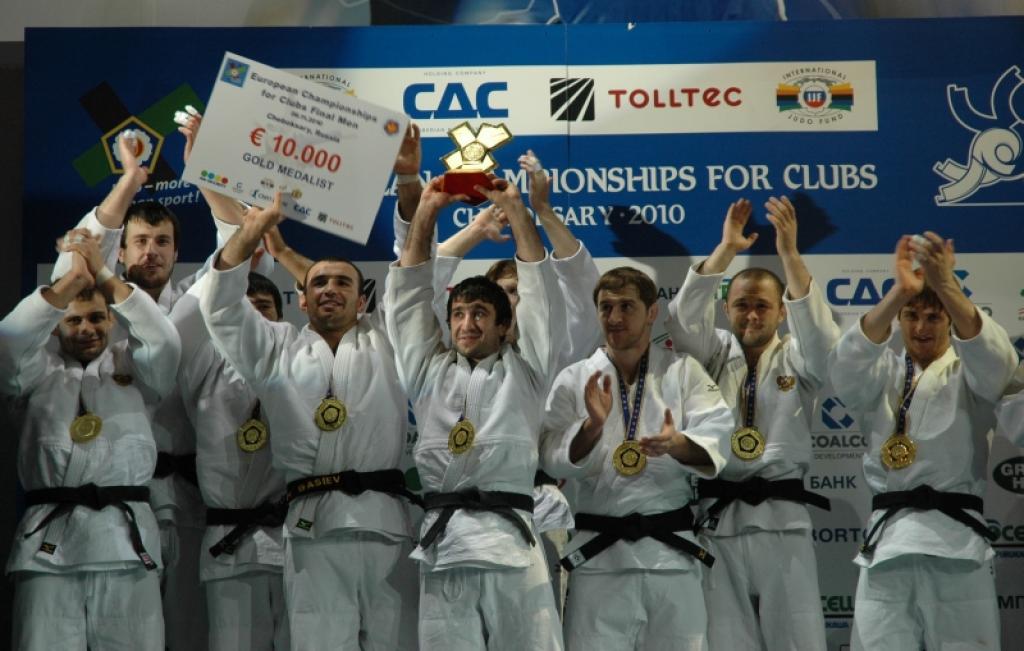 Yewara Newa has won the European Championships for Clubs in Cheboksary. The Russian team prolonged last year’s title and it’s their seventh title since 2001. The Russian defeated Kocaeli Belediye Kagitspor in the semi final in the morning session twice by 5-0 and 3-2 and in the final Yewara Newa was victorious over Saint Genevieve Sports. The French team lost the final by 5-0 2-3.

The Russian team was the favourite in advance. With many World Championships participants they had a great line-up. Musa Mogushkov won all three his matches and one match he was replaced by Alim Gadanov who won his match too. Mansur Isaev won two out of three matches and drew one. U81kg Ivan Nifontov won all his three matches and in the first match against the Turkish Team of Kocaeli European Champion Sirazhudin Magomedov started in this category.
Murat Gasiev and Kirill Denisov split both matches U90kg and in the heavyweight category Tagir Khaibulaev (semi final) and Renat Saidov (final) both fought two matches. What a choice this team have.

Nonetheless also in other teams came up with star judokas. Abensberg, traditionally strong in the European Cup finished third today after their loss against Genevieve. The German team led 3-2 after the first five matches but the French fought back and won 4-1 against a weaker line-up of the German’s.
David Larose won both his matches as well as Mohamed Riad. Both played an important role in reaching the final. Laurent Solomon who lost to Ole Bischof now was victorious over Sven Maresch in a decisive match U81kg.
Only Ilias Iliadis fought both his matches on behalf of Abensberg and won them, but Andreas Toelzer who won the first match for Abensberg was replaced by Lasha Gujejiani who was defeated by Mael Le Normand after Abensberg didn’t have a chance to win the match.

Yewara Newa had a much easier match against Kocaeli. The Russians led 8-0 after eight matches and both Ukrainian fighters Vadim Synyavskiy and Stanislav Bondarenko won both last two matches making a final result of 8-2.

Coach Vitali Makarov of Yewara Newa left Isaev and Denisov in the starting line up in the final and started with Gadanov against Larose. The experienced Gadanov won by ippon which was a good start. Isaev scored 2-0 against Riad and with Ivan Nifontov and Kirill Denisov you know you have good papers. Renat Saidov won the fifth match. The return match started with a victory of Musa Mogushkov meaning the prolongation of the title for Newara Newa. After the decision only Ivan Nifontov didn’t lose his second match making a final score of 7-3. For the second time a in row a French team reached the final, after Levallois last year, but Yewara Newa simply have the best choice.

More news and interviews from the athletes can be expected later.

Watch the photo impression in our media gallery.
You can download the complete line-ups in the result section.