Young and old cheer for Mia Hermansson in Boras 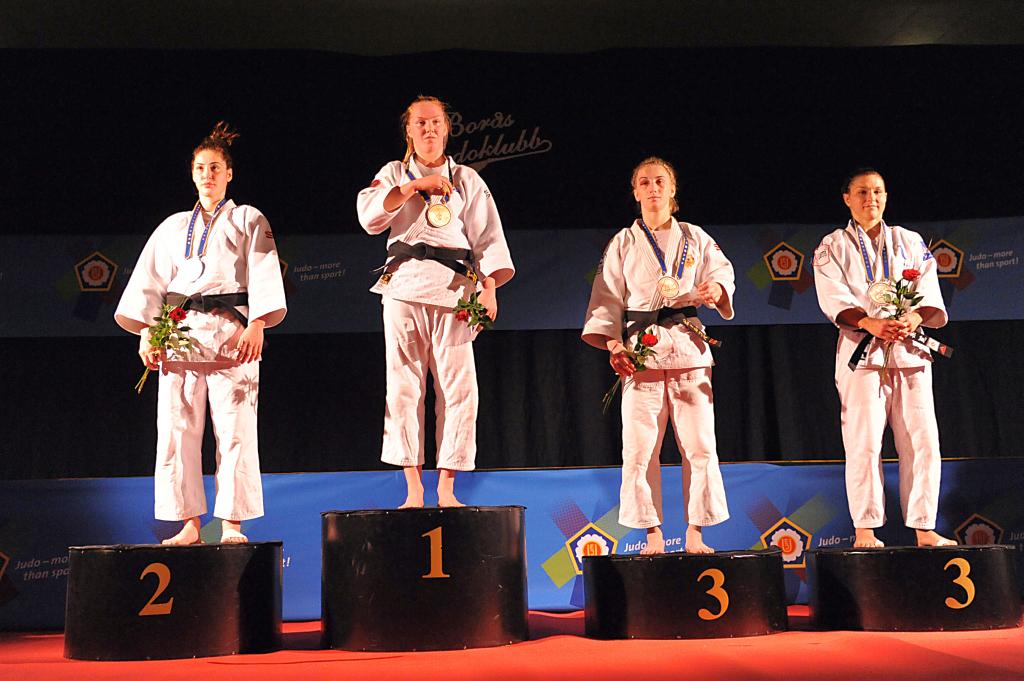 Russia is leading the medal table after day one of the European Cup for Seniors in Boras.

The Russian men won two gold medals, and Anastasia Polikarpova won the gold for women U57kg. In the final she defeated German Amelie Stoll. Germany won silver U52kg too, but three women on the stage, the gold also went to Germany. Maria Ertl won her second European Cup this year. After success in Sarajevo, now a title in Sweden and her fourth medal this season. In the final she defeated four years younger Katja Stiebeling. Verena Thumm got bronze. Germany won two bronze medals U48kg but the gold was for Belgium. Anne-Sophie Jura defeated Mariya Persidskaya, the winner of Tampere’s European Cup. For Jura it was her first European Cup victory ever. She gained form at the French speaking Games which she won and now she was able to beat her three opponents. Most of the cheers where for Sweden’s Mia Hermansson who won all her four bouts. In the final she defeated Russian Pari Surakatova. She kept last year’s title and booked her first victory at a European (EJU) event. The 20-year old Swedish hope dominated in the junior category but this senior victory will give her confidence she can make the next step. Sweden’s Alexander Lundqvist improved last year’s fifth place and won a silver medal. In the final though he had to accept the gold for Albert Oguzov. The Russian defeated 37-year old John Buchanan in the semi final, but Buchanan knows what it is to win a small final. He won bronze at the 2001 World Championships and he’s now trying to get back in the team for the Commonwealth Games next year July. As far as we know in the more than 3,000 medals, Buchanan is the oldest ever medallist. Sven Helbing won bronze in Sarajevo’s European Cup in 2010 at the age of 37, but the Brit is 50 days older at the day of the medal. Interesting to see that young guys as Winston Gordon, Sarah Clark and Euan Burton are among the oldest medallists. Burton won the European Open in Glasgow last week aged 34, his second win in a row and in Sweden present a coach. The older the wiser as long as you judo with your head, maybe a trend, or are the Commonwealth Games so appealing? We assume it is and we will follow the comebacks. Yakub Shamilov defeated compatriot Arsen Tolasov in an all Russian final U66kg, he was the best among 21 rivals. France mingled in the top nations by getting a gold medal by Jordan Amoros U73kg. He overcame Austrian Peter Scharinger in the final. In total 18 judoka participated in this category. Watch the photos in our photo gallery, tomorrow Boras is hosting day 2.