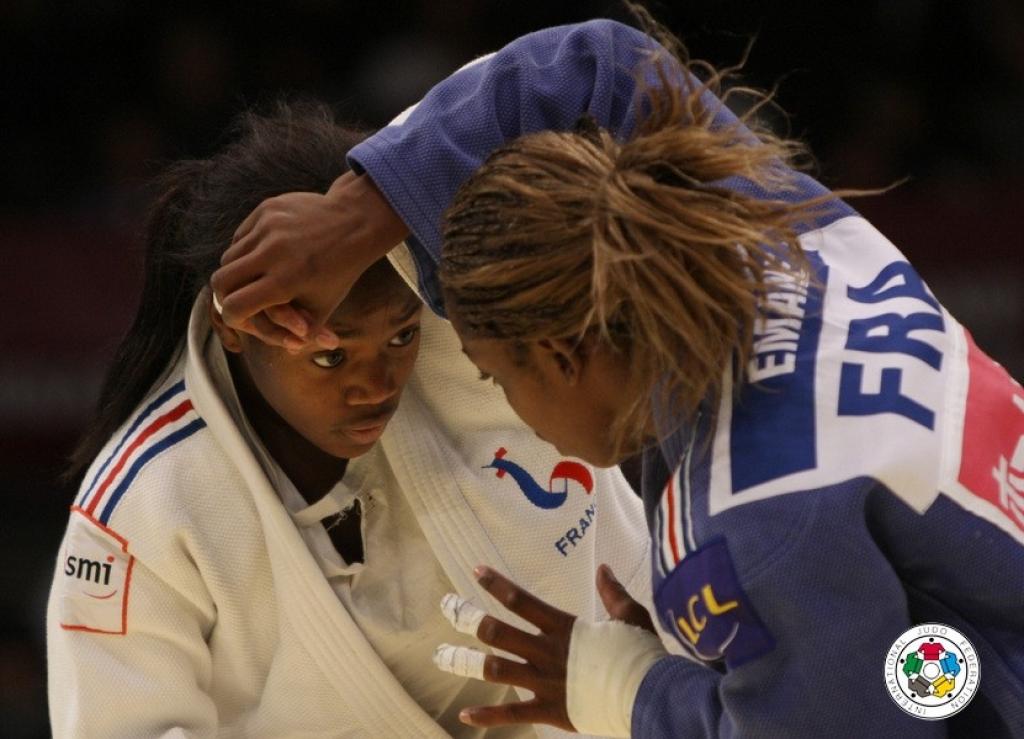 French Clarisse Agbegnenou has won the Grand Prix of Abu Dhabi in her final U63kg against Ramila Yusubova. It’s her fourth win against the judoka of Azerbaijan in major tournaments. Agbegnenou takes 200 points to France and her second Grand Prix/Slam win. In 2010 she won the Grand Slam in Tokyo. In the final Agbegnenou was leading from the start but Yusubova came back strong. Agbegnenou hit back with waza-ari and finished the job with perfect ne-waza. The youngster of just 18 years won bronze at the Grand Slam in Paris this year but lost the U20 French final against Margaux Pinot who recently won the European junior title. Agbegnenou is a spectacular talent and seems to excel at the major tournaments. Obviously she has competition of World Champion Gevrise Emane in this category for the Olympic position but with 18 years she has a bright future.
For Yusubova it was her best result too. She won three bronze medals in her career, one in Sao Paulo this year, but never reached the final but was European U17 Champion 8 years ago.

A great final on paper between Wang Ki-Chun and Yasuhiro Awano U73kg won by the Korean double World Champion. The two fighters kept eachother in balance in the first 3 minutes but Wang successfully was awarded a yuko due to a penalty for Awano. Wang had beaten Awano five times before in 6 matches and today he added the sixth after Wang successfully hold his lead. He won his 10th big IJF event including his two world titles in 2007 and 2009.
Wang defeated Spanish Kiyoshi Uematsu who took a good bronze medal. Awano defeated Rinat Ibragimov (KAZ) who won the bronze. Ibragimov was the highest ranked judoka of today according to the latest World Championships result where Riki Nakaya took the world title against Dex Elmont.

Japanese Haruka Tachimoto won the women’s U70kg final against French Marie Pasquet who lost her fifth important final in her career. In 2009 she lost the final of the IJF Grand Slam Tournoi de Paris but won this year’s World Cup in Prague. Last year in Rotterdam Tachimoto also defeated Pasquet and won the Grand Prix. The Japanese won her fourth senior event and breaks through the barriers of international senior level. The 21-year old fighter was double World Junior Champion in 2008 and 2009. None of these talents from those years were fighting in Abu Dhabi today. Tachimoto however never competed at a senior World Champion and faces competition of Yoriko Kunihara and Mina Watanabe.

In today’s final Tachimoto led after 30 seconds against Pasquet. After three minutes she scored again and finished controlling Pasquet on the ground.
She defeated four opponents today in a field that wasn’t the strongest ever. In the semi final Tachimoto was victorious over Dutch Linda Bolder who won the bronze medal, her third this year.
The second bronze medal was for China’s Chen Fei who won her fifth bronze medal this year. She lost to Pasquet who she defeated twice in one year, but the 30-year old French took revenge for those matches.

Guillaume Elmont didn’t succeed to win gold for The Netherlands in his final U81kg. The Dutch former World Champion lost the final in Abu Dhabi against Takahiro Nakai (JPN). The Japanese scored waza-ari against Elmont after three minutes in the match and built out his position with yuko.

Elmont had beaten Nakai before in 2010 but also lost in that year at the Tournoi de Paris. Elmont looked good in the final but was in the end annoyed by his impressive list of silver medals. In 2009 he lost the final in Abu Dhabi against Robert Krawczyk (POL).
30-year Elmont who suffered so many injuries is trying to qualify for his third Olympic Games.
Nakai won his fourth big title. His last win was the Grand Slam of Tokyo. At the Asian Championships this year in Abu Dhabi he finished fifth and double World Champion Kim Jae-Bum took the title. He remains the big favourite for the Olympic title in 2012 in this category.