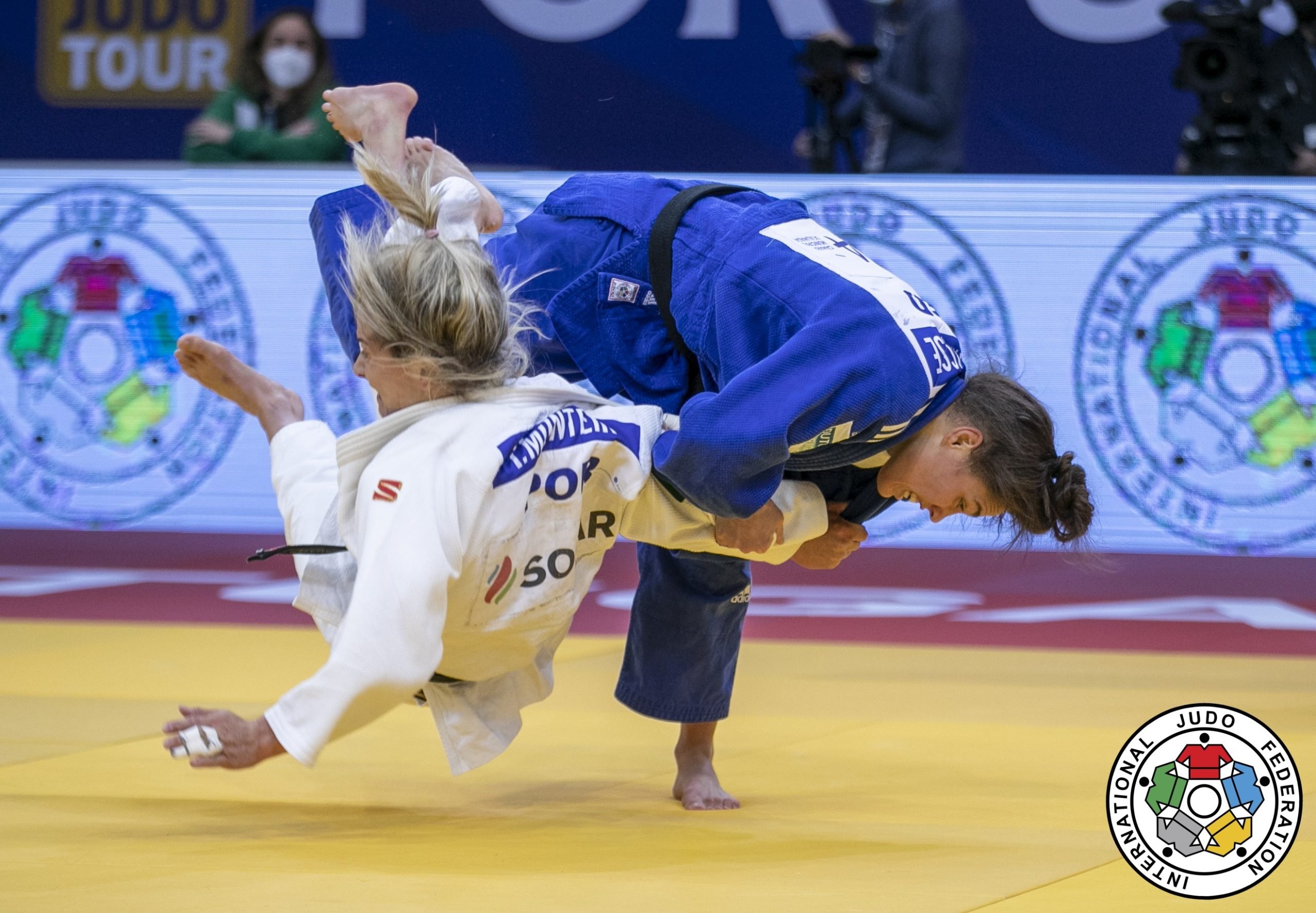 Welcome back to the IJF World Tour!

The Portuguese federation are off to a brilliant start hosting their first ever IJF World Tour grand prix event and as they hoped, have some medals to celebrate including an impressive gold from Catarina COSTA in the first final of the tournament in -48kg. The golden score contest was dominated by the Portuguese with LEE Hyekyeong (KOR) collecting two shidos and eventually suffering defeat after some swift ashi waza from Costa.

Portugal had a guaranteed bronze medal in the -52kg category as in an unfortunate turn of events, Maria SIDEROT and Joana DIOGO met in the final block. After a tough golden score head to head the medal went to the latter. One more medal was added to their lucrative day one collection by the face of the event and Portuguese hero, Telma MONTEIRO. The -57kg category proved tough and a semi final loss sent her in to the bronze medal contest, but her experience, determination and love from the crowd urged her on to stand on the podium.

Though we had some expected success from the higher seeded athletes including Distria Krasniqi (KOS) who has established herself back in the -52kg category as we approach the qualification cycle and Denis VIERU (MDA) in the -66kg category, some fantastically unexpected finalists gave us pause. Krasniqi’s final opponent Ana Viktorija PULJIZ (CRO), – ranked #52 – had a stellar day and improved on her Zagreb grand prix bronze result in 2021, her senior presence really being felt today. Pleuni CORNELISSE (NED) joined the lower ranked athletes (#51) to rise above the more senior opponents, beating Monteiro to reach the final against Olympic champion opponent Rafaela SILVA (BRA).

Freddy WAIZENEGGER (SUI) made his defeat of WRL #1 AN Baul (KOR) look easy with a quick, strong switch in ne waza, counting down the clock to his place in the final of the -66kg category against Vieru. The Swiss athlete came in as #180 in the world ranking and couldn’t quite find his footing in the final but this takes nothing away from his accomplishment today.

I’m so proud to fight the bests fighters in the world and I was of course really happy to fight a former world champion who is like a model for me was a great experience. I felt free to fight him and I was well prepared.

I felt really excited to be selected from my national team and I was really motivated to fight in my first Grand Prix. I thank my girlfriend, my family and my coach, Dominique Hischier, who supported me and prepared me well.

We have a good young team, with high motivated athletes and a good fighting spirit. We have two national centers but we work also together so it helps to become stronger.

In the lighter of the men’s categories today, Balabay AGHAYEV (AZE) was strong throughout his preliminaries and following his 2021 Paris Grand Slam win, he has looked to be promising. He demonstrated it was no fluke and took a well deserved -60kg silver.

It was certainly a day for the youth to come knocking on the door of the IJF tour to let everyone know that they’re home, just in time for the qualification period and to make sure those at the top don’t get too comfortable.