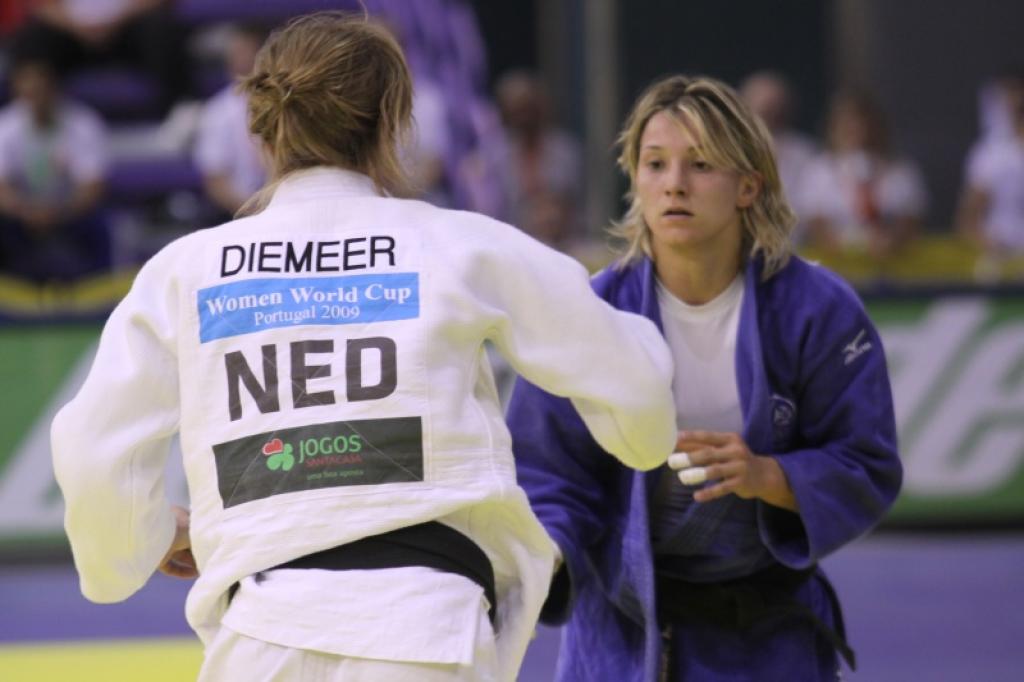 Host country Portugal can be satisfied with three gold medals. On Saturday two gold medals for Telma Monteiro (U57) and Joana Ramos (U52), on Sunday the first place for Yahima Ramirez. The home favourite beat U78kg beat French Géraldine Mentouopou, Europe’s U23 champion and gave Portugal the victory in the medal tally.
Unfortunately Olympic Champion YANG Xiuli (CHN) didn’t appear at the weigh-in on Sunday morning.
Holland finished second behind Portugal in the tally with six medals in total after Dutch Rachel Schoonderbeek and Karin van Dijk took the bronze in the U78 weightclass.

In the U63kgweight class Dutch Esther Stam beat Anne Laure Poli from France. Stam has won two European U17 titles in her career and became European U23 champion in 2007. Today is another confirmation of her talent. She won the senior Swiss Open last year and Belgium Open this year, but never a World Cup.

A German speaking final U70kg when German Elisabeth Greve beat 5 times Swiss champion Juliane Robra from Switzerland. Although Greve is 3 years younger, both fighters had both won a medal at the European U23 Championships in 2005, but had never met in a World Cup.

On saturday the Portuguese speaking countries did great. All three medals where gained by Lusophone nations Brazil or Portugal. World Junior Champion Sarah Menezes (19 years) was expected to be ranked high today. She won the U48 weight class beating WU Shugen (CHN). WU lost the World Cup in Vienna too and lost her bronze medal bout last week in Moscow. Leandra Freitas (POR) won the bronze with Wasilisa Prill from Germany.

Portuguese champion Joana Ramos was one of the favourites under 52 kilo, but her win was still a pleasant surprise for the home crowd. 27-year old Joana Ramos was the oldest winner of today. Raquel Silva (BRA) finished second.
Spanish Champion Nieva Larraya shared her stage with Susi Zimmermann from Germany.
It was the first ever World Cup win for Ramos.

On saturday no one else but Telma Monteiro was more than favourite for the victory under 57 kilogramme. But the final wasn’t so easy against Michelle Diemeer from The Netherlands, who beat well recognized judokas today. But Monteiro won by two yukos, and earned her 10th World Cup win.

Join us next weekend at http://www.eju.net for live results from Madrid and Tallinn.