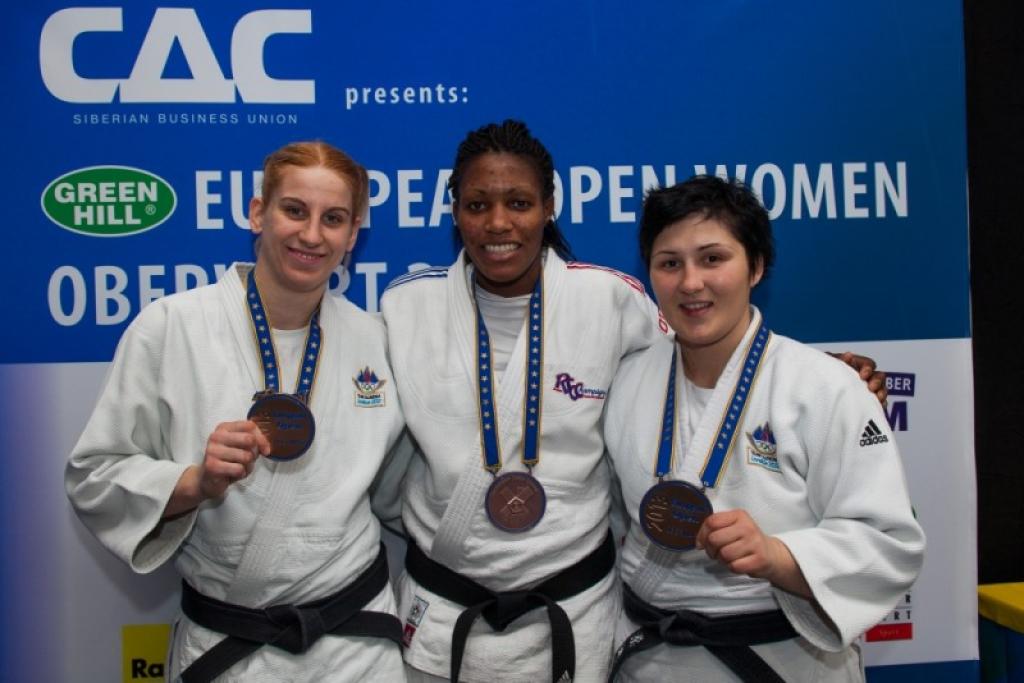 Very few European medals at the Green Hill European Open in Oberwart. Traditional actually as Asia was also very strong two years ago, the previous edition for women. Eight medals in total for Europe out of 28. The surprise medal came from Pan America this time, but actually it wasn’t a surprise at all.

The final in the category U70kg was between Kelita Zupancic of Canada and the impressive Korean fighter Kim Seong-Yeon. During the day Kim had destroyed everyone with excellent judo, but also Zupancic is good for weeks. Last week she finished second at the Grand Slam of Paris and today she was able to defend the Korean skills and scored a yuko herself in the beginning of the match. When Kim received two penalties as well Zupancic could secure her second World Cup title in her career, but more importantly again an improved with Paris. The Canadian is 22 years young and can play a role at World level in the future, that’s what she proved in Paris and even more this weekend in Austria.

The bronze went to the two Japanese participants Yoko Ono who defeated Marie Pasquet for bronze and Nunira Karen who won the bronze when she turned Valerianne Fichot to the ground who had to give up with an undiagnosed injury and had to be carried from the tatami. The 24-year old judoka was on a good way this year with silver in Arlon. In the hospital further research was done.

Korea  has the oldest and youngest winner in Oberwart

The final U78kg was won by Korean Jeong Gyeong-Mi. She defeated Tomomi Okamura in an equal final, but Okamura picked up a penalty. Jeong was the oldest winner of the weekend (27), which is actually not too old. This event was for talents mainly. Her compatriot Bo-Kyeong Jeong won U48kg on Saturday and was the youngest, aged 21.

The first bronze medal was for Slovenia. Ana Velensek was one of the two Europeans who won a medal in the final block, stating that Asia and even Pan America were absolutely amazing this weekend. The European Open is just between the strong events of Paris and Düsseldorf and the Asian teams are amazing. Not to mention that some Japanese top fighters took some rest and didn’t even fight in Oberwart. Some of the Paris medallists watched the matches from the tribune and will continue to train in Europe next week.

The second bronze was for Geraldine Mentouopou of France. In the second ‘European’ fight she defeated Viktoria Turks of the Ukraine.

The final in the heavyweight category was a nice fight between Kanae Yamabe who impressed most today and Kim Eun Gyeong. Kim was bronze medallist at the Grand Slam of Paris last week. Yamabe scored a waza-ari after one minute. Kim got back with a yuko, not enough to prevent Yamabe to take the gold. The Japanese heavyweight finished Kim off after three minutes of fighting with an excellent ippon for tai-otoshi. Yamabe booked her first victory in the world tour ever.

In the women’s heavyweight category Lucija Polavder won a bronze medal as she didn’t have to fight. Kim Ji-Joun was disqualified for this fight. Polavder was the 4th European medal winner and third of Slovenia.

The second bronze medal was a battle between two compatriots of Japan and Nanami Hashiguchi scored a waza-ari during the match and took the bronze instead of Nodoka Shiraishi.

Review the event and watch the photos HERE

For sure it wasn’t a European but World Open this weekend. Japan won the medal table with 3 gold medals, Korea 2, Canada and Mongolia both one gold medal.